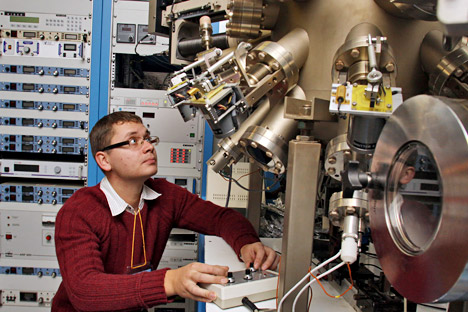 Young scientists need to work hard and make sacrifices to finish their studies and contribute to scientific progress, according to some Russian academics. Source: PhotoXPress

The International Thermonuclear Experimental Reactor(ITER) project, which involves students from the Moscow Institute of Physics and Technology, is seen as a good tool for science progress. Yet, it has recently faced several problems.

Dean of the Physics and Power Engineering Department at Moscow Institute of Physics and Technology (MIPT), Alexei Leonov, talks to Gazeta.ru about the role of large international projects in attracting students, as well as the progress with the International Thermonuclear Experimental Reactor (ITER) to which some of the faculty’s alumni are contributing.

Gazeta.ru: Do many young people want to study physics these days? What can you say about the education level of contemporary secondary school and university students?

Alexei Leonov: There is no shortage of talented high school students entering MIPT, but I must admit that we don’t have much depth in the physics department. Society in general (and young people in particular) is losing interest in the natural sciences. The prestige of the natural sciences is fading.

Even motivation is different now. When we have a new intake of students, the competition is very intense, and they are very enthusiastic. They are very motivated throughout their first, second and third years; but then they start losing interest, because real life turns out to be much more complicated than they had first thought.

Also, young people now have a certain quality: they want everything right now. But only few of them realize that you can’t have everything now; you need to work hard and make sacrifices to finish your studies and take advantage of everything that MIPT has to offer.

Gazeta.ru: So what role do projects such as ITER play in attracting students?

A.L.: If we look at MIPT’s history, we can see that it was actually created to work on major governmental projects like space exploration, the creation of ballistic missiles, the development of nuclear energy and the creation of nuclear weapons.

Specifically, our department (Problems of Physics and Power Engineering) was originally established for a research center in Troitsk that worked on controlled thermonuclear fusion. Now, many years later, we are training personnel for the ITER project. In addition to this, our alumni are involved in a wide range of large projects being carried out at different levels in Russia, including projects in laser technology and nanotechnology.

But ITER is one of our most important spheres, considering that coal and oil are known to be exhaustible energy sources. Alternative energy sources cannot compete with them in powering, say, large factories. Therefore, such major energy projects are the hope for humanity.

Gazeta.ru: Are students interested in working on such projects? What is the regulatory framework for Russian students participating in ITER?

A.L.: They are certainly interested. Unfortunately, we don’t yet have an established procedure for taking part. But our plasma power department is closely related to ITER and has already sent students for internships to Cadarache, where the thermonuclear reactor is being built, as well as to the Karlsruhe Institute of Technology. Demand for such specialists is limited — but where they are needed, they need high-profile professionals.

Gazeta.ru: The respected science journal Nature recently published an article criticizing the ITER project for missed deadlines and overspending. How justified are the accusations?

A.L.: There is nothing new about this. The exact same thing happened with the Large Hadron Collider. Take the National Ignition Facility inertial confinement fusion in Los Alamos, for example. The amount spent on the design and launch of the device exceeded the planned costs by something like five times. And it took twice as long to build it.

It’s the same with ITER. There are a lot of issues, challenging scientific problems. But when they were creating a nuclear bomb, there were also a lot of seemingly insoluble problems. Landing a man on the Moon was also very challenging, and spending was enormous, but the United States finally did it. If the world’s leading players - the U.S., Europe, and Japan - abandon their military programs and channel the money into ITER, the program would be running like clockwork in a mere five years.

But financing is limited. And in most cases this is the decisive factor. Physicists are often accused of slapdash work, of failing to make provisions for this or that. But this is science we are talking about, nature; there will always be hidden riffs and pitfalls. You can only be right 100 percent of the time if you do nothing. But no society - including Russia - can continue without scientific progress.

The interview is abridged and first published in Russian in Gazeta.ru .