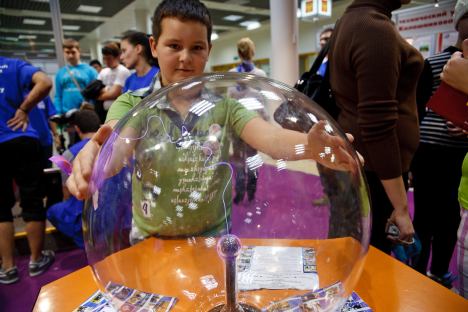 The Science Festival’s traditional motto – "Touch Science" – spoke for itself. Visitors had the chance to fully participate in the festival activities. Source: Ruslan Sukhushin / Press Photo

The Seventh All-Russia Science Festival was held in Moscow on Oct. 12–14. Leading universities and research centers set up 1,000 exhibition stands showcasing their achievements.

The main events took place at the Fundamental Library and Shuvalov Campus of Moscow State University, as well as the city’s Expocenter.

This year’s All-Russia Science Festival in Moscow was attended by a number of distinguished guests from abroad, including the 1997 Nobel laureate in physics, professor Claude Cohen-Tannoudji, and George Fitzgerald Smoot III, who won the prize in 2006. The program was jam-packed with interesting lectures and master classes.

One of the highlights was an easy-to-follow presentation led by several Russian scientists on the discovery of the Higgs boson – an entirely new elementary particle. The speakers provided the audience with basic information on the particle, elaborating on its significance and sharing their opinions about the likelihood of new fundamental discoveries to be made at the Large Hadron Collider in Switzerland.

Anatoly Sagalevich, director of the Deepwater Submersibles Laboratory at the Russian Academy of Sciences’ Shirshov Institute of Oceanology and a pilot of Mir deep submergence vehicles, spoke about a unique dive in the deepest place on the planet – the Mariana Trench. Sagalevich, who has been awarded the order of Hero of Russia, also discussed descents to the bottom of the North Pole and the filming of “Titanic,” among other things.

The festival brought together representatives of various research and engineering teams, institutes, museums and universities. The South Ural State University held a demonstration of unmanned multirotors, drones and robots. A shining star among the latter was the NAO droid: it could hear, talk and recognize people and objects. 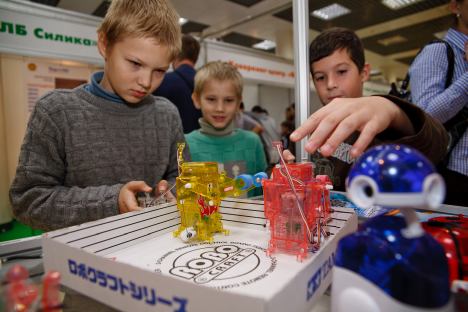 A group of young engineers from Volgodonsk, in collaboration with the Moscow Engineering Physics Institute, presented a whole squad of nuclear emergency response robots.

There was a conspicuous absence of “Do not touch” signs at the festival. Visitors could not only touch the exhibits, but also try to create things for themselves. 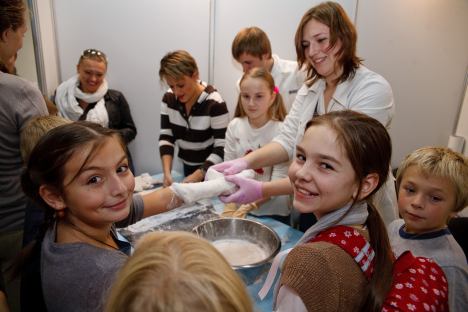 The Psychophysics Laboratory guided its visitors through the stem cell formation process and demonstrated the inner workings of neurons in the brain of a mouse that scientists had rendered transparent.

A small stand of the Polytechnical Museum offered festival-goers the chance to conduct a chemistry experiment and even try their hand at designing a Mars rover vehicle. 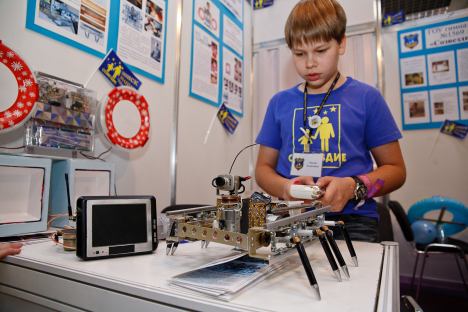 The venue in front of the Moscow State University’s Fundamental Library was host to a dome cinema with a 50-foot internal diameter, which served as an ideal panoramic screen for showing a new generation of popular science documentaries. Modern computer graphics, stunning visual effects and fascinating music turned stories of the Big Bang, the origin of life, evolution and natural selection into an unforgettable show.

According to the co-chair of the festival and rector of Moscow State University, Viktor Sadovnichy, the event was intended to provide its visitors with the opportunity to learn about recent scientific advances, both on a global scale and within Russia.

It was also to give them first-hand insight into the developments at the forefront of scientific research. The festival’s traditional motto – Touch Science – spoke for itself. Visitors had the chance to fully participate in the festival activities. 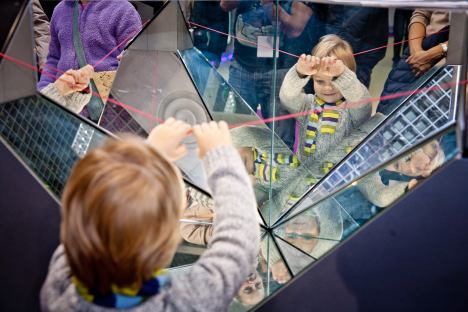 Sadovnichy also noted the growing support for the festival on the part of Russian enterprises from various business sectors. He attributed the phenomenon to the increasing awareness of the festival’s significance for the future of science and for the country as a whole.

“The main objective of the festival is to do away with the dull academicism of science, to prove that research and experiments can be entertaining and even fun,” said Alexey Tarasenko, general director of this year’s festival partner, Envision Group.

“Most events target younger audiences – school and university students. But they will be of interest to anyone. Recent scientific discoveries and achievements should be communicated to the public at large, and raising awareness is a mission that makes us very happy,” he added.

The article is based on the materials from Rossiyaskaya Gazeta and RBC Daily.