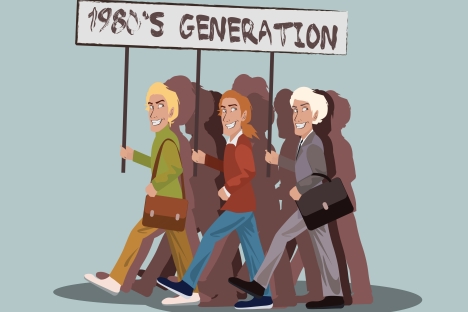 The last generation to be born in the Soviet era ‒ the baby boomers of the 1980s ‒ has become the second largest demographic in Russia. Now reaching the peak of their personal and professional careers, like the analogous generation from the 1960s in the United States, they have gained much force and appear capable of causing unbelievable change. 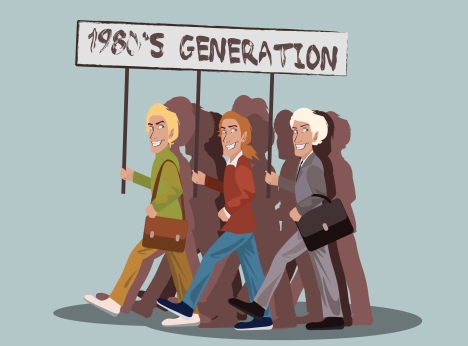 Drawing by Alena Repkina. Click to enlarge the image.

According to federal statistics agency Rosstat, the largest age group in Russia today, with more than 13 million representatives, is of those who are 70 and older. The second largest group in 2010, when the last census was taken, was of people between the ages of 25 and 29 (about 12 million). That would make them 27–31 today.

The latter age group is not just big in numbers; this demographic is also exceptionally active within society. They are the ones who are earning money, having kids, paying taxes, taking out mortgages and going to political demonstrations. They are the people whom advertising agencies target.

The members of this generation are managing newspapers and running advertising companies, publishing books, setting up charities, hosting TV shows, teaching in universities and trying to run businesses.

It is hardly surprising, then, that for many of them, 30 is the peak age for professional activity. Even so, it never ceases to amaze that there are so many in this age group and that they are so influential.

Just think of the protests last winter – they were mostly attended by young people of ages 25–30. Think about the swell of voters at the polling stations, or the people on LiveJournal and Facebook.

Where did they all come from? The baby boom of the 1980s was, in part, an echo of the post-war increase in birth rates and a change in demographic politics.

To put it differently, this demographic consists of people who are all children of the 1981 Resolution of the Communist Party on Measures to Increase Government Support for Families with Children. This was when the government began paying Child Benefits to citizens for their first child and introduced paid maternity leave with guaranteed return-to-work conditions.

This is the last Soviet generation. They have no illusions about the Soviet Union: they remember the bread queues and ration coupons for pasta. They were still infants when the White House was stormed, and, unlike their brothers and sisters born in the 1970s, their hopes were not shattered or disillusioned by the 1990s.

This generation took university entrance exams in the early 2000s. As a teacher at Moscow State University said, “this is the first entering class that grew up on Walt Disney cartoons.”

It was true – they were the first generation of kids who shot home after school to watch Huey, Dewey and Louie, or “Talespin.”

Maybe it was that very childish belief, that the good guys always win and friendship is worth more than money, which kept them from being lured into other temptations.

The gravy train of cash in the early 2000s somehow passed this generation by, so they were never forced to agonize between “being yourself” or “driving around in a Porsche,” or whether to marry for love or money.

Russian baby boomers originally found their self-expression solely through consumerism – and once they had gorged themselves, they started looking around and wondering: So where do my taxes go? How come there is such a long wait at the medical center? What can I do to make things better?

Around 2008, baby boomers began having kids. From 2007 to 2011, birth rates shot up by 20 percent, prompting the Ministry of Health to report that it was all due to the great work they themselves had done, forgetting to mention that this baby boom was the result of the previous one.

But this is where all the social protest began – protests of pregnant women around the Ministry of Education wanting their maternity benefits recalculated, protests of parents whose kids could not find places in nursery school, and collections of signatures protesting the withdrawal of fortified food. Was it really true that everyone managed to get nursery places before? They need it more than others? Yes, this generation really needed them more than others.

Careers and success in life – in the way that their parents understood them – are things to which baby boomers have a different approach. Success means self-expression. Career means that something depends on you.

This leads them to protests, volunteering and charity projects. These processes have gained such a high profile, mainly because of the fact that the people involved in these projects are all the same age and are linked through social networks.

The same thing has happened with Russian baby boomers, as it did with the American baby boomers of the 1960s: an aesthetic reappraisal of the priorities of the previous generation, through shifts in culture and art, was transformed into a battle for social rights, rights for homosexuals, for women, for the disabled and for African Americans.

Where does this all lead? In a few years, the people who are now between the ages of 27 and 31 will become the most populous age group in Russia. If they can unite with the group that is currently between the ages of 22 and 26, then it will constitute a massive force that is capable of effecting unbelievable change.

The opinion is abridged and first published in Russian in RIA Novosti. Alexandra Shevelyeva is a columnist for RIA Novosti.