USRF may pick up where USAID left off in Russia 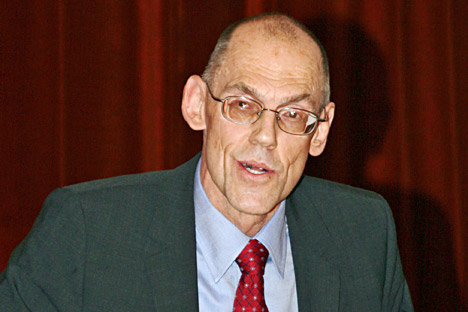 The activities of the previously little-known U.S. Russia Foundation are suddenly at the center of a scandal. From the disclosed correspondence of USRF employees, it has become known that the U.S. State Department seeks to continue influencing internal Russian policy ‒ but not publicly.

In mid-November, copies of e-mails to and from employees at the U.S. Russia Foundation for Economic Advancement and the Rule of Law (USRF) turned up in the Internet. The correspondence between USRF employees and various government and quasi-government organizations in the United States was posted by hackers.

After several days of silence, USRF President Mark Pomar admitted that the correspondence was genuine. However, he denied all claims that his foundation was interfering in Russian policy or Russia’s legal system.

The hacked USRF letters mainly concerned the fate of $150 million that had remained unused following the hasty closing of The U.S. Russia Investment Fund (TUSRIF) in Russia. This fund was run by the U.S. Agency for International Development (USAID), which distributed grants through it. USAID recently shut down its operations in Russia.

The Russian side initiated USAID’s closing: people in Moscow believed that the agency was trying through its distribution of grants to influence political processes in the Russia, including elections at various levels. Washington has categorically denied these claims.

The USRF correspondence, which spans several months in 2011-2012, also discusses a possible secret change of profile. Officially, USRF supports Russian non-commercial organizations (NCOs) that are of no interest to the U.S. State Department. The activities of these NCOs are “oriented towards economic and legal development, as well as support for enterprise” â€’ no politics. However, if USRF increases its work in the political realm, it will receive the balance of TUSRIF’s unspent money or part of it.

Sergei Borisov, head of the board of trustees for “Opora Rossii” (a public Russian organization for small and medium businesses) and a member of USRF’s board of directors, denied the claims about the politicization of the U.S. Russia Foundation.

“USRF is the virtual successor of the U.S. Russia Investment Fund. It promotes the development of enterprise, investment development; it gives out grants for the study of commercialization. A second component is training work in the court system, the system of arbitration courts,” said Borisov. “USRF has no influence on or connection with odious human rights organizations.”

As for the details of the disclosed correspondence and its references to various profoundly political aspects, Borisov said that, that was only “emotions about events on Bolotnaya and the growth of the middle class in Russia.” The protest events on Bolotnaya Square in the center of Moscow took place in December 2011 and January 2012.

“At the time, everything was seething; everyone was commenting on what was going on,” Borisov said, adding that he categorically condemned the hacking of USRF e-mail accounts and considered that a cause for USRF to file suit.

Meanwhile, Russian experts doubt that USRF is not trying to influence politics. In their opinion, the plot is connected to legal and ideological matters, as well as with the struggle of “powerful clans” in the United States.

Political scientist Sergei Markov, a member of the Russian Public Chamber and rector of the Plekhanov Russian University of Economics, stated that, “the United States, in principle, cannot try to influence other countries, since it is a very ideologically-driven country with a missionary complex.”

In Markov’s opinion, various “powerful clans” are lobbying for such influence â€’ not the current U.S. administration led by Barack Obama.

“The USRF may perfectly well become an agent of influence," said Deputy director of the Center for Political Environment, Aleksei Zudin. "After the closing of USAID in Russia, the United States clearly stated that it would not abandon its efforts and would search for other ways of influencing the situation inside the country. In general, influence on the humanitarian sphere in other countries has long been a component of U.S. foreign policy â€’ and that’s no secret. We have every reason to take seriously their statement to the effect that other channels will be found.”

Aleksei Mukhin, general director of the Center for Political Information, in turn, explained why financial flows into Russia are kept in the shadows. In Mukhin’s opinion, this is most profitable to the sponsors themselves â€’ they are hiding not from the Russian government, but from their own government.”

“In the United States, it’s absolutely impossible to understand what is a shadow structure and what isn’t,” said Zudin. “They know all about legal concealment. It is entirely possible that their foundations abroad work in the shadows so as not to violate their own laws [at home].”

The article is abridged and first published in Russian in Vzglyad newspaper.