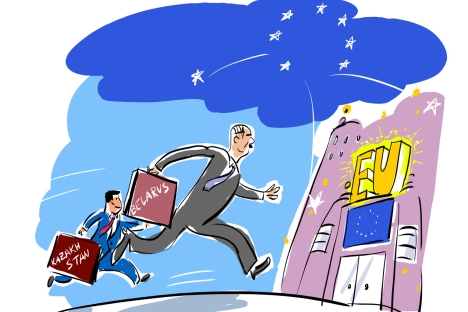 The heated debates in Britain around the country’s contribution to the EU budget are seen from a different angle in Russia. Before the current crisis, and especially in the last years of the Soviet Union the European Union (formerly known as the European Community) had a very positive image in all the lands to the east of Poland. 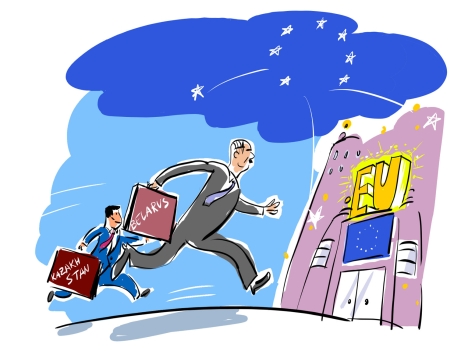 For decades, talks about “European choice” were an important tool used by the pro-western intellectuals and the liberal media to lure Ukraine, Moldova and other post-Soviet states (including Russia) away from the much-maligned and in fact rather mythical “Moscow’s control.” (This control was supposed to be embodied by the Soviet state until 1991 and by the perpetually demonised “Kremlin” later on.)

Now it becomes clear that this black-and-white vision of Europe and “European spirit” is in fact simplified and misleading. “By their fruits ye shall know them,” says the Bible. If the tree of the European Union is so good, how could it bring forth such fruit?

The latest events inside the EU, including the debt crisis in Greece and several other European countries, has made people question old Euro-centric assumptions.

For example, Fyodor Lukyanov, editor-in-chief of Russia in Global Affairs magazine and a commentator for the Voice of Russia radio station, came up with a blunt question: Does the “European choice” still exist for the post-Soviet countries? And is the much-publicised “European integration” still as positive a phenomenon for, say, Ukraine or Moldova as it was for Germany and France in the 50's or, indeed, for Spain and Portugal in the 70's?

Let’s take the example of Spain and Portugal. The participants in a recent Iberian-American summit, held several days ago in the Spanish city of Cadiz, came to a stunning conclusion: Modern EU member states, and Spain in particular, probably need the BRICS countries (Brazil and Russia in the first place) probably even more than BRICS needs Europe.

This conclusion was based on statistics announced at the summit, which was attended by 18 Latin American countries, Spain, Portugal and Andorra. Despite the fact that Spain is the second largest investor in Latin American economies, it was the Spaniards who asked Latin America for help, and not vice versa.

The Spanish daily El Pais provided some statistics in that regard: Spain, with its rampant unemployment and looming debt payments, can only be jealous of the trends in Latin American countries, where the number of people living below the poverty level has shrunk from 50 to 30 percent over the past decade and more than 50 percent of the population is now middle class.

While the Spanish and Portuguese economies show all signs of recession, the “big  20” of Latin America are expected to grow on average by 3.2 percent this year and optimists believe growth could be as high as 4 percent. No wonder that Latin American presidents show a remarkable level of independence and sometimes even a condescending attitude to Spain and Portugal.

This applies not just to the presidents of Cuba and Venezuela, Raul Castro and Hugo Chavez, who are not in the habit of coming to Iberian-American summits.

This time the same is true about the president of Argentina, Cristina Fernández de Kirchner, who did not attend the summit in Cadiz because her doctors advised her not to overburden herself with transatlantic flights. So, she preferred the summits of  Mercosur and Unasur – the Latin American variants of the “Eurasian Union” that the Russian president Vladimir Putin is trying to set up with the countries surrounding Russia.

At the Cadiz summit, the Spanish hosts and their Portuguese friends did not lecture their former colonies on freedom, democracy and elections. It is high time for the other countries of the EU to adopt the same attitude to their eastern neighbours – Belarus, Ukraine and Russia. After all, Belarus, for example, has no less reason to shrug off the criticism of its former European master, Poland, than Brazil has to shrug off any sign of a condescending attitude from Portugal, its Iberian “mother country.”

And these words can be supported by figures. Numerically, Portugal and Belarus have roughly the same populations (about 10 million). Both countries faced a financial crisis in 2011. But Belarus devalued its currency, took a loan of less than $3 billion from Russia and managed to come through the crisis largely unscathed.

Portugal, where people had been buying apartments on borrowed money for decades, got a $97 billion rescue package from the EU and the International Monetary Fund (IMF) and is now asking for more. The reason is simple: Having surrendered its financial independence to the eurozone, Portugal cannot now devalue its currency, the euro. It can only borrow more money.

Is this the “European choice” we were told so much about? Then we don’t need this choice. And we won’t tolerate any more lecturing. In the 90's, when Russia had a debt problem with the EU countries, who banded together in the London Club of creditors, there were some grounds for this kind of lecturing approach.

But the EU made its choice: It did not make any gifts to Russia, it did not write off a single penny when Russia in fact abandoned its empire for the sake of those largely mythical “European values”. Now Russia is crediting some EU member states (including Cyprus, Ireland and some other insolvent “professors of democracy”). So, why should we be accepting condescending attitudes towards ourselves?

The irony of history may set things right. And the multiethnic, impatient and pioneering “extensions” of Europe (formerly the US, now Latin America, Russia and the Eurasian mass of countries) can become better adapted to survival in the modern world – better certainly than the ageing, unapologetic and ultimately arrogant Old World.