Beatings and shakedowns spark a rebellion against jailers 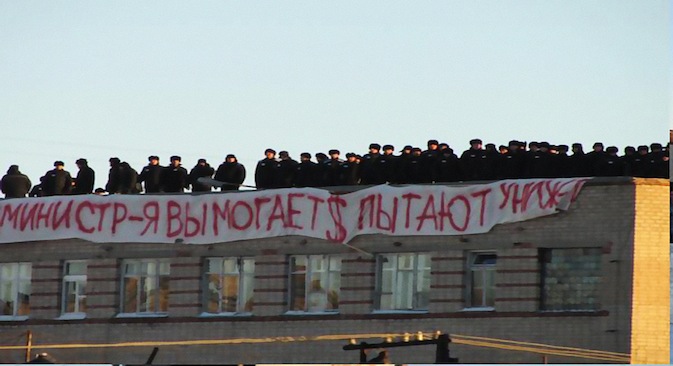 Over 200 convicts gathered on the rooftop of a penal colony in the Southern Urals to express their frustration about the conditions in the jail. Source: AFP / East News

A recent disturbance at a penal colony exposes rampant corruption and abuse against convicts, which human rights officers say is not uncommon in Russia’s prisons.

On Nov. 24, over 200 convicts barricaded themselves on the rooftop of a penal colony in the Southern Urals, putting up giant banners that read “Help, people,” “There’re 1,500 of us here,” and “The administration extorts $, tortures and humiliates [us].”

These messages were addressed to several hundred people that had flocked to the colony on the “visit day” but were shut out by the jailers after 500 inmates went on hunger strike.

The first reports of a riot at a colony in the town of Kopeysk (Chelyabinsk Region) came in early on Nov. 24. Chelyabinsk commissioner for human rights, Alexei Sevastyanov, wrote in his blog that several hundred prisoners went on hunger strike and demanded to see an inmate whom they claimed had been beaten and placed in a punishment ward the day before.

Behind the scene of Russia's prison

Number of Russians viewing authorities as corrupt continues to grow

The colony was closed to visitors and cordoned off by riot police. Lenta.ru reported that 38 people out of the several hundred gathered outside the colony were arrested during clashes with riot police trying to clear the area.

Oksana Trufanova, coordinator of the Gulagu.net (“No more Gulags”) movement in the Chelyabinsk region and staff member of the Russian Verdict human rights center, told Dozhd TV that she was hit on the head with a truncheon by riot police dispersing the crowd in front of the colony’s gate.

“OMON (riot police) rushed toward a crowd of people that were just talking to each other,” she said. “I tried to run away but was hit with a truncheon and fell on the ground.”

In a statement posted on its website, the Chelyabinsk penitentiary service denied reports of “special task police force of the Chelyabinsk region using force against citizens,” noting at the same time that eight members of a riot police squad were injured during an operation against violators of public order.

Trufanova was one of the first human rights activists allowed to enter the colony last weekend.

In an interview with Ekho Moskvy radio, Trufanova said the colony’s administration refused to let her in the punishment ward and would not present convicts that had allegedly been beaten. She cited the jailers as saying that the convicts would attempt to injure themselves in front of her.

Later that night, riot police stormed the facility occupied by convicts, Gazeta.ru reported. On the morning of Nov. 26, local penitentiary authorities stated that “the situation in penal colony #6 is stable and under the administration’s control” and that “no force was used against inmates.”

Commissioners for human rights, however, were denied entry into the colony until Nov. 27.

Viktor Nemchenkov, advisor to the Russian commissioner for prisoners’ rights, inspected the colony this week and said at a press conference on Nov. 30 that almost every one of the 200 inmates of the Kopeysk colony he talked to during his visit admitted they were beaten by jailers.

Inmates also confessed to him that the colony’s administration extorted money from convicts’ families. Nemchenkov was told that parole, for example, would cost a convict or his family around 50,000 rubles ($1600).

Lukin’s commission collected evidence on site and submitted it to the Chelyabinsk prosecutor’s office.

“We gave them the details of accounts to which convicts’ families transferred money, but the prosecutor stated this information could not be confirmed in a probe,” said Lukin.

Dina Latynova, member of the Public Commission for Prisoners’ Rights, told Kommersant that the commission frequently reports about torture in the Kopeysk colony.

“Convicts say they are tied to the bars with scotch tape for a few hours; many spend years in the punishment ward,” she said. “We reported it to the penitentiary authorities, but they ignored that.”

A major problem that causes disturbances in prisons, Bazunov said, is the use of cheap labor. Human rights officers that recently returned from Kopeysk said local convicts working as tailors there received less than a dollar per month.

“Medical staff at prisons, for example, are accountable to penitentiary authorities, and so are local supervision authorities. Can you expect them to be unbiased?” he said. According to Bazunov, human rights officers put forward a motion to set up independent medical and supervision services, but the Justice Ministry turned it down as “inexpedient.”

The article is based on materials from Gazeta.ru, Lenta.ru, Kommersant, Ekho Moskvy, Dozhd TV, Chelyabinsk Directorate of the Federal Penitentiary Service, Live Journal page of the Chelyabinsk commissioner for human rights.