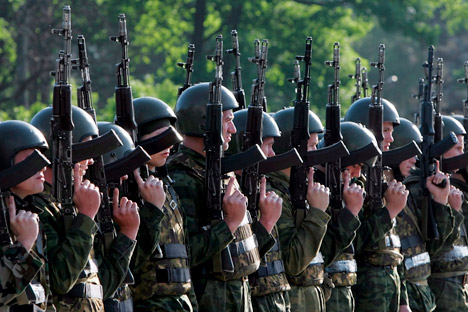 New special forces will save fellow citizens outside of Russia and fight terrorism.

The Joint Chiefs and the Foreign Military Intelligence Directorate (GRU) have asked Russian Minister of Defense Sergei Shoigu to quickly deal with the question of the necessity of creating a Special Operations Command (KSO) in Russia. A highly placed source in the Defense Ministry told Izvestia that the developers of the project for this command are in the process of obtaining a meeting with Shoigu.

“In October of this year, the project was presented by representatives of the Joint [Chiefs of] Staff and GRU to then Defense Minister Anatoly Serdyukov for his consideration,” the source said, “but he rejected it, without explanation, as ‘not expedient.’”

According to the project, the KSO will consist of the following: a Defense Ministry special-purpose center called Senezh, which will answer directly to the minister; a SWAT team from one of the military districts; a helicopter squadron from the Center for Deployment and Retraining of Military Pilots (TsBP) at the Torzhok Air Base; and a squadron of transport Il-76s from the Migalovo airfield near Tver.

“The task of creating such a center was assigned back in 2008,” the source told Izvestia.

The KSO will be charged with carrying out emergency missions, such as freeing hostages on enemy territory, evacuating citizens from local conflict zones, and liquidating band formations. In a large-scale war, these commandos would be the ones to take out the enemy leadership, strategic sites, communication hubs, launch facilities for nuclear missiles, etc.

In developing the structure of this command, the Joint Chiefs were guided by the experience of France, Great Britain and Germany; in creating certain tactical elements, they utilized the experience of the United States. These missions will be carried out mainly by the Senezh unit, while the SWAT and aviation teams will focus on auxiliary functions involving fire cover, transport and the landing of airborne troops.

According to the Defense Ministry source, the KSO already exists in essence. At Torzhok, helicopter pilots have spent four years jointly training with Senezh for all aspects of combat. The transport planes have spent roughly as many years flying SWAT teams to missions.

“The army SWAT team is the one remaining question mark. It will be either a team from Tambov or one of two teams from the Southern Military District. The Tambov team is closer, but the ‘southerners’ have more combat experience. They are all fully staffed, they have subunits for chemical defense, combat engineers, communications, the rear,” said the source.

“Bringing all these units together in a unified center will make for better coordinated actions and better priorities in combat training. Today, pilots who have flown with Senezh of their own free will are not assigned to other missions. When we have a unified command, crews will focus on SWAT teams as a matter of course,” the Defense Ministry source said.

He noted that paratroopers support the main unit in Germany and France, while Great Britain has a Special Forces Support Group. Helicopter and transport squadrons constantly train and fight together with ground units, so as to work out their combat coordination down to the last detail.

Although the Joint Chiefs were displeased by Serdyukov’s rejection of this project, the SWAT team itself agreed with the former minister and said that the KSO should include all army SWAT teams, rather than separate units and subunits.

“In addition to Senezh, we have seven land SWAT teams, four reconnaissance sea teams, special VDV regiments, psychological operations forces, and other special units. What should we do with them? Some will be left under the general military command, some will not. In Great Britain and France, the KSO includes all special-purpose units,” the source said.

Anatoly Matveichuk, who holds a doctorate in military sciences, supports the intentions of the Joint Chiefs of Staff.

“Commandos carry out not only military but also political and economic missions. This should be an entirely independent structure. To make all available special units subordinate to this structure is not necessary; they can be introduced gradually, as they gain experience,” said Matveichuk.

In his opinion, the KSO should answer directly to the supreme commander-in-chief, not to the minister of defense or the chiefs of staff.