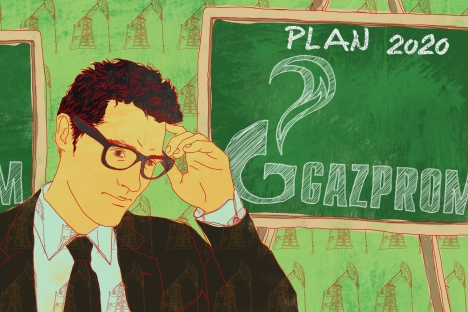 Despite its monopoly on the world's gas market, Gazprom may face tough competition in the near future. The development of shale gas may be a serious challenge for Russia's leading energy company.

{***Gazprom needs to adapt, and fast by Mikhail Korchemkin***}

Read Ian Pryde's opinion on the next page

Gazprom needs to adapt, and fast

A few years ago, Gazprom regarded the United States as one of the main consumers of Russian natural gas. By 2015, the Russian gas monopoly had planned to increase its share in the U.S. natural gas market to 10 percent.

However, the shale gas revolution thwarted its plans. The U.S. doubled its annual shale gas output in 2007 and 2008, even though import prices were quite reasonable, at $243 and $307 per 1,000 cubic meters, respectively. During most of 2009, the import price remained below $130, but shale gas production continued to grow.

U.S. imports of liquefied natural gas (LNG) not only failed to double over the past five years as had been predicted, but fell dramatically, with imports in the first eight months of 2012 less than one-fifth of the volumes half a decade earlier. Thanks to shale gas, the tables have been turned: The U.S. has changed from a major gas importer into a potential exporter.

Russia’s president, Vladimir Putin, in October warned that the development of shale gas production solutions “could seriously restructure the global market for hydrocarbons.”

Yet Gazprom CEO Alexei Miller still speaks about the shale gas revolution as if it were a futuristic Hollywood movie, commenting recently that Gazprom didn’t consider shale to be a promising business.

The truth is that the global gas market is now unfavourable for Gazprom. Because of reduced U.S. demand for natural gas, the LNG traditionally supplied from Trinidad, Nigeria and other countries is being rerouted to the spot markets of Europe and Asia, resulting inlower prices. Gazprom’s competitors have renegotiated and cut their prices faster, grabbing market share, and it currently faces huge political pressure and lawsuits. The answer is to meet its customers halfway in price negotiations.

The shale revolution also hits Gazprom’s prospects of supplying gas to China by pipeline. China plans to increase its shale gas output to 80 billion cubic metres per year by 2020. Given annual supplies of 55 billion cubic metres of natural gas from Central Asia, Russia will have no gas future in China, at least until Gazprom offers Beijing a competitive fee.

Gazprom still believes that, despite the global shale gas bonanza, its position in the world market will remain unshaken.

“The current shale gas output volumes won’t be enough to change the situation in the European gas market because of the cuts in the production of traditional natural gas,” Gazprom said in its report for the third quarter of 2012. “In the medium term, Gazprom’s natural gas supplies to its traditional markets will remain competitive.”

Yet the global figures tell a different story. If shale gas production costs remain at the average U.S. level of $4 to $5 per MMBtu, then shale gas will be as competitive in some regions as pipeline gas delivered by Gazprom.

Does Gazprom have real shale gas production prospects of its own? I don’t think so. Instead it should focus on keeping its (falling) share in the major gas markets – in Russia, the former Soviet Union and Europe.

Shale gas may be attractive for independent Russian producers, including Novatek, Itera and smaller companies working in the regions that have no access to network gas. They will be able to work in local markets, offering fees below those charged by Gazprom. The Kremlin has promised that domestic gas supplies will eventually be as profitable as exports, so shale gas could ultimately displace Gazprom’s pipelines.

So the challenge for Gazprom is clear: Become more competitive, or face being eclipsed by its competitors.

Most observers agree that after making generous promises during the presidential election campaign, Vladimir Putin has finally realized that Gazprom is no longer the state’s cash cow. In October, he warned that the development of shale gas “could seriously restructure the global market for hydrocarbons,” although experts argued it was a game changer long before.

The same observers see all the moves to create a huge energy conglomerate at Rosneft in recent months as Putin’s attempt to shore up the budget to keep his election promises.

The problem is not only that Russia still seems totally wedded to the failed Soviet methods of state-run gigantism, but has simply shifted all its eggs from one basket to another and will remain just as exposed as before to the vagaries of global energy prices.

In this sense, the economy’s structure has hardly changed since the Soviet era, when oil propped up the budget, but the country had to import grain periodically from the likes of the United States, Argentina and Australia to make up for failed harvests due to bad weather and its chronically inefficient agricultural sector.

Before and after the Asia-Pacific Economic Cooperation (APEC) summit in Vladivostok in early September, Prime Minister Dmitry Medvedev and Oleg Deripaska, one of Russia’s richest oligarchs, wrote virtually identical articles in the Financial Times about Russia’s need to “pivot to Asia,” which involves developing Russia’s sparsely populated, poorly developed and often inhospitable Far East Region in order to supply Asia with the resources it needs, especially oil, gas, metals and electricity.

Russia, however, has been here before - the Kremlin was convinced that the commodity boom would last until 2014, despite warnings to the contrary from numerous experts, including even Jim O’Neill, the inventor of the much vaunted BRIC acronym. Once again, the approach is typically Soviet-cum-Russian – grandiose medium and long-term plans and projects that do little to ease pressing problems now.

And once again, there are significant risks. The BRIC countries, three of which are in Asia, are all experiencing significant slowdowns following their unbridled optimism in 2000-2008.

Then there’s energy – the threat to Russia is not just from shale gas and oil. As energy expert Daniel Yergin asks, if global GDP jumps from some $70 trillion now to $130 trillion in just two decades and the number of cars doubles from 1 billion in 2011 to 2 billion, mostly in Asia, will fuel resources be sufficient? If not, Russia will of course benefit enormously.

But the future is unknowable, and another disruptive technology – or technologies – could change the equation fundamentally.

Given its educational level and intellectual history – the Soviet Union produced 27 Nobel Prize winners in economics and science – Russia should be doing much better in diversifying its economy, but as in the Soviet period, modern Russia is finding it astonishingly difficult to move up the value chain. As Ruchir Sharma, head of Emerging Market Equities and Global Macro at the investment bank Morgan Stanley, has pointed out, the Moscow stock exchange lists not even one large global manufacturing company, while none of the top 5 global vodka brands is Russian!

Ultimately, Russia’s problems come down to politics. There are no rich countries of any size that are not democratic.

As Sharma noted, “Russia needs not only a new non-oil economic model. It needs a new non-tsarist mindset.” That means fundamental economic and political reforms – and development of the rule of law and trust in society both between state and people and between the people themselves.

A modest start might have been made. Recently, Russia finally passed a law to allow people to register businesses at home – just 21 years after the collapse of the Soviet Union!