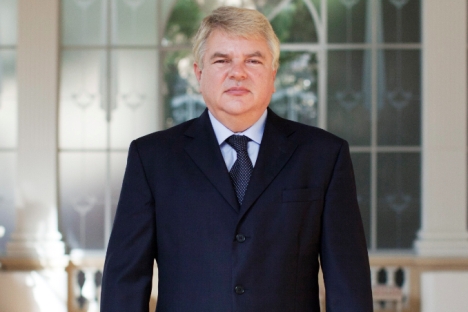 Russia’s representative to the UN Food and Agriculture Organization (FAO): "The FAO assessment of the food situation in Russia is that it is stable. We are at the level of developed counties in this regard." Source: Michele Palazzi

The food situation in Russia is stable despite a series of the natural disasters in 2012. According to Russia’s permanent representative to the Food and Agriculture Organization of the United Nations Aleksei Meshkov, Russia has reached the level of developed counties in this regard.

Russia’s permanent representative to the Food and Agriculture Organization of the United Nations (FAO) and the U.N. World Food Program (WFP),  Aleksei Meshkov, told RBTH about the global food situation in the aftermath of the natural disasters of 2012.

RBTH: You are Russia’s first permanent representative to FAO and part-time envoy to the U.N. WFP. Has the FAO reform been successful?

Aleksei Meshkov: The reform started under the watch of Senegal’s Jacques Diouf, who led the FAO for 18 years, and has continued under the leadership of its current director general, José Graziano da Silva from Brazil. The focus is on the decentralization of operations and on moving them “into the field.” We totally support this ideology and are working toward this goal.

RBTH: What is FAO’s assessment of the world’s food situation? Have this year’s natural disasters really hurt the grain and meat markets badly?

A.M.: Of course the recent failed crop of maize, soya and grains in major producing countries is creating some pressure. But this is far from comparable to the food crises of several years ago.

There are two reasons for this. First of all, global production of rice has grown substantially. Secondly, there are stockpiles left over from last year’s bumper crop.

The FAO stresses that the situation is difficult but not hopeless. Plus, every effort is being made to prevent us from sliding into crisis. At the same time, speculators in agricultural markets are interested in driving prices up and creating a frenzy. That’s why the market situation should be studied using actual FAO statistics.

A much more transparent market mechanism created over the past few years is helping us make progress toward the goals we set. But over the long term, the tasks are not easy. We have succeeded, of course, in reducing world hunger, but not by much — in part because of the past few crisis-ridden years.

Some 900 million people are reportedly going hungry now. By 2050, the task will be to feed nine billion people, which will require us to double global agricultural output. This is a complex task that, besides agricultural production as such, involves fishing, aquaculture, water and forest resources, and the socio-economic situation.

Russia is a very active player in all of those fields. The FAO assessment of the food situation in Russia is that it is stable. We are at the level of developed counties in this regard.

While Russia is still a net importer of meat, we are firmly on the way to self-sufficiency, primarily in terms of poultry meat. Russia has advanced to become a key player in grain, and this trend persists. The FAO considers Russia one of the main sources of food output growth. I would like to point out that food security is one of the priorities of our program for Russia’s upcoming chairmanship of the G-20 and G-8.

RBTH: Permanent representatives of the BRICS countries (Brazil, Russia, India, China, and South Africa) have been increasingly cooperating in different international organizations recently. Is this the case for the Rome international scene as well?

A.M.: Of course it is. Continuous close interaction among the BRICS countries at the FAO exists at the level of our permanent representations. The election of Mr. José Graziano da Silva as FAO Director General is a shining example of this coordination. There were two candidates for the post, but the BRICS representative won the secret ballot by a two-vote margin.