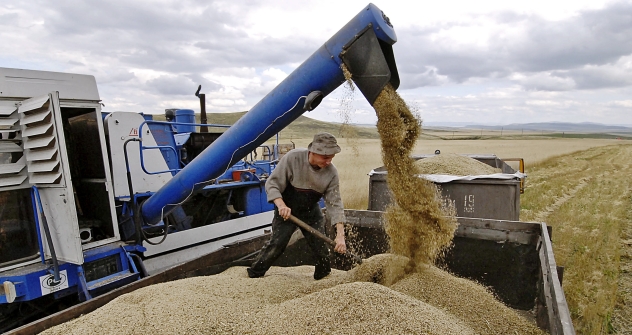 The grain in the marketplace is barely enough to cover supply, which makes traders hypersensitive to a bad harvest, experts argue. Source: ITAR-TASS

Another food crisis is upon us: the U.N.’s Food and Agriculture Organization expects the worldwide grain harvest to fall 52 million tons short of target this year.

As part of that trend, Russia will harvest 70 million to 75 million tons of grain this year, down from 94 million, according to the country’s Agriculture Ministry. Projections by the U.S.

Department of Agriculture and the International Grains Council, which also keep tabs on Russia, one of the world’s biggest grain exporters, are in the same ballpark.

The United States, an even larger supplier not only of wheat but also corn, has this year been suffering from its worst drought since 1988. The USDA expects a 12 percent drop in the U.S. corn crop to about 13 billion bushels.

Just a few years ago, grain was so abundant that farmers did not know what to do with it. Most grain growers not only from Russian but also American breadbasket regions have seen drought destroy their crops. Left without the two key global suppliers of grain, the markets responded with price hikes that almost matched record highs set in 2008.

Climate change has been forcing everybody to work in unusual weather conditions.  Several times in the last few years, farmers’ fields in European Russia did not see the first snowfall until close to Christmas, even though it usually comes in the first half of November.

It was only in 2009, that farmers in Russia’s Altai Territory, Siberia’s breadbasket, threatened to burn their fields because of low prices. Before that, German farmers used grain as fuel to heat their homes because it was cheaper than oil.

Back then, a ton of Class 3 wheat sold for about $125, which did not even cover production costs. Prices are now double that. Class 4 wheat (inferior in quality to Class 3) sold for more than $270 in early September, just short of the 2008 record.

Even these steep price increases, however, have not helped farmers much. Crop failures mean grain is more expensive but also that there is less of it to sell, said Pavel Skurikhin, chairman of Sakho, Siberia’s biggest agricultural holding company. On the contrary, shrinking crops have raised production costs significantly.

“It’s clear, even now, that the crop will be much smaller than we had hoped for,” Skurikhin said. “At least we are not selling grain at a loss, as we have done on many occasions.”

Russia’s lean years started with the food crisis of 2008 and are continuing into their fifth consecutive season. Agricultural producers are mired in debt. Many of them have multiple mortgages.

It is not only the weather that is hurting the sector, either. Insufficient working capital, a direct result of the crisis, has forced many to cut the amount of productive land.

The Altai Territory is among the hardest hit. According to the National Union of Grain Producers, Siberia will harvest around 10 million tons of grain this year, 4.6 million less than last season. Even with last year’s balance transfers and reserves, Siberia will, at best, barely be self-sufficient. Russia’s southern regions are facing similar circumstances.

And what happens in Russia affects farmers worldwide.

“The general global situation affects prices. Even if [Russia and America] are not linked through supplies, major exporters’ problems affect everybody,” said Vladimir Petrichenko, general director of ProZerno, a consultancy.

Russia’s drought may account for a 25 percent hike in U.S. wheat prices, said Dmitry Rylko, general director of the Institute of Agricultural Market Studies. Conversely, the U.S. drought may have caused a 50 percent rise in prices in Russia.

The situation is not nearly as bad as it was during the 2008 food crisis. The United Nations’ Food and Agriculture Organization estimates that global grain reserves now stand at 522 million tons - 100 million tons more than in the 2007–08 marketing year. But the balance is delicate.

“With demand and supply more or less balanced, the market is hypersensitive to any bad news. Demand is growing slowly but production is lagging behind. That’s why tension can be felt on the markets. Hence the rapid price growth,” said Boubaker Ben Belhassen, principal officer of the FAO’s Trade and Markets Division.

Mikhail Orlov, president of the Ambika Group, a Russian agri-food company, said the grain in the  marketplace is barely enough to cover supply, which makes traders hypersensitive to a bad harvest.

“Memories of the Russian embargo on grain exports in 2008, after which U.S. wheat prices shot up from $200 to $300 per ton, are very much alive. That’s why traders are scrambling to get their hands on any available supplies and scooping up reserves,” he said.

When Russian officials confirmed in August that they would not impose an export embargo, prices stabilized.

That’s as well, Orlov said, as price hikes in Middle East countries such as Egypt, which tends to buy from Russia at the last moment, could cause political turmoil.