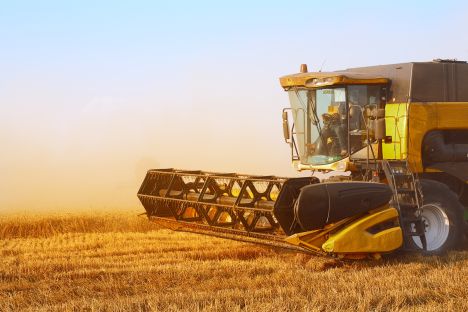 The harvesting campaign is currently under way in the Krasnodar Territory. Source: Lori / Legion Media

Farmers in the Krasnodar Territory are benefiting from global grain prices in a way their Soviet predecessors could never have imagined.

In the Krasnodar Territory, the harvesting campaign leads the evening newscasts. Footage of combine harvesters pouring grain into trucks is familiar to the locals. In another popular shot, the director of a local farm reports to a local official about what is always a hugely successful harvest, but the official always frowns, full of concerns – these are the rules of the genre. Then the regional governor delivers a speech to a full house of rural executives, wearing identical white short-sleeved shirts.

It is as if nothing has changed since the 1980s. But the reality is that the pictures cannot keep up with the times. The Soviet Union used to import wheat, but during the 2011-2012 season, Russia exported 21 million metric tons of the grain. This figure makes the country the world’s second-biggest grain exporter, falling only to the United States, which exported 28.7 million tons. During the Soviet era and still today, the Krasnodar Territory leads the country in terms of yield and harvest volume. In 2011, the region thrashed more than 7 million tons of wheat.

Farmer Valery Kiyashchenko remembers a joke Sberbank CEO German Gref told a joke at the agriculture section of the 2009 International Economic Forum in St Petersburg: there are three ways to go bust – the fastest one is horseracing, the most pleasant one is women, and the surest one is agriculture. Kiyashchenko gets the punchline, but today the joke is on the teller. Investors are sold on Russian agribusiness.

There is a warning by Peter the Great in the office Kuban AgroHolding that reads: “If, from now one, anyone harms agriculture, he must be hanged without any scruples!” The company’s majority shareholder is billionaire Oleg Deripaska, but this is of no importance to one of the company’s harvester operators.

“Deripaska or not, what really matters is the wages they pay,” said the operator, who preferred to remain anonymous. “I can see only benefits – they bought me a new machine. It is far more pleasant to operate a foreign harvester than an old Russian-made one.”

Kuban AgroHolding is a giant, with 84,000 hectares of plowland. There are Kuban signposts in virtually any field in Krasnodar Territory. It is showpiece agribusiness – among other things, it boasts a grain elevator the size of a 12-story building and a new seed center. The Ladozhksy corn seed calibrating plant, which is part of the agroholding, has adopted the Japanese Kaizen quality management system.

According to the Agriculture Ministry of Krasnodar Territory, smaller farms account for almost 1 million hectares of plowland in the region, out of the total of 3.75 million hectares. There is a slew of farms here and no uncultivated plowland at all.

When state farms were parceled out, all the workers received a land share ranging in size from four hectares to 20 hectares. Some owners sold their shares, but most farmers settled down on the land. However, it isn’t always worth the effort to cultivate a tiny plot of land, and 40 percent of local plowland is leased by Kuban. The holding pays for each three to four hectare plot either money or in kind; the in-kind payments amount to around about 1.2 tons of grain, 50 kilograms of sugar and 30 kilograms of vegetable oil a year.

Land is the foundation of capital in Krasnodar, so the local business elite includes those who once bought cheaper land shares and afterwards managed to conclude lucrative lease contracts. Today, land trade has been replaced by lease title transfers.

Show me the money

In front of the Zarechye company headquarters, there are five flags fluttering on five flagpoles. They represent Russia, the Krasnodar Territory, the Krasnye district, the company and Bayer, its chemicals supplier. Beneath the poles lies a marble platform with the motto “Working for the Good of Russia” embossed in both Russian and English. The parking lot near the headquarters is a display of luxury SUVs. The farm machinery yard also features new models of the best brands. “Wheat is traded at $270 on the exchanges now,” said business owner Valery Kiyashchenko as he looked up from his Apple computer. “With the dollar currently trading at 33 rubles, we get almost 9,000 rubles per metric ton, nine rubles per kilo, minus the 2-ruble markup for the traders – and you have the current 7-ruble price. There is no point in selling now – if the dollar appreciates, then wheat prices will automatically go up.” Kiyashchenko, a farmer from the Tikhoretsk district who has 3,500 hectares of plowland and employs 40 workers, is a frequent visitor to farm expos in Europe and the United States.

If it were not for his glasses, Sergei Gorshunov would look like a typical American farmer in his blue jeans, Stetson and his pickup truck. Yet out of his truck, Gorshunov looks more like the schoolteacher he once was. “I am a teacher – I worked in a school for 26 years,”, Gorshunov said. “Back in 1992, my mother-in-law gave me her 3.5-hectare land share as a gift and that land plot set everything in motion.” Today Gorshunov has 200 hectares of his own land and leases another 400 hectares. He employs 10 hired workers.

Igor, Gorshunov’s elder son. is a former military engineer; his brother Maxim is an economist. Both work with their father now. Most of the family’s machinery – two harvesters, eight tractors, three dump trucks and two fire engines – were bought as junk and restored with their own hands. “That harvester over there,” Maxim said, pointing, “we bought for 300,000 rubles ($9,300) and restored it – now it is worth 1.5 million rubles ($46,500).” But they took out a loan to buy a new Challenger tractor, made in the U.S. “We didn’t buy it to show off; it’s just that it has performance four times greater than the Russian T-150,” Maxim said.

Gorshunov is proud of his rich fields. “You see that field? That’s my neighbor’s,” Gorshunov said, pointing at a field of small sunflowers and weeds. “It will never match mine, because I invest in fertilizers, crop-protection agents; I work 24/7.” Gorshunov hired and fired agrotechnologists until he found someone he considered a real professional. Gorshunov’s modern grain elevator and mill, which is still in a state of disrepair, are surrounded by ruins of former state farm properties. “When our troops retreated, they burned everything,” Gorshunov jokes, referring to the difficult time surrounding the transfer of state property into private ownership. Maxim estimates the value of the family business at 60 million rubles ($1.8 million), which does not include the land. In 2011, the farm grossed 2 million rubles ($62,000). The Gorshunovs currently have 110 hectares under wheat. “I get texts with price offers,” Gorshunov said. “They are ready to buy at 7.2 rubles per kilo, but I’m still waiting for the price to rise.”

The lion’s share of Kuban wheat is exported. The Kuban AgroHolding sells 60 percent of its wheat harvest abroad; however, even such a giant company does not work with foreign buyers directly, but via export dealers. Smaller farms cannot work with export traders because of their insignificant volumes, so they mostly sell their harvest to domestic resellers. But the traders work hard to earn their 2 rubles per kilo – exporting wheat involves big problems with access to ports and availability of transport; sometimes the wheat will spend days waiting for transshipments in the port city of Novorossiysk. The other sales option is to work with local millers.

This leaves room for playing with prices. For example, foreigners assess wheat by protein content, whereas Russia assigns wheat grades based on gluten content. There is no clear correlation between these two criteria. The higher the grade (grade 1 is the highest), the more gluten the wheat contains, and the better the bread it makes. This year, some wheat was frozen, but the remaining harvest had a higher gluten quotient, so there is lots of grade 2 wheat. If the owner decides to export it, buyers will only pay for it as grade 3 or 4 wheat, as it is not rich in protein. Even so, domestic millers will pay more for grade 2 wheat, mix it with cheaper grade 5 feed grain and obtain standard flour that is normally made from grade 3 wheat.

Farmers can sell the entire wheat harvest at current prices, or they can opt to sell it without harvesting, at 4-5 rubles a kilo, and buyers will come and harvest it themselves, but most farmers prefer playing the year-round wheat price poker.

The harvesting campaign is currently under way – there is a lot of grain, and those who have nowhere to store it are selling it to traders. In spring, nothing will be left of the harvest, and prices will soar. There could be price hikes throughout the year – there are so many factors involved. Prices are hardly predictable; for farmers who do not have storage facilities, it is too costly to store grain in someone else’s elevator. Even those who have their own storage, there is the risk the grain could go bad or be eaten by mice. The farmer can only decide whether to sell the grain, or wait a bit. The only time they know for sure it is the moment to see is when the harvester breaks down, or it is time to repay a loan. Then a truckload of grain can be had by anyone prepared to pay ready cash.