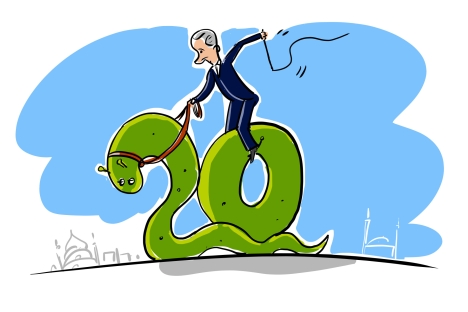 Russia must marshal the talents of all its relevant ministries if it wants to prove that its chairmanship is not simply technical.

The G-20 is not the G-8. It possesses greater legitimacy because of its broader representation of different countries. Russia will need the talents of all its relevant ministries if it wants to prove that its chairmanship is not simply the technical allotment of an arena for meetings.

The G-20 is an annual gathering of heads of state representing the world’s largest economies. It is a product of the panic that gripped the international community in the fall of 2008. In the wake of the Lehman Brothers bankruptcy and the general financial collapse, governments began frantically looking for a way to calm people’s fears, so as not to make the situation worse and to gain time to develop a plan of action.

The first G-20 meeting in November 2008, organized in great haste, proved useful. The very fact that so many leaders of influential states had come together had a pacifying effect on the volatile markets, since it created the impression that together they might solve something.

Later meetings took place against a calmer backdrop, and expectations quietly began to become more moderate. It became clear that this format too, though it had its advantages over others, was not a miracle-working instrument of global management.

The world situation today requires solutions of a scale that exceeds the present resources of politicians. Globalization, having reached a certain level and scope, creates challenges that are too serious and conceptual — challenges in which political and economic components are interwoven — altering the vector of movement in unpredictable ways.

This is not to say that summits like those of the G-20 are pointless; but they can only minimize the risks. Especially since the mechanism for implementing those decisions that the group succeeds in making has not been formalized, and everything hinges on the conscientiousness and good will of participating countries.

Every country always has a list of priorities ready when it assumes the rotating chair of the G-20, naming the issues on which it will focus during the entire year.

Russia is no exception, and officials have already cited the main priorities: strengthening financial stability, reducing government debt, stimulating growth, fighting unemployment. These are all burning issues, so stormy discussions are guaranteed.

True, the experience of previous summits has shown that the most detailed and well-prepared agenda goes right out the window in the event of some terrible crisis.

Thus, both the French and Mexican chairs were forced to discuss one and the same issue: the Greek debt crisis and financial measures for putting out the fire in the eurozone. It may be that the perennial Greek issue will upset the applecart in St. Petersburg as well, although it seems that everyone has come to see Athens as routine, inevitable and not very interesting.

Clearly, in the case of the G-20, the old saying is true: “All animals are equal, but some are more equal than others.” In other words, the main discussants number only three or four. They are the United States, China, the European Union (or, rather, Germany speaking for the EU), and possibly Japan, thanks to the size of its economy.

True, the presence of many countries with different types of economies and political systems gives the discussion additional legitimacy. The G-8 has no such legitimacy since it was created as an exclusive club for the West and, in essence, has remained just that.

Incidentally, the trademark of Russia’s G-20 chairmanship will be the BRICS summit, which is slated to take place in St. Petersburg, on the sidelines of the main event. Although BRICS has yet to become a consolidated center for making decisions about global issues, the specter of such a center continues to trouble countries in the West.

Much depends on the organizational abilities and ambitions of the chairing nation. France, under Nicolas Sarkozy, made titanic efforts to show that it was not simply offering an arena for meetings, but genuinely leading the world process. Even so, it did not entirely succeed in this.

During this year’s chairmanship of the Asia-Pacific Economic Cooperation forum by Russia (the chairmanship entails not only the summit, but a series of meetings and events throughout the year), many people noticed that the relevant Russian ministries showed themselves to be capable organizers of conferences and that these conferences arrived at the necessary consensus.

This is an extremely difficult thing to achieve, since China, for example, has constantly resorted to blocking all manner of decisions. At the G-20 meetings over which Russia will preside, these organizational talents will be every bit as useful.

Fyodor Lukyanov is the editor-in-chief of the journal Russia in Global Affairs, as well as the head of the Council on Foreign and Defense Policy.