The future of the world economy in Russia’s hands 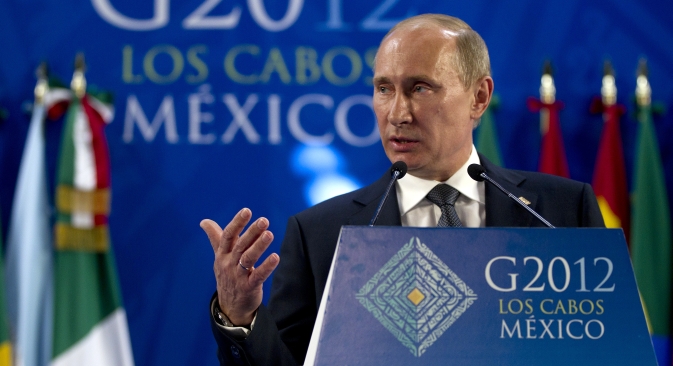 Experts believe that Russia’s presidency of the G20 may enable it to enhance the role of BRICS in the current balance of powers.

From December 1, 2012 until November 30, 2013, Russia will hold the presidency of the G20 — the club of the world’s largest economies. The G20 accounts for 90 percent of the global GDP, 80 percent of world trade and two-thirds of the world’s population.

The G20 Russian sherpa and head of the Russian President’s Expert Directorate, Ksenia Yudayeva, told RBTH that the G20 would be held in St. Petersburg on September 5-6, 2013. Early bilateral meetings will, however, be held in Moscow in mid-December 2012. Russia will formally present its presidential priorities to the international conference Promoting Economic Growth and Sustained Development.

President Putin has already announced in a recent address that “the main task of the Russian presidency will be to concentrate the efforts of the G20 on developing measures to stimulate economic growth and create jobs.” In line with these priorities, Russia intends to discuss such traditional G20 agenda items as the state of the world economy, job creation, reform of the world monetary system, stability on the global energy markets, promoting international development, strengthening multilateral trade and combating corruption.

Russia is proposing two new themes: investment financing as the basis for economic growth and job creation and the modernization of national systems for state borrowing and sovereign debt management.

Yet the key issue the presidency needs to address is the restoration of investor confidence, says Russian Finance Minister Anton Siluanov. His concerns in this area are understandable. Economic growth in the locomotives of the world economy — including China — is still slowing down. The southern borderlands of the European Union (EU) are in recession. Not surprisingly, major investors are in no hurry to lose money in the crucible of another crisis. The majority of developing countries, especially in Latin America, are the most affected.

For this reason, Siluanov is certain that investor confidence is crucial for meeting the main global challenge of jump-starting economic growth. Another crucial problem is sorting out the state debts that, in many countries, exceed 100 percent of their GDPs. It is no accident that debt issues will be high on the Russian presidency’s agenda. Moscow will propose designing specific debt reduction programs, the finance minister says.

Asked by RBTH how he saw the improvement of the world financial architecture, Siluanov said that the issue of the formula for calculating International Monetary Fund quotas would be discussed under the Russian presidency.  So far, Russia’s share in the IMF capital is 2.8 percent, compared with the United States’ 17 percent and the EU’s 30 percent. “GDP should be the decisive factor in distributing quotas,” Siluanov said.

This approach is shared by BRICS, the United States and some other G20 members. Small European countries object, however, because they fear their IMF quotas would be drastically reduced. The current distribution of IMF quotas does not recognize realities: the emerging countries are not what they were even 5-10 years ago, Siluanov says. “So it is natural for such countries to want more clout with the IMF and the world financial system,” he said.

Incidentally, a new feature of the Russian presidency will be a BRICS summit to be held on the fringes of the St. Petersburg G20 summit. BRICS already has a hefty package of promising proposals for reorganizing key international institutions — above all, financial and economic ones.

In promoting reform of the international financial architecture, the BRICS countries have more than just their own interests in mind. “BRICS has within its purview much broader interests of all the emerging economies and emerging countries,” said Vladimir Davydov, director of the Russian Academy of Science’s (RAS) Latin America Institute and Corresponding Member of the RAS. “Proof of this is the program for reforming the IMF and the World Bank that was proposed by the BRICS countries. It would strengthen the position of the whole group in the key international finance management structures,” said Davydov.

Gennady Chufrin, a professor affiliated with the RAS Institute of International Economy and International Relations (IMEMO), believes that Russia, as president of the G20, will have an excellent chance of enhancing the role of BRICS in the current balance of power. “At present, we see an obvious pro-Western tilt in the activities of the IMF and the World Bank. That tilt needs to be corrected in favor of the developing countries and BRICS, and Russia as president of the G20 has such a chance,” the expert said.