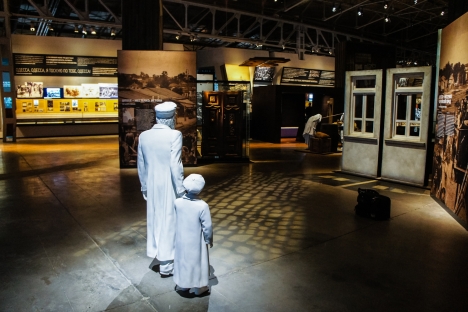 The Jewish Museum and Center of Tolerance in Moscow. Source: Anna Shiller

The Jewish Museum and Tolerance Center explores the oft-suppressed saga of Jews in Russia.

The first thing you do after entering the new Jewish Museum is put on a pair of 3D glasses.

Words pop out at your eyes.

"Where did we come from?"

These are the questions that the subsequent animated movie seeks to answer.

The movie tells the story of Noah's ark. Water sprays.

A plague happens in Egypt. Locusts fall from the sky. "Gnats" whip at the feet of every seat.

The Romans sack Jerusalem. Arrows fly straight into you. The seats vibrate.

The film ends after the Romans finally expel the Jews from Jerusalem, and thus some of them migrate to Russian territory.

That is the introduction to the new $50 million museum that seeks to tell the oft-supressed history of the Jews in Russia, which once numbered at about 5 million but are now officially at 150,000, though the number may be higher.

The rest of the museum is of a much more serious tone than the Disney World-like introduction, but equally high-tech.

Touch screens show the stories of famous Russian Jews throughout the centuries. A short film about the Holocaust has chilling surround sound.

If expensive technology is needed to tell the history of the Jews in Russia, so be it. This is serious history that deserves attention.

Many famous Russians, were in fact Jewish, even if they did not identify as such. Leon Trotsky - a brilliant but cruel revolutionary - was Jewish and propagandized as one, even though he called himself an internationalist and declined to help out the Jews as the Whites carried out pogroms during the Russian Civil War. The singer Vladimir Vysotsky was Jewish too - perhaps contributing to his outsider appeal - but had wide popular appeal under the Soviet Union.

Lenin was later found to have Jewish roots too, but Stalinist anti-Semitism suppressed this fact. This angle isn't explored at the museum, but a recent exhibition explored declassified KGB files. Stalin, the main instigator behind official Soviet anti-Semitism, is portrayed as such.

The museum devotes a great deal of attention on World War II - or as it is called in Russian, the Great Patriotic War. The main film tells a fundamentally Soviet story of the war - Operation Barbarossa, Stalingrad, the Siege of Leningrad and the Fall of Berlin - as narrated by survivors from the war whom are ostensibly Jewish.

The museum also devotes significant attention the Holocaust. As Timothy Snyder wrote in his excellent history of mass killings in Eastern Europe under Hitler and Stalin, "Bloodlands," concentration camps in the East killed more yet are less-remembered than places like Auschwitz because of the grim fact that there were far fewer - if any - survivors. The museum, doing a significant service, remembers the Jews killed under Soviet territory.

Famous refuseniks, Natan Scharansky and Iosif Begin, narrate their stories of trying to emigrate to Israel, only after being imprisoned for years.

The museum ends at perestroika, with Russian Jews - many of whom have left for Israel or the U.S. - saying what the era meant to them.

Therein lies a contradiction, which the museum hopes to push back against, is that many Russian Jews have left the country because of anti-Semitism and have no intention to return.

Russia, like Israel, has its own Law of Return. President Vladimir Putin donated a month's salary of $5,600 to the museum. He has has encouraged Jews to come back, and an estimated 100,000 have taken him up on the offer.

Billionaire Viktor Vekselberg, who like many of Russia's oligarchs, is Jewish, also helped bankroll the project. Unlike many of the oligarchs who emerged in the 1990s, he hasn't fled the country and is an ally to Putin.

The museum ends with a series of large photographs of ordinary Jews living in Moscow photographed against a white background without any pose. The message is clear - Jews are a part of Russia.