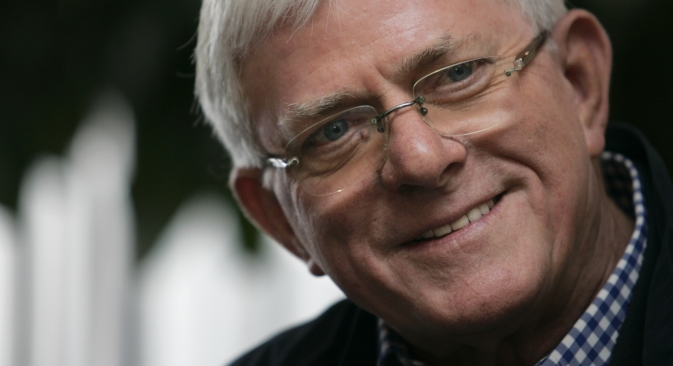 Phil Donahue: "The Soviets at that time were much more interested in us than we were about them." Source: Reuters / Vostock Photo

Three decades ago, Phil Donahue was America’s maverick media personality, the journalist celebrity who frequently acted as our national therapist, exposing and then softening the blows and shocks of a society in upheaval. Vladimir Pozner was an equally charismatic Russian journalist who Americans intuitively trusted — even if he did seem to speak for the Soviet Union at times.

Russian and Jewish, Pozner fled wartime Paris for America with his family on 1940, and attended New York City’s Stuyvesant High School. He returned to Russia, where he went to university and became a journalist.

And when Donahue and Pozner got together, it was almost too much personality for one TV studio. In December of 1985, Donahue and Pozner co-hosted a series of televised discussions among everyday citizens of the Soviet Union and the United States.

These once inconceivable “Space Bridges” between the two Cold War rivals were of course unprecedented. The first Space Bridge was viewed by 200 million Soviet citizens and more than 8 million Americans. Yet even more significant was the platform they provided for ordinary discussion and small connections during times when there were few opportunities for any interaction at all.

RBTH: Why did the U.S.-Russia “space bridges” become possible?

Phil Donahue: In 1985 I was invited to be the host of “Space Bridge,” [a joint television venture]. Gorbachev came to power in April of 1985 and Perestroika was alive and everybody was talking about a new openness.

As the co-host of Space Bridge, I chose to have Seattle on air because I didn’t want, for example, Washington or Moscow where there were a lot of bureaucrats. I wanted to have real people form Seattle and the Russian participants were from Leningrad [now St. Petersburg].

At that time everybody on our side was very suspicious about whether the KGB would control this. ‘They will rig the interpreters, they will rig the audience’ - that’s what we heard. So I was thinking, If I’m going to be duped, will people laugh at me when this is over? The suspicion on both sides was really so great.

And then I heard that the host on the other side would be the guy named Vladimir Pozner. I remembered this name, because Vladimir had appeared on our show “Nightline” in 1980. He was known as the Russian who didn’t sound Russian, as he spoke without an accent.

RBTH: Did you conduct a background check on Pozner?

P.D.: I called Ted Koppel who is a very respected journalist in our country and asked him, ‘What do you think of Vladimir Pozner?’ The answer was, ‘I like him.’ So I thought maybe I can do this without ruining my reputation as a professional.

RBTH: What were the stakes for you as for professional journalist?

P.D.: This was risky for both of us. I don’t want to overstate this. Nobody could put us in the Gulag, but still it was a question of professional reputation. Would Pozner’s career survive, and what would Gorbachev think about it?

We even sent our own people over to Russia to choose the audience. We sent our own interpreters. I also asked Pozner: ‘Are you sure you won’t take me out and won’t edit what I say?’ He assured me that he was not going to do that. ‘Сan I say anything I want?’ Pozner’s answer was yes.

So we went on air and we somehow both survived. Gorbachev, after seeing the tape, said that it would be a gift for 27th Communist Party Congress. Vladimir got almost 100,000 letters and became much more popular in Russia than myself in the United States.

It was a chapter of my life and since then, Vladimir and I have had a friendship that has lasted for all these years. We see each other often. However he gets to the U.S. more than I go over to Russia.

RBTH: What to your mind were the most memorable moments during the Space Bridges?

P.D.: We did a woman-to-woman Space Bridge between Boston and Leningrad. We asked them, ‘May we see what’s in your purses? And they all opened their purses and there were the same things [inside]. It was the beginning, to see ourselves in others. We reached out instead of lashed out. And we saw each other as parents caring about their children, adults caring about their employment, and income, and so on and so forth.

And I think we made a bit of [progress] in what had been a very suspicious relationship.

RBTH: What are the lessons that could be learned from that fascinating experience?

P.D.: I learned from Space Bridges as well as from my visits to Russia that the Russian people were more curious about Americans then we were about them. I recall one show that we did with 300 hundred Muscovites with simultaneous translation. It happened in 1986. The question was: If you were to come to the U.S., where would you like to go?

One should remember that very few people traveled anywhere from the Soviet Union at that time. So answering my question, one person mentioned Las Vegas, another mentioned Disneyworld and then one woman in the back stood up and said “Oxford, Mississippi.” I asked why and heard the interpreter say, “Because it is the home of the great American author William Faulkner.” And I wonder how many Americans knew that.

So the Soviets at that time were much more interested in us than we were about them. Is the Empire State Building the tallest building in the world? How many holidays do you have? These were the questions we were getting from ordinary Russians about America.

I felt badly about what I perceived to be America’s lack of interest in Russia after the “Russian bear” disappeared, and after Reagan’s  [comment about Russia] “Evil Empire” started fading in memory. Instead of taking advantage of this openness now we seem to become less interested. But we have so much to share. Russia boasts one of the most literate populations in the world. The history of Russian art, literature, music, dance and all the technology – you were the ones who put Sputnik in space 1957 – is fascinating.

And for us not to be friends or more cooperative and less suspicious is all the more tragic for me. And I’m hoping that maybe Presidents Putin and Obama will keep pushing this even more. And my grandchildren and Russian kids will begin to talk to each other, and get to know each other in a way that their grandparents never really did.