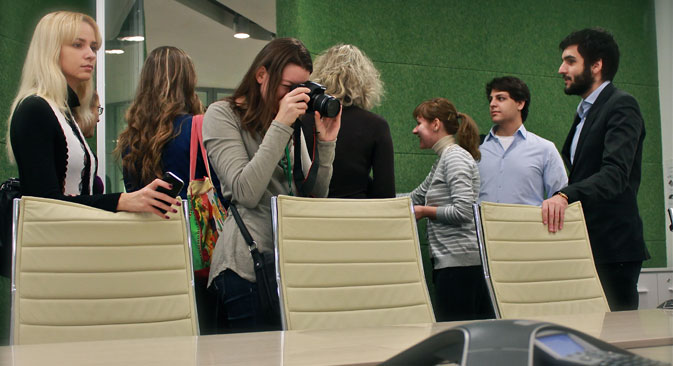 With Barack Obama elected for a second presidential term, Russian and American students sought to draw a roadmap for the second round of the reset.

{***Drawing a roadmap for future collaboration***}

Just as Yandex and Apple are stepping up their collaboration on navigation system projects, Russia and the United States keep strengthening their ties in the field of education and student exchange. This idea came to a group of American and Russian students shortly after their excursion to the office of Russia’s largest IT company, Yandex.

These students served as the delegates for the 2012 Stanford U.S.–Russia Forum (SURF) held in Moscow on Nov. 6-11.

Drawing a roadmap for future collaboration

Students launch the second round of U.S.-Russia reset

The major goal of the SURF conference is to improve U.S.–Russia relations and increase close collaboration between the two countries in different fields, including politics, business, education, space exploration, environmental protection and innovation.

“We are interested in all aspects of U.S.–Russia relations, from cultural and educational exchange to collaboration in space and so on,” said Kira Tverskaya, director of the Communication Department at the SURF conference. “The research projects carried out by our delegates prove it. The thing about SURF is that, after these conferences, there's no more room for flat propaganda. You won't be able to persuade these guys that Russia is aggressive or the U.S. is the number one enemy.”

This year, the conference coincided with the U.S. presidential election and, for the first time, the SURF delegates and officers had a chance to attend the election night party at Spaso House – the Moscow residence of U.S. Ambassador Michael McFaul. In addition, they participated in the so-called shadow election, which was initiated by McFaul in order to observe how Moscow would vote.

From this perspective, this year’s conference was quite unique. The SURF delegates met with McFaul twice. The first meeting was on election night. Two days later, McFaul took the floor before students in Spaso House as a professor, with their second meeting resembling a seminar on international relations and U.S.–Russia reset. The Q&A session left both the students and the ambassador satisfied.

“I appreciated our session with Ambassador McFaul because he communicated with us not as a diplomat but like a professor of Stanford University,” said Yana Nusurbina, a student of economics and finance at the Higher School of Economics.

“Spaso House was a highlight,” said Vail Kohnert-Yount from Georgetown University. “It is always interesting to see your fellow countrymen in other places. McFaul is an incredible public servant and a really wonderful leader. I really enjoyed here his comments on his time in Russia and what he thinks the future of U.S.-Russia relations are.” 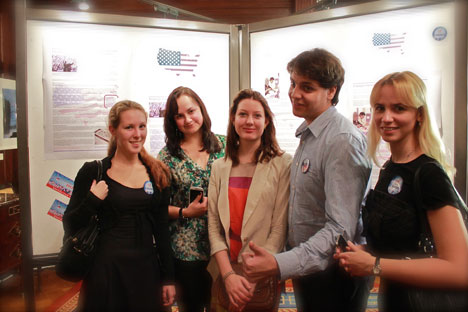 The SURF delegates during the Election Night in the Moscow residence of U.S. Ambassador to Russia Michael McFaul. Source: Pavel Koshkin

“During the previous conferences SURF delegation didn’t visit Spaso House,” said Tverskaya. “We're very grateful to Ambassador McFaul for all the support and to U.S. Embassy officers who took the floor as speakers at the forum. They were really encouraging, and both visits to Spaso House were quite inspiring for the delegates and officers.”

During the first part of the conference in Moscow, students had chances to meet with Russian and American high-profile experts, diplomats, entrepreneurs and academics. For example, this year the conference was attended by New Economic School President Sergey Guriev, Institute of Middle Eastern Studies President Yevgeny Satanovsky, and U.S. Embassy in Moscow Press Attaché Joseph Kruzich.

In addition, Vice President of the Presidential Academy of National Economy, Carol Leonard, and Sergei Aleksashenko from Aeroflot’s Board of Directors also took the floor during the Stanford forum.

“The conference gave me a chance to communicate with high-profile experts and specialists whom I would never meet in my day-to-day life,” said Nusurbina. “I mean Russia’s prominent economists Sergey Guriev and Sergey Aleksashenko, who gave very interesting insight on U.S.-Russia economic collaboration and discussed with us the thorny economic problems. In addition, we became familiar with the results of different economic research.”

Forty Russian and American students will work together on research papers over the next six months, to come up with proposals on how to root out the mistrust between countries and find more intersecting interests between Russia and the U.S.

“I appreciated people that I got in touch with at the SURF conference because they all have a great background. I hope we will make good research projects, since one of the main factors of any success is the people around you,” said HSE alumnus Igor Vinidiktov.

Enthusiasm vs. lack of funding

Regardless of financial difficulties and lack of funding, the students did their utmost to organize the conference on a decent level. Driven by enthusiasm and the aspirations to establish close ties between the two former Cold War rivals, the SURF delegation proved that Russia and the U.S. could team up, find common ground and draw a roadmap on how to deal with global problems together.

When asked about the organization of the forum, SURF President from the Russian side Kate Markaryan made no bones about the difficulties they faced.

“It was pretty challenging,” she told RBTH. “The Russian officer team is pretty young in comparison with last year; we had less experience, almost no funding, and we worked by a nonstop schedule. That may be the reason why the conference was a bit less formal and more human than in previous years.”

This year SURF was faced with a lack of funding for the first time, according to Markaryan.

“We didn't have any sponsors, and the conference was expected to take place in less than a month,” she said. “But we had some money left from the previous year, and our friends, SURF alumni from RuSpeak Company, also helped us. And that's all we had for hosting, feeding and transporting more than 50 people from the U.S. and Russia. But still, we found ways, and it's almost a miracle.” 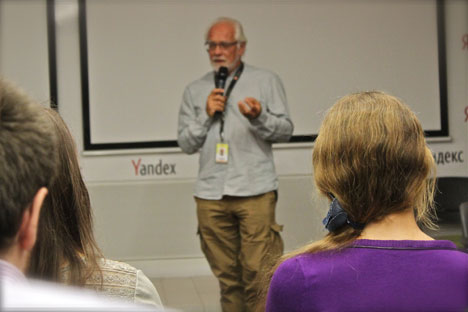 Another highlight of the 2012 SURF conference in Moscow was an excursion to the Yandex office. The delegates had a chance to talk to the company’s marketing director, Andrey Sebrant. They discussed a variety of topics with him: Russia’s IT market, start-ups and projects such as Yandex’s collaboration with Apple on navigation systems, the company’s new browser and the Yandex.Money project.

Delegates were very impressed with their trip to the Yandex office.

“Yandex was very interesting,” said Marek Hlavac, a political economy student from Harvard University. “I wasn’t aware of this company before I came to Russia. The core of the [Yandex] facilities was really fascinating.  We appreciated the Q&A meeting with the Yandex director of marketing.”

“Yandex was one of the most memorable moments,” said Fadi Farsakh from UC Berkeley. “It was pretty unique and different from what we’ve done during the conference.  I wouldn’t mind working in such a place with a lot comfort and creativity.”

“Yandex looks like a typical office of an American IT company, with the same structure and creativity,” said Nusurbina. “I was in the U.S. this summer and we visited a number of offices of American start-ups. They are constructed in the same way, so that people can work in very comfortable conditions that encourage creativity.”

Refuting stereotypes contributes to the reset

Markaryan believes that conferences like the Stanford forum are a very important tool in contradicting the stereotypes between the two countries and building up a partnership based on mutual trust and understanding.

“People interact with each other, they share their opinions, they exchange experiences and, step-by-step, they get rid of the deep-seated prejudices,” she said. “After every SURF conference we have a totally different level of human relations between our officers and delegates from both countries.”

Although SURF seeks to increase collaboration between Russian and the U.S., Tverskaya is more-or-less realistic about the future of U.S.-Russia relations. 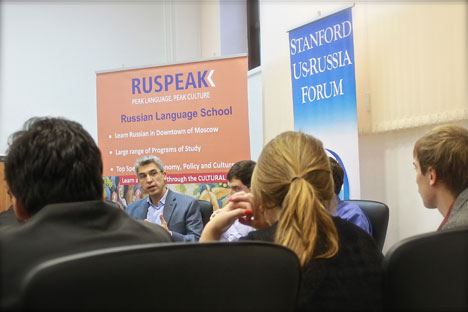 “Russian-American relations can't just simply be ‘reloaded’ or whatever,” she said. “This is hard, phased work, and SURF is one of the little blocks that start building a pyramid [or at least add up to it].”

“I had very high expectations and the conference has exceeded them,” said Kohnert-Yount from Georgetown University. “My favorite part is just interacting with other students. Everyone is extremely welcoming. The first time I came to Russia earlier this year, I didn’t expect students and everyone to be so warm and welcoming.” Conferences such as these are a good way to build reliable relations between the countries, she believes.

“It is a very useful way to meet people from Russia,” said Hlavac from Harvard. “There were some interesting panels, especially. I was interested in listening to economic policymakers and our meetings with American high-level diplomats in Russia – particularly, with Ambassador McFaul.”

“This is the first time I came to Russia. I thought it would be very interesting to collaborate with Russian students.  The level of professionalism of the conference impresses me.  I think that the conference was a success over all,” said Farsakh. “I’m pretty excited to see Russia’s students come to Stanford and to show them the same hospitality.”