How Russia’s professional drivers stacked up in 2012 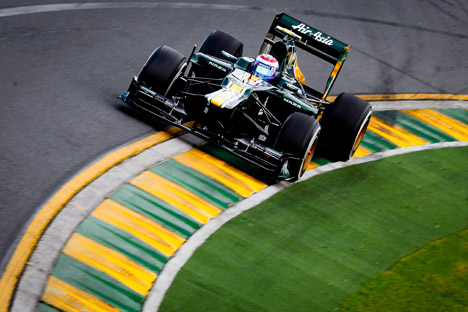 The recent Formula One season was remarkable for active Russian participation. Source: ITAR-TASS

The recent Brazilian Grand Prix brought the Formula One (F1) season to a close. As in other motor sports events, the season was notable for heavy Russian involvement: Vitaly Petrov completed his third F1 season; the World Series by Renault saw record Russian participation; and, in the World Rally Championship, youngster Yevgeny Novikov made a splash by finishing in the top six.

In terms of status and outside interest, of most significance was Vitaly Petrov's drive for Formula One's Caterham team. This past season, his third, was not a smooth ride.

First, the Russian's participation in the world’s most prestigious motor sports event was in doubt up until the very last minute. Second, despite remaining in the competition, he had to come to terms with driving a technically inferior car.

Caterham is no Lotus, and Petrov drove for the latter team (previously known as Renault) in his first two championships. It is hardly surprising that, throughout the season, he had to settle for a mid-place finish at best, often coming in at the back of the field. This naturally reignited talk of his possible exit from Formula One.

However, Petrov still managed to finish the season on a positive note. "At the Brazilian Grand Prix, he finished 11th, which helped his team take 10th place in the Constructors' Championship," said his manager, Oksana Kosacheno.

"That's important," Kosachenko said. "Believe me, because every place in the table brings in extra sponsorship. So the mood right now (both ours and Caterham's) is positive."

The driver himself had at one stage begun to ponder his future in the sport. "But, I repeat, the outlook now is positive, and a decision will soon be made about where Vitaly will continue his career. Besides Caterham, we are in negotiations with another team," she added.

As for the other elite competitions, the World Series by Renault, which competes with the GP2 Series for second place behind Formula One, welcomed its largest ever Russian contingent — it was enormous.

One of the stages was held in July at the Moscow Raceway, just outside the Russian capital. The championship featured RFR (the first team ever to compete under a Russian license) and its two Russian drivers: Mikhail Aleshin and Anton Nebylitsky.

Three other Russians competed for foreign teams: Sergey Sirotkin and Nicholai Martsenko for BVM Target, and Daniil Move for P1 Motorsport. Their results were slightly less impressive. Aleshin, Move, and Martsenko all posted a top-20 finish, but in the bottom half: 13th, 17th, and 20th, respectively.

However, fans had reason to cheer Mikhail Aleshin's performance in the 2010 World Series by Renault. Aleshin has six top-10 finishes to his name, plus the fastest lap on the famous Nürburgring track, pole position and a place on the podium (2nd place) at the final race of the season in Barcelona.

Aleshin told Kommersant that he is currently in talks "with different teams in different series... But I'm not yet sure where I'll be next season. However, my focus has not changed. I'm still aiming for Formula One and the series just below it."

Russian drivers were also represented last season in other high-profile competitions, such as the legendary 24 Hours of Le Mans, in which the G-Drive team competed. According to Roman Rusinov, one of the team's drivers, the season was fairly successful overall.

"The team showed its speed and, if not for some bad luck, could have achieved more. In Le Mans, we were actually fighting for 1st place, but a tire blew when I was driving. As a result of the unscheduled pit stop, we dropped to 4th. But in the World Endurance Championship (WEC), we were on the podium at Silverstone and led in Bahrain — only a small technical hitch stopped us from going all the way," he said.

As for the future, Rusinov confirmed that he intends to remain in the WEC.

Russia's best driver this season was, perhaps, not a circuit racer, but a specialist in a different genre: rallying. Yevgeny Novikov caused a real sensation in the world championship. Twice (in Portugal and Italy) Novikov took 2nd place; and in 13 championship races he recorded nine top-10 finishes.

As a result, he took 6th overall in the final table. Novikov now has a real chance of securing a drive with a works team next season. A spokesperson for the driver told Kommersantthat he is in direct talks with three teams: M-Sport Ford and the two giants, Citroen and Ford.