Real estate in for a spell of costly financing 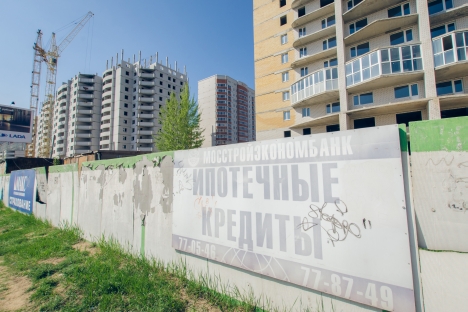 As the rapid growth of mortgages is cut in half, market participants come up against a serious problem: raising money amid constantly rising interest rates.

The market cooled down fast primarily because of increasing financing costs and external factors, such as the European crisis.

Moscow accountant Marina Morozova, 27, has finally bought herself a home by taking a mortgage at 12 percent per annum.

“I had wanted to buy a place of my own for a long time and I finally decided to take out a mortgage when I saw the rates were down,” she confessed.

In 2012 as a whole, the overall lending volume may top the psychologically important level of 1 trillion rubles ($32.3 billion) for the first time, marking a 40 percent annual rise. Apparently, however, the rapid growth of the Russian mortgage market will end there.

Experts are already pointing to a certain slowdown. According to the Bank of Russia, mortgages issued in September amounted to a modest 89 billion rubles ($2.9 billion), a mere 26 percent above the previous year. The Central Bank’s move to raise the discount rate, which brought about an increase in interest rates virtually across the board, involving most major lenders, put a dampener on the mortgage market.The October statistics are predicted to be even worse.

According to market participants, the market cooled down fast primarily because of the increasing financing costs and its dependence on external factors.

“All banks are quoting higher rates on the interbank lending market,” Kommersant newspaper quoted Andrei Vladykin, head of the mortgage and lending department at the real estate agency NDV, as saying. “With the Bank of Russia’s financing costs rising and high country risks preventing foreign investors from giving out cheap loans, personal deposits emerge as the only way to raise the money, and here we’ve recently seen an increase in rates. So loans are gradually getting more expensive and this is likely to become a market-wide trend.”

As it happens, the dependence of the Russian mortgage market on the situation surrounding troubled European banks impacted primarily on foreign banks operating in Russia. As such, Absolut Bank and Raiffeisen Bank were the first to drop out of the top 10 banks in terms of loans extended in the first half of 2012, with their mortgage lending tumbling 21 percent and 17 percent respectively.

This, incidentally, was in sharp contrast to their results in the same period a year earlier, when their mortgage portfolio growth had exceeded 400 percent.

Most lending agencies have so far managed to maintain growth figures, but this will become an increasingly difficult task next year.

Deputy General Director of the Agency for Housing Mortgage Lending, Andrei Semenyuk, expects market growth to stay under 20 percent in 2013. Some other market participants are even less optimistic.

“Next year, the market is likely to remain at the same level or even contract, because of the increased rates. Expert opinions differ, ranging from 900 billion is this a rubles figure? Does that currency need inserting to 1.2 trillion rubles a year”, says Roman Slobodyan, head of mortgage product sales at Nordea Bank.

With no prospect in sight of inflation and hence of a decrease in the refinancing rate, the development of securitization appears to be the only practical solution to the current liquidity problems facing Russian banks.

Meanwhile, the market leaves much to be desired. At this point, mortgage bonds account for no more than 10 percent of the total lending volume, although Russia’s Housing Mortgage Lending Strategy, adopted in the summer of 2010, expected the figure to reach 45 percent in 2012. Furthermore, in line with this strategy, most loans (up to 70 percent) are to be refinanced through securitization as early as 20 years from now.

As it is, however, Russian lending agencies are extremely reluctant to mess with derivatives. According to the latest Expert RA poll, a mere 25 percent of market participants have any securitization plans for the next couple of years.

Nevertheless, certain progress has been made in the development of this funding tool. In recent years, the Agency for Housing Mortgage Lending (AHML) has been able to replace all foreign deals with domestic ones, which encourages domestic demand for mortgage bonds.

The agency pins hopes on syndicates being formed to issue mortgage securities to help small banks lower their risks and securitization costs. Yet for this idea to be viable, the legal framework and mortgage lending standards need to be updated and adjusted.

Alexander Semenyaka, CEO of AHML, says: “The mortgage-backed securities programme of the U.S. national mortgage association Ginnie Mae helps banks make several syndicated issues a day. This is a model we’d like to adopt, but it requires serious changes in the law on mortgage-backed securities. Banks must have confidence in the quality of each other’s loans and must agree to abide by a common standard.”

At this point, the agency is forging ahead with its debut syndicated deal, which will deliver model documents and streamline the issue mechanism.