The End of the World: Nothing new for Russia 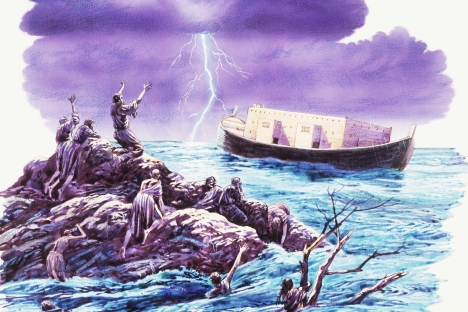 Holy Writ relates how the onset of the Apocalypse will be announced by a number of portents. Any self-respecting medieval eschatologist could rapidly list off at least a few dozen of these omens. Source: Getty Images / Fotobank

This year marks the 520th anniversary of the first Russian “End of the World.”

There is no question that people have become fascinated by the prospect of a global apocalypse and the subsequent Last Judgment. This is true not only in Russia. People all across the globe, from Mexico to China, are waiting for the world to come to an end – just as they did in Rome and Byzantium in A.D. 1000.

Maybe this is the same kind of dread that spread all over Western Europe and the United States in anticipation of the “Y2K” computer meltdown. In any case, perhaps no other country is taking the End of the World quite as seriously, and with as much attention to detail, as Russia.

This is hardly surprising, given that Russia itself appeared on Earth as a result of the previous End of Days, which fell in 1492. This was Russia’s very own unique and private End of the World, and one that passed by Europe completely unnoticed. This particular doomsday was not calculated by distant overseas tribes, but by the calendar of the Russian Orthodox Church, according to which the seventh millennium since the creation of the world would draw to a close in 1492.

According to this liturgical chronology, the lifespan of Man, bestowed upon him by God, is only 7,000 years – that is, 1,000 years for each of the days of creation recounted in the Book of Genesis. Holy Writ instructs that the Last Trumpet might sound on any day, at any hour. Scripture also relates how the onset of the Apocalypse will be announced by a number of portents; any self-respecting medieval eschatologist could rapidly list off at least a few dozen of these omens.

Such signs followed a consequential order. In 1445, for example, Moscow burned to the ground after being struck by a bolt of lightning. Just a year later, the people of Moscow and Vladimir witnessed an unprecedented phenomenon for the Russian heartland – an earthquake. Finally, the most threatening omen of disaster came in 1453, when the nerve center of the Eastern Church, Constantinople, fell to the Ottoman Empire.

The onset of Armageddon was dealt with in different ways. Some donated money to the Church, while others – notably in Veliky Novgorod – went in search of a way out. Having already bought off the invading Mongol hordes, the people of Novgorod decided to buy their way out of the Apocalypse too.

Local scribes came up with the theory that different peoples would meet the Last Judgment on different dates, depending on when their calendars flipped over to the year 7001. Noting a handy discrepancy of 300 years between the traditional Jewish calendar and that of the Russian Orthodox Church, they reached a useful conclusion: converting to Judaism would buy them an additional three centuries.

However, as the fateful day drew nearer, other considerations began to emerge – specifically, that the End of the World heralded not only the end of the old and wicked world, but also the beginning of a new one. This assertion was made by Archbishop Vassian of Rostov in 1480, at the very time when Moscow was undergoing the brunt of the attacks from the hordes of Akhmat Khan.

Vassian wrote his “Epistle to Ugra” to Grand Prince Ivan III, laying out a building plan for a new state of Russia. The most notable element of the document was that it marked the first time the title “Czar” was used for the Russian monarch; the title had previously been used only by Byzantine Emperors and the Khans of the Great Horde, in relation to the lands of Russia.

However, with the fall of the Byzantine Empire, Vassian reasoned that the title now fell to the Grand Prince of Moscow, who should rightly be the spiritual and political heir to the legacy of the Byzantine emperors.

The archbishop went on to enumerate the spiritual and political nature of the Czar’s powers: namely, that a true Orthodox monarch should be primarily a “Defender of the Faith” and a “Warrior for Christ.” Thus, Vassian concluded, there was no need to fear the End of the World; the Lord had forgiven the land of Rus, and, with her shackles of “Babylonian servitude” cast off, she would rise to glory and greatness.

Of course, the claims of Moscow’s Grand Princes to being the overseers of the Church hierarchy and the “Chosen People of God” were not greeted by Russia’s other Grand Princes with universal optimism or enthusiasm. In fact, Ivan III was seen in the eyes of the people of Novgorod and Yaroslav as the embodiment of the very Antichrist whose rise to power is forecast as a portent of the Last Judgment.

Time, however, was on the side of Ivan III and his descendants. The doomsday of 1492 came and went, leaving the supporters of eschatological theories in disbelief and disappointment. The exciting prospects of building a Third Rome, however, remained not only in the minds of Ivan’s subjects, but also throughout one-sixth of the world’s habitable land.

So why worry about the End of the World?