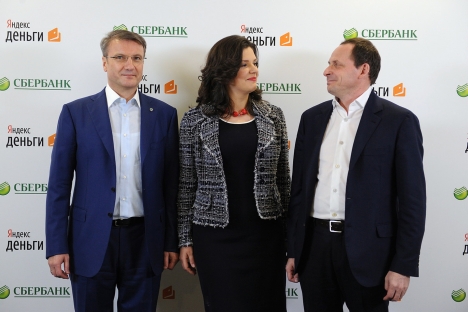 Russia's largest state-owned bank, Sberbank, has bought a stake in Yandex.Money, one of Russia's leading online payment systems. The success of the partnership depends on whose corporate policy prevails.

On the evening of Dec. 19, Sberbank and Yandex.Money, a subsidiary of Russian company Yandex (which last year successfully IPOed on NASDAQ) announced a merger. The bank will purchase 75 percent of the share capital, minus 1 ruble of the LLC, which owns Yandex.Money. A 25 percent blocking stake, plus 1 ruble, will remain in the hands of Yandex. The joint company's board of directors will be made up of three people from Sberbank and two from Yandex.

The deal has caused a stir on the market — not so much regarding the details of the new service but, rather, whether or not the project actually has a future. Despite head of Sberbank German Gref's efforts to modernize in recent years, Russia's largest bank cannot shake off its reputation as a Soviet bureaucratic behemoth. At the same time, Yandex is seen as a shining example of modern Russian business, able to square off against the likes of the global giant Google.

"If Yandex.Money had been bought by someone with a proven track record of exploiting such assets (such as online bank founder Oleg Tinkov), people would have reacted differently to the deal and would now be discussing the integration of the new service," said Vladislav Solodkiy, director of the venture fund Life Protection.

In the meantime, experts agree on just one thing: If the business model of Yandex wins out, the project will be the number-one player on the market. If not, Sberbank's embrace may destroy the internet company's corporate culture.

"If Sberbank gives Yandex.Money a cash injection and keeps its nose out of day-to-day operations, the banking market will have a serious competitor on its hands. It will be a threat not only to e-money systems but also to traditional banks. But, if Sberbank tries to intervene in the operation of Yandex.Money and integrate it into the company's banking structure, the market has nothing to fear. The scheme is unlikely to be workable," Promsvyazbank's director of online retail banking, Algirdas Shakmanas, told Cossa.ru.

The two sides insist that Sberbank has no intention of interfering in the operational management of Yandex.Money, as evidenced by the fact that the company will retain its management.

"The board will meet to approve the budget and adopt a set of key strategies," chairman of the board of directors and a head at Yandex.Money, Yevgeniya Zavalishina, said in an interview with RBTH.

In addition, she believes that the deal represents the next step in the policy of modernization and that the collaboration will enhance the company's reputation. However, the vice president of Sberbank has his own take on the situation: Denis Bugrov claims that Yandex and Sberbank are very similar in terms of both outlook and management style. That is why the two companies found a common language.

"We do not see any clash of cultures," Bugrov told RBTH.

Neither side has any desire to discuss their joint plans. The partners do not hide the fact that many of the bank's settlement operations are small payments (mostly for utilities), which can now go online and relieve the load on bank branches.

Moreover, the move will help Yandex.Money to expand its client base. Zavalishina remarks that their partner has a wealth of experience and expertise in finance, plus tens of millions of customers. Many of these customers, however, are unfamiliar with the workings of the Internet.

"Yandex, on the other hand, has tens of millions of Internet users and vast experience in the development of mass services. Together, we can create unique set of products for all," said Zavalishina.

What was for sale?

The payment system Yandex.Money was launched in 2002 as a partnership project between Yandex and PayCash (Yandex bought out its partner in 2007). It is an online payment service allowing users to create an e-wallet that can be used to pay for cell phones, Internet, Skype, games, tickets, and utilities, as well as to transfer money to a bank account or to users of other payment systems.

The limit per transaction is 15,000 rubles ($486) for anonymous users and 100,000 rubles for identified customers (there is no limit on the number of transactions).

Yandex founder and CEO, Arkady Volozh, says that the company was originally established to settle accounts with advertisers: They were able to use their wallets to remit small sums to Yandex.

Now, he notes, Yandex.Money has 12 million users, many of whom are not Yandex advertisers. According to TNS data for February 2012, Yandex had the largest share of e-money users, at 54 percent. In 2011, Yandex.Money's revenue (excluding U.S. GAAP-based intragroup settlements) amounted to 383 million rubles; for the first of nine months of 2012, the figure was 374 million rubles.

Why was it sold?

Back in 2011, Volozh said that a majority share of Yandex.Money might be put up for sale in connection with the entry into force of a new law on national payment systems (effective starting September 29, 2012).

The law revolutionized the e-money market. Electronic payments, previously unregulated, were officially recognized as a form of non-cash payment, and companies in the sector fell under the purview of the Central Bank. The law required all e-money systems, starting 2013, to operate either as non-banking credit organizations (NCO) or as banks.

Owners of e-payment systems had to expend tremendous effort and resources to bring their businesses into compliance with the law, says director general of RBC, Sergei Lavrukhin. They were also "rattled" by the prospect of having to provide daily payment reports under a regulation which, according to rumors, the Central Bank could have introduced at any moment.

In his view, companies for which e-money was not a core business found it more profitable to opt out. He recalls that, in the fall, RBC Holding parted company with its RBC Money project, selling 74 percent to minority shareholder Andrei Morozov.

Yandex.Money accounted for less than 2 percent of Yandex's revenue, says a Yandex spokesperson. Meanwhile, Volozh asserts that Yandex was making progress in its online project by attracting a target audience and designing an intuitive interface; Volozh himself, however, had no desire to go into the banking business. This is why, despite Yandex.Money's newfound NCO status, the company decided to sell.

Why it was bought

The deal with Yandex will give Sberbank access to a convenient and user-friendly tool, which will gradually come to replace credit cards and bank accounts worldwide, says chairman of the National Association of Electronic Traders, Boris Kim. He notes that Sberbank is one of the first banks in the world to understand the importance of staking out a niche in the e-payments market; no other global e-payment brand, be it PayPal or Google Wallet, has entered into a partnership with a bank.

"For the bank, it represents an additional channel through which to attract customers and another product (an e-wallet) to offer to people who do not have a Sberbank account or card, but for whom e-money is a convenient payment option," says vice president of Svyaznoi Bank, Oksana Smirnova-Krell.

“Retail is going online, and Sberbank this year started issuing credit in stores,” she says. “People can buy goods through a shop’s website, receive a credit loan from Sberbank via Yandex.Money, and use the same service to pay it off.”

This report is based on materials by Vedomosti and Cossa.ru.