Once again, Russia and Georgia try to find common ground 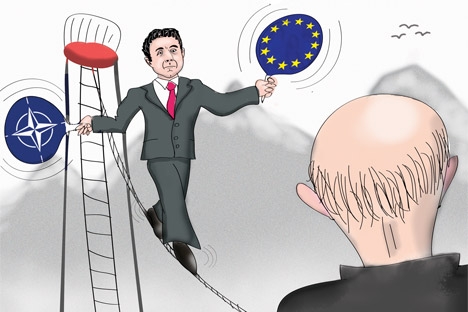 Russian pundit Sergei Markedonov and his Georgian counterpart comment on the first direct talks between Russian and Georgian diplomats since the “hot August” of 2008.

Read Igor Gvritishvili's opinion on the next page.

On Dec. 14, Russian and Georgian diplomats met in Geneva for the first time since the 2008 “five-day war,” signaling a transition in the normalization process from words, speculation and forecasts to a more practical phase. How far will it go?

The dialogue between Russian Deputy Foreign Minister, Grigory Karasev, and his opposite number, Georgian special representative to Russia, Zurab Abashidze, will proceed on a regular basis. This is arguably the main result of the Geneva meeting. After years of a “freeze” in bilateral relations, it would have been unrealistic to expect anything more.

There are, of course, pragmatic reasons for the two countries to seek cooperation. The Georgian Dream coalition won the October parliamentary elections. Even if the United National Movement had won, it would have made no difference to the fact that much of the population in the Trans-Caucasus republic is engaged in agriculture, which requires access to the Russian market.

Although the sector accounts for just 8 percent of the GDP, 50 percent of Georgian citizens work in agriculture. During the election campaign, members of The Georgian Dream repeatedly criticized the previous government and President Saakashvili for neglecting the Georgian economy and, most notably, the agricultural sector.

Thus, the bid to enter the Russian market has internal political significance for the new cabinet, which has to keep its promises.

Whoever is prime minister or president of Georgia, the fact remains that the country has common borders with the North Caucasus republics. Previous experience shows that the weakening of Russia’s position in the North Caucasus region does not make Georgia any more stable or secure. This was highlighted by the events in Abkhazia, South Ossetia and Chechnya.

Moscow would also welcome it if Tbilisi assumed a friendly position on the North Caucasus, because providing a “safe haven” for militants on the other side of the Caucasus Ridge would add to Russia’s security problems in that turbulent region.

Nor should one forget about Armenia, Russia’s strategic ally in the South Caucasus with which it has no common borders. Georgia is wedged between the two allies, and its political approach matters for the dynamics of Russian-Armenian relations.

At the same time, however important the motives for the two countries to normalize relations, swift results are unlikely. The first thing that springs to mind is the issue of the status of Abkhazia and South Ossetia.

One may argue whether Russia made the right choice in August 2008, but Moscow cannot backtrack now without sustaining significant political damage. What would be left of confidence in Russia as a reliable partner and patron if it decides to make a U-turn?

In Georgia today, even marginal political groups would embrace the idea of “restoring territorial integrity.” National traumas from the loss of two former autonomies are too strong for anyone to admit what Moscow calls “the new reality.”

One should not discount Mikhail Saakashvili. He has suffered a setback, but he has not laid down his arms. Witness the cool reception of the new Georgian foreign minister in Washington and the new Prime Minister Ivanishvili in Brussels. The West does not want the Georgian political scene to be totally “cleansed” of the supporters of the country’s third president. That is an important factor.

The “national” party in parliament is still quite large. There are no grounds for expecting that it will be happy to see the new government improving relations with Moscow. The old phobias and fears will be resurrected to bring home the message that nothing good can be expected from Russia.

Last but not least, the history of Russian-Georgian relations has shown that every new attempt to improve them has prompted a wave of inflated expectations. Thereafter, these positive emotions clashed with reality, causing widespread disenchantment. At the current stage, it is important to avoid making unjustified promises and generating unjustified hopes.

Sergei Markedonov is guest research fellow of the Russia and Eurasia Program at the Center for Strategic and International Studies in Washington. First published in Russian in the Vzglyad newspaper.

The way forward for Russia and Georgia

The dialogue between Russia and Georgia will proceed only if both parties admit that they are unable to agree on the status of Abkhazia and South Ossetia, stop dwelling on this topic and move forward.

A milestone occurred recently in Russian-Georgian relations when Russia’s deputy foreign minister, Grigory Karasin, met with the Georgian prime minister’s special representative for Russia, Zurab Abashidze, in Geneva. This was the first direct contact between official representatives of Moscow and Tbilisi in the last four years.

Describing the meeting, Karasin noted that it was marked by a businesslike and constructive atmosphere. “We have agreed that the dialogue in this format will continue on a regular basis,” said the deputy foreign minister.

On what can Russia and Georgia agree? What mutual concessions are the two neighbors ready to make?

There are too many obstacles in the way of a constructive dialogue, in the wake of the Georgia-Russia war of August 2008. As a result of the war, Russia recognized the independence of Abkhazia and South Ossetia, while Georgia responded by breaking off diplomatic relations with its northern neighbor and passed laws declaring the former autonomies to be occupied territories.

Russia would like to see Georgia repeal the law On Occupation, recognize Abkhazia and South Ossetia as parties to the conflict, and stop its active policy of not recognizing these republics. In addition, Moscow would like Tbilisi to stop supporting refugees at the U.N. and other international organizations. In short, it wants Georgia to take concrete steps to indicate that the “war” with Russia is over.

Furthermore, Russia insists that Georgia put the brakes on its integration into NATO and the European Union. Compromise in these areas is practically impossible.

However, Georgia could tone down its anti-Russia rhetoric, stop jamming Russian TV channels broadcasting to the country, release arrested Russian citizens (including those suspected of spying), and restore regular air travel with Russia.

What can Georgia hope to receive in exchange? Moscow’s response would most likely be confined to the following steps: lifting or substantially facilitating the visa regime for Georgian citizens, making a commitment to not using force against Georgia, suspending the policy of seeking recognition for Abkhazia and South Ossetia, and restoring trade and economic ties.

There are some other issues that may be solved, given political will. For example, the OSCE and the U.N. do not have missions in Georgia, because Russia has vetoed them. These missions may be restored, and Georgia may also demand the Trans-Caucasus Railway (Transkam) be reopened.

However, another question arises: is any of this possible in the absence of an agreement on the status of Abkhazia and South Ossetia? Indeed, dialogue may go ahead. With some fundamental unresolved issues connected with the disputed territories, it is still possible to start a dialogue with Russia (as well as with Abkhazia and South Ossetia) and to take concrete steps to improve bilateral relations.

Georgia hopes for restoration of trade with Russia

For this to happen, Russia and Georgia should recognize that they cannot agree on the status of Abkhazia and South Ossetia and stop forcing these topics on each other.

The main thing now is to make a correct and sound analysis of the mistakes and miscalculations in bilateral relations. This involves renouncing recriminations and setting about establishing a constructive dialogue that is sure to gain the support not only of Georgia’s Western partners and Russia’s allies but also the peoples of these two countries.

Igor Gvritishvili is a political scientist and leading member of the all-Russian movement In the Name of Georgia.