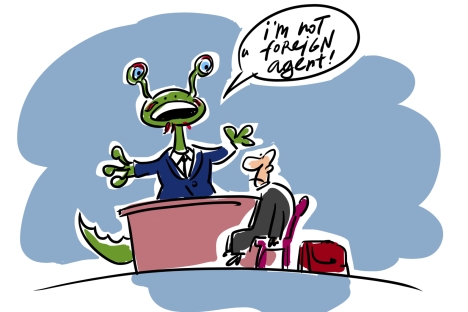 While the Federation Council backed the anti-Magnitsky bill that, besides banning adoptions by Americans, suspends operations of NGOs supported by U.S. agencies, pundits Dmitry Babich and Boris Altshuler resumed discussions on the controversial NGO law.

Read Dmitry Babich's opinion on the next page.

I’ve lived in Russia since I was born here in 1939, and I never cease to be amazed. It’s definitely the most interesting country in the world. Interesting, I mean, for its unpredictability and irrationality. Due to some poetic magic here, a word or phrase can often become the prime mover of a campaign. Which Kremlin genius – or group of geniuses – came up with the bright idea for 2012?

I’m talking about the Stalin-era phraseology “foreign agent.” But the rhetoric hit the spot – millions of Russians immediately began looking around for Enemies of the People. When the Bible scribes wrote, “In the beginning was the Word,” it was Russia they had in mind.

But let’s come back down to Earth. Immediately after this daft law was published, in early June (the government rushed it through in a single day, which indicates the heights from which the “order” came) a slew of protests began. On July 2, I made an announcement that this law’s definition of a “foreign agent” was so wide, that it would encompass organizations such as the NGO “Children’s Rights” (I am the head of this organization) and even the Russian Orthodox Church.

On the same day these considerations received the support of the chairman of the Presidential Council, Mikhail Fedotov – and on the very next day, the State Duma brought in amendments to the bill, which excluded religious organizations from its measures. Actually I’m pretty cross with myself for my efforts, because the idea of the Russian Orthodox Church as a foreign agent would have been quite amusing.

The Public Chamber of the Russian Federation came out fiercely opposed to the legislation. This happened on account of the initiative of the chairperson of the board, Elena Topoleva-Soldunova. Surprisingly, when the matter later came to a vote, it was upheld by 125 of the 126 members of the Public Chamber.

As a consequence of objections, a number of humanitarian activities – including “the protection of mothers and children” were excluded from the legislation. This all means that the NGO “Children’s Rights” can receive overseas aid without any hindrance – and I humbly take this opportunity to request it.

I ask this, because after 16 years, our organization is now catastrophically underfunded, and at the point of closure.

Frankly, for those of us who have been defending rights since the Soviet era, all of the game-playing of recent days is little more than entertainment. Sure, they can write their warnings, take us to court for seeking foreign funding, threaten us with reprisals – and worse.

The Moscow Helsinki Group, the “Voice” Association, the Human Rights movement, “Children’s Rights” and other rights groups will not, of course, come forward to register as foreign agents, and instead we rub our hands with glee in anticipation of an interesting stand-off with the authorities.

However, it’s an entirely different picture for NGOs all across the country that may have received some minimal amount of foreign aid. Their position is now imperiled, since their regional authorities now have them under the microscope as foreign agents – which could jeopardize their status as not-for-profit entities.

Updates on this situation are now coming in constantly from every region of Russia – it’s a serious and extremely threatening situation. The foreign agents law is a vicious blow to Russia’s emerging civil society and a juicy bone for corruptible regional authorities. The victims? The Russians who are helped by these NGOs.

Boris Altshuler has been at the forefront of the human rights movement since the 1970s.

I am sick and tired of generalizations about the “authoritarian trend” in Russia, which the Western press sees in just about every cough of the Russian government. How many foreign correspondents actually read the law on foreign-financed NGOs, which obliges organizations with foreign funding to make their political activism transparent?

How many journalists in Russia and abroad read the American Foreign Agents’ Registration Act, which the Russian law actually copied almost word for word? I bet the number of such journalists and politicians is in single digits. But there were literally hundreds of “concerns” expressed and hysterical ruminations set on paper or electronic devices on the terrible meaning of the words “foreign agent” for a Russian ear.

In Zamyatin’s novel “We,” one of first 20th-century dystopias, people live in transparent buildings, making it extremely easy for the police to track their thoughts and movements. In Nabokov’s novel “Invitation to a Beheading” a dissident thinker named Cincinnati is executed for being “non-transparent.”

By the way, Transparency International is rather non-transparent about its methods of determining high corruption levels in countries which do not participate in its financing – for example, France and Russia.

It turns out the term “foreign agent” was coined by Americans. The ethnic Japanese who happened to live on American territory in 1941-1942 can testify to the fact that being called a “foreign agent” at that time was deeply unpleasant. So, why is Russia the only country called out over its short memory for tragic pages in its history?

There are many cases when recently adopted Russian legislation did not fulfill the apocalyptic expectations of the perennially pessimistic press – the Western one and the domestic liberal one. The creation in 2009 of a “Commission on Prevention of Falsifications of Russian History to the Detriment of Russia’s Interests” stirred a real storm in the press and led to numerous pronouncements of the “return to Stalinist practices” in a number of media outlets.

The outcry was almost as great as now, with the foreign NGOs’ bill and the public gatherings’ bill combined. And what came out of it all? In 2012, the commission was quietly shut down. During the three years of its work, the commission did not ban a single book or movie, never got involved with any school or, heaven forbid, university.

Instead, the commission declassified thousands of documents, helped publish several important books and performed a good service to historians, some of whom played a prominent role in its work (for example, commission member Alexander Chubaryan is the director of Lebedeva’s Institute of General History and initiated the publishing of several books on the tragic years of 1939-1941, which were published in both Russia and Poland).

So much for all the doomsday predictions of the foreign media about the now-defunct commission.

I won’t be surprised if a similar story repeats itself now, unless the authors of the Magnitsky Act and the subsequent “counter-legislation” in the State Duma go too far in their unchecked fantasies, which do nothing but harm to Russia’s relations with the U.S. and possibly with the E.U. (if the latter opts for copy-cat tactics, blindly copying American legislation).

It should be noted that all the passed and proposed “anti-foreign” bills in Russian legislation on NGOs are not directed against foreign charities or any form of scientific or cultural cooperation. The law stipulates that only NGOs connected to politics (elections, media policy) will be effected. But there is no doubt already that the damage in bilateral relations will go beyond strictly political matters. Charity, culture and science will suffer too. And that is extremely unfortunate.

Who has read the American Foreign Agents’ Registration Act, a near replica of the NGO law?

Dmitry Babich is a political analyst with Voice of Russia and has appeared as a commentator for the BBC and other international media.