Kostroma: City on the Volga founded by Yury Dolgoruky 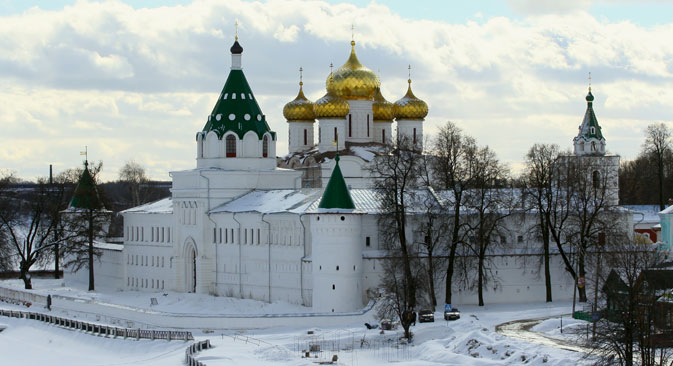 Located 300 kilometers (186 miles) northeast of Moscow, Kostroma is one of the most 'religious' cities of Russia.

The city has a population of 300,000 people and stands at the confluence of the Volga and Kostroma rivers. Local legend claims that the town is the home of the Snow Maiden, who is the granddaughter of the Russian Santa Claus, Grandfather Frost.

Visitors arriving in Kostroma after seeing the other cities on the “Golden Ring” tourist route are surprised to find that, instead of a town center made up of kremlin fortifications and a string of golden-domed churches, Kostroma’s historic center is based around its 19th-century market square and huge, columned, classical buildings.

Even so, Kostroma did have a kremlin fortress. It was built in the 15th century, on a hilly mound on the banks of the Volga River; but it was torn down in 1930, along with the Uspensky (Assumption) Cathedral that stood behind its defensive walls.

The site of the former kremlin is occupied today by the city park, along with a Lenin statue of unbelievably large proportions.

The best place to begin a sightseeing tour is at Susanin Square, which is named after local hero Ivan Susanin. Susanin went down in history for his self-sacrificing heroism. When invading Polish troops demanded to be shown the way, Susanin led them instead into the forest, where they all perished ‒ Susanin himself included.

It is easy to wander around Kostroma without a guide. Almost every site of historic interest in the town is marked with a square QR-code signboard.

Kostroma was a major trading town in the 17th-18th centuries, since a number of regional trade routes between Yaroslavl, Moscow, Vladimir and other cities bisect the town. This gave a substantial boost to the economic development of the town and its surrounding districts.

In the 18th century, the matter of replacing the wooden trading rows of the town’s market square with a stone complex was discussed. The Red Trading Rows were originally built in the shape of a closed rectangle, and the ground floor of the market was made up of a large columned gallery. Each market concessionaire had a space between two of the columns. The upper floor was the so-called office, while the basement housed the storerooms.

How to get there: There are several daily trains that run between Moscow and Kostroma. The journey takes seven hours and, on average, tickets cost around $52.

Where to stay: There are many private apartments available for rent at reasonable prices, as well as B&Bs and decent hotels. Prices do not differ greatly from those in Moscow, at around $50 per night for a twin room.

The Church of Our Saviour-in-the-Rows was built as part of the market square rows. It was one of Kostroma’s oldest churches; so when the new columned market square was built, the architects took special pains to include it within the new layout. Cheap items were sold in some rows housed in the courtyard of the Red Trading Rows ‒ a part of the market that was added later.

Facing the Red Trading Rows from Susanin Square, the tobacco and butter rows are to the left of them, while the flour rows are to the right; and behind them are the kvas rows (“kvas” is a fermented drink made from bread). The overall result is an entire market of 18th–19th century trading rows.

They fulfill the same function today, with shops and cafes in the rows now. Susanin Square is the center of the town, and the main streets and avenues of Kostroma’s city center radiate away from it.

Around the perimeter of the market square stand buildings which, like the trading rows, contribute to the town’s distinctive appearance. One of them is the fire tower, built in the 19th century in the classical style. It has six massive columns, with a watchtower on the roof that makes it look a bit like a lighthouse.

Nowadays, the fire tower houses the Kostroma State Historical, Architectural and Arts Museum, and the Center of Fire Prevention. There is another building on the opposite side of the market square called Borschov House, which now houses the city courthouse.

Salt settlement in the Kostroma forest

Walk beyond the butter rows to find the city park, which is laid out where Kostroma’s kremlin previously stood. Although there is nothing especially remarkable about the park itself, the gigantic statue of Lenin on its central boardwalk is not to be missed. It stands on a granite pedestal that had initially been put in place in 1913 for a monument to mark 300 years of the Romanov Dynasty.

The planned monument was supposed to stand 118 feet high and include bronze depictions of all 26 Romanov czars ‒ even Crown Prince Alexis, heir to the throne at the time. But the monument was never erected. After the Russian Revolution, the 20 bronze figures which had already been completed were sent to be melted down. However, the pedestal was too good to go to waste, so it was used to prop up a statue of the leader of the world’s proletariat.

“We call it the ‘shut-off valve’ here. Just take a look at its proportions – its hands are more than one-and-a-half times too large! There’s talk of getting rid of the thing. After all, this used to be Cathedral Square; it’s sacred ground, while Lenin is just waving his hands in the air here.

Probably next year the final decisions will be taken about where it can be relocated,” said Sergei, a student at Kostroma Technical University.

The huge white-walled fortress of the Holy Trinity Ipatievsky Monastery stands on the banks of the River Kostroma; the reflection of its onion domes in the flowing river leaves a lasting impression.

The monastery was built in the 14th century and was considered the cradle of the Romanov house. Each successive czar of this eminent dynasty, after coronation, made it their duty to visit the Ipatievsky Monastery with elaborate and expensive gifts.

The monastery now has a collection of the gifts bequeathed by the Romanov and Godunov royal families. Another display in the monastery features church treasures of the Kostroma region from the 17th-19th centuries.

Today, Kostroma is a major industrial center. Machine building and timber processing are being actively developed in the city. Kostroma was known for being a textile and trading center, and the city’s growth traditionally depended on the clothing industry. This history as a trading center is reflected in the city’s coat-of-arms, which bear the image of an old-style sailing frigate crossing the waves.