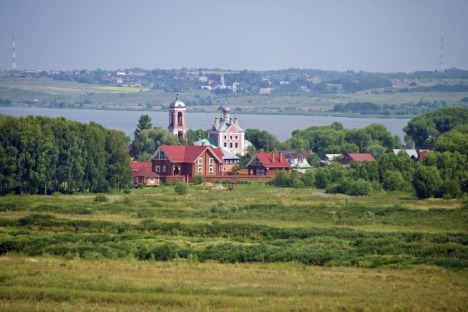 One of the lesser-known towns on the Golden Ring, Pereslavl-Zalessky is one of the most architecturally rich.

To the northeast of Moscow lies thehistoric path of pilgrims and traders, a route that extends past the great Holy Trinity Monastery at Sergiev Posad and then on to Rostov and Yaroslavl  on the Volga River.

Although less known, one of the most ancient settlements on this road has the weighty name of Pereslavl-Zalessky. Located near the shores of Lake Pleshcheyev, the town was established in 1152 by Yuri Dolgoruky, prince of the large territory of Rostov-Suzdal and the founder of Moscow.

Settlers from the medieval capital of Kiev had moved to the area since the turn of the 12th century, and the town’s name is thought to derive from the town of Pereyaslavl, near Kiev. The addition of “Zalessky” (“beyond the forests”) indicates that the new settlement lay within a forest zone in central Russia.

Yury spent most of his life in a quest for the princely throne in Kiev, and he died within a year of achieving that goal, in 1157. But much endured from his efforts and those of his son Andrei Bogoliusky in the Suzdal territory.

These accomplishments in Pereslavl Zalessky include one of the earliest cut stone churches in Russia, the Cathedral of the Transfiguration of the Savior. Although the cathedral lacks the harmony of proportions that characterizes later churches built by Yury Dolgoruky's sons in Vladimir and Bogoliubovo, its plan is finely calculated and demonstrates a skilful use of cut limestone as a building material.

Behind the cathedral are the remains of a high earthen rampart that was originally capped with a log wall. The rampart is one of the oldest and best preserved in Russia.

Pereslavl-Zalessky has had an extraordinary number of monastic institutions – as many as 12 were located in the immediate area during the mid-18th century. In part this was a reflection of the town’s role as a center of early missionary activity at a time when much of the Rostov territory had only nominally accepted Christianity. The number of monasteries was also due to the town’s position on a major pilgrimage route used not only by humble believers but also by the grand princes of Muscovy.

Five monasteries still have a major presence in Pereslavl-Zalessky. The oldest of these is the Monastery of Saint Nicetas (Nikita) the Martyr, on the northern edge of the settlement. Although founded in the early 12th century, the monastery’s major patron was Ivan IV (the Terrible), who generously supported it in the latter part of the 16th century.

Sacked by the Poles in 1611 during the dynastic crisis known as the Time of Troubles, the monastery and its 16th-century fortress walls were soon restored with the support of the first Romanov tsar, Mikhail Fyodorovich. Severely damaged during the Soviet era, the monastery has now been impressively restored, including the Cathedral of Saint Nicetas (1560s) and the 17th-century refectory Church of the Annunciation.

The next important institution was the Goritsky-Dormition Monastery, founded in the early 14th century by Moscow prince Ivan Kalita (1283-1341?). Destroyed by the Tatars in 1382, the wooden monastery was quickly rebuilt and became a major center of religious activity. In the late 15th and 16th centuries, the monastery developed close ties with grand princes Basil III and Ivan IV.

Its accession to magnificence occurred in the middle of the 18th century during the reign of Empress Elizabeth. In 1744 it became the center of a powerful bishopric, and its main church, the Cathedral of the Dormition of the Mother of God, was rebuilt in the baroque style with a magnificent rococo interior characteristic of Elizabeth’s reign.

The monastery now serves primarily as a museum and is worth a visit not only for its displays of local history but also for superb views of Lake Pleshcheyev and the town from a tower on its north wall.

Down the hill from the Goritsky Monastery and visible from its walls is the Monastery of Saint Nicholas, with its bright golden domes. The monastery, which was converted to a convent in 1898, was  founded in the mid-14th century by monk from Goritsky Monastery who was later canonized as St. Dmitry Prilutsky, renowned for his work in territory of Vologda.

The earliest surviving churches date from the 1740s: the Gate Church of Sts. Peter and Paul and the refectory and Church of the Annunciation. Vandalized in the Soviet era, the convent completed a new Cathedral of Saint Nicholas in 2003.

At the beginning of the 16th century another monk from Goritsky Monastery, Daniil, founded the Trinity-Danilov Monastery. Soon thereafter this institution benefited from the patronage of Basil III, who in 1530-32 commissioned a large church as a gratitude offering for the birth of a long-awaited son, Ivan IV. Despite changes to the roofline, the structure of the Trinity Cathedral is largely intact.

During the 17th century the cathedral gained a large bell tower (1689) and an ensemble of frescoes painted in 1662-1668 by two masters from Kostroma, Gurii Nikitin and Sila Savin, who were involved in the repainting of the frescoes at the Archangel Michael Cathedral in Moscow. After decades of neglect, the monastery is now being restored.

The fifth major monastic institution is the Convent of St. Theodore Stratilates, reportedly founded in the 15th century. Its main church, dedicated to the martyr Theodore Stratilates, was completed in 1557 with support from Ivan IV to commemorate the birth of his son Theodor (Fyodor). The restored convent has other churches from the 17th and 18th centuries, as well as two 17th-century cloisters undergoing careful restoration.

Pereslavl-Zalessky is also dotted with parish churches from the 16th to the 19th centuries. One of the most interesting is the Church of Metropolitan Peter, built in 1585 to honor the early 14th-century metropolitan of the Orthodox Church who provided significant support to the budding Muscovite principality. Its “tent” tower is a distinctive landmark in the center of town.

For a brief period in the late 17th century, Pereslavl was again at the center of attention in the Muscovite state. In July 1688, the young Peter I (the Great) caught his first site of the smooth expanse of Lake Pleshcheyev and decided that it would be an ideal place to begin his quest to create a Russian naval fleet.

For the next five years, western-style boats were constructed on its shores and Peter tried his hand at maneuvering them. In 1693, however, he moved to broader vistas via the White Sea port of Arkhangelsk. This brief but significant episode in Peter’s life is commemorated in a museum near the lake at the village of Veskovo.

The 18th and 19th centuries witnessed slow, almost placid growth in this modest regional market town with its many churches. Pereslavl was even bypassed by railroad construction that linked Rostov and Yaroslavl to Moscow in the late 19th century. The town’s main source of work at the turn of the 20th century was textile production.

Today Pereslavl-Zalessky is a regional administrative center of some 40,000 residents, supported in part by light industry. Despite the lack of a passenger rail connection, its location on a major highway has facilitated the growth of tourism and resort development. Indeed, the historic center would benefit from the construction of a bypass road to relieve the current congested flow of intercity traffic.

With proper planning and development, the natural beauty and rich architectural heritage of Pereslavl-Zalessky will maintain a prominent place in Russia’s Golden Ring of historic towns.