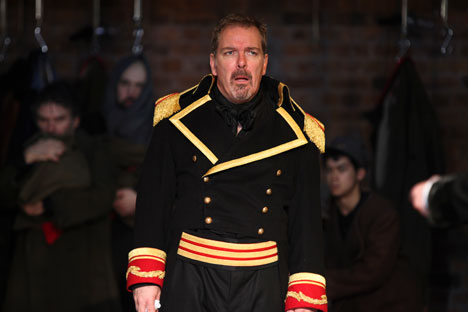 The ghosts of Shakespeare and Russian history haunt the UK premiere of Alexander Pushkin’s classic play.

The Swan Theatre in Stratford-upon-Avon, with its Shakespearean echoes and its blend of history and modernity, is the perfect venue for “Boris Godunov.”The wooden auditorium was built to resemble a galleried Elizabethan theatre, but the intimate space lends itself to experimental drama.

The opening scene of this “Boris Godunov” shows the new czar dressed in a suit, wiping his bloody hands on a handkerchief.

Godunov, one of many plausible noblemen, stepped into the power vacuum caused by the death of Ivan the Terrible’s son Fyodor in 1598; the murder of Fyodor’s younger brother, little Prince Dmitry, meant there were no surviving direct heirs of the Rurikid dynasty, which had ruled Russia for more than seven centuries.

Behind Godunov, a cavalcade of figures from Russian history dances and cartwheels out through the audience. Using the costumes hanging above the bare thrust stage – from gold embroidered 16th-century robes and Napoleonic tailcoats to modern leather jackets – the cast gradually transform themselves as the play progresses.

The action begins in Godunov’s era, as two noblemen plot (like Brutus and Cassius against Julius Caesar) to overthrow the czar. By the end of the play, Gen. Basmanov is wearing the classic blue camouflage of the modern Russian army’s winter uniform.

This chronological progression highlights the parallels between Russia’s varied cycles of repression, from Godunov to Nicholas I (who censored Pushkin), through Stalin to the present day.

Pushkin’s political play is generally only known outside of Russia through Mussorgsky’s opera. There have been Russian-language and very rare amateur productions of the drama, but – as director Michael Boyd said in a recent interview – it is “extraordinary” that this “masterpiece by the founding father of Russian literature has not yet been professionally performed in English.”

Boyd draws parallels between “Godunov” and plays like “Richard III” and “Macbeth,” which inspired Pushkin. Both playwrights use historical episodes as a way of commenting on their own eras without getting into trouble.

The director also makes clear that he sees Godunov as highly relevant today: “Boris found his way to power – quite like Vladimir Putin – through the secret service … his uncle was head of the ‘oprichniki,’ the notorious KGB of Ivan the Terrible.”

There are several photos of the imprisoned protest group, Pussy Riot, in the program as well; and certainly the cozy relationship between church and state, highlighted by the band, is another of the play’s relevant themes.

The patriarch’s religious manipulation of the masses shores up the corrupt regime, but, at the same time, the Rev. Nikolka Pimen is determined to write the truth and expose the czar as a murderer.

Grigory, a frustrated, energetic young monk from Pimen’s monastery, claims to be Prince Dmitry, and he meets his match in the sexy and cynical Polish princess, Marina. The charismatic pretender, powerfully played by Gethin Anthony, tries to harness the fickle affections of the “mindless rabble.”

Like Shakespeare’s crowds, “the people” in Pushkin’s work are gullible and easily swayed, with an added dimension of fear and paranoia; but they can withhold approval as well as grant it.

Where they had forced themselves to weep and cheer for Czar Boris, Pushkin’s famous closing stage direction reads: “The people are silent.” The announcement of the new Czar Dmitry is followed by an uncomfortable lack of response.

Boyd wants to provoke discomfort. He plays up the comic elements, subtitling the play as “a comedy about tyranny,” for satirical effect. An entertaining double act performed by two vodka-downing, doggerel-spouting monks is interrupted by police with guns.

The director sees this ironic mix of styles as yet another overlap with Shakespeare: a disturbing car crash of high tragedy and low comedy that was ahead of its time. Pushkin’s techniques became fully acceptable only after modernism had “slammed contrary perspectives together quite violently.”

Pushkin was ground-breaking in his attempts to wrench drama back to its popular origins, away from the genteel stranglehold of court patronage. He wrote in a literary essay: “In Shakespeare’s tragedies, if the heroes speak like stable boys, it does not strike us as strange.”

The monks, who deride “the czar’s security mob” while knocking back shots of vodka, ring as true as Godunov’s wrestling with his torturing guilt (like Claudius in “Hamlet”):

“There can be no peace for human beings/ Among the raging troubles of this world./ No peace, except, perhaps, through conscience.”

For Lloyd Hutchinson’s choleric, Ulster-accented czar, haunted by visions of a boy with a slit throat, guilt produces violent and believable physical symptoms.

With its direct but lyrical language, great acting from two very watchable leads, and a strong ensemble cast, Boyd’s “Boris Godunov” is a timeless exploration of the price of power. Pushkin’s play may not be perfect, but it has plenty to say about human nature, truth and tyranny.