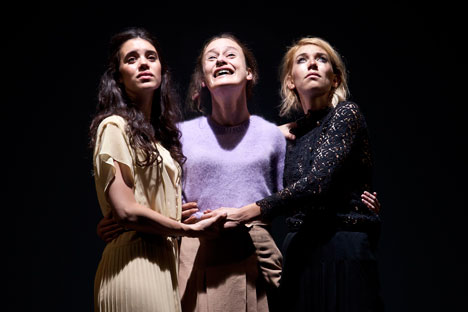 Dark comedy and psychological breakdown are never far from the surface in Benedict Andrews’ bleak vision of Chekhov’s masterpiece.

Three well-educated sisters live in a provincial Russian town. Frustrated by joyless marriages or demanding jobs, they lament the passing of time and long for better lives in Moscow. This production highlights savage humor and individual intensity, but leaves the characters deliberately distanced from each other, making only fleeting emotional connections. The perennial existential questions about the meaning of life and the themes of human isolation and mortality are as relevant and universal as ever. Chekhov’s major plays were experiments in a new kind of psychological theater, which influenced everything after it.

The play opens on the anniversary of their father’s death, which is also the birthday of Irina, the youngest. Olga, the dutiful older sister and schoolteacher, complains of headaches and “youth draining out of me drop by drop.” In this production, Masha, the beautiful middle sister, who has been smoking and reading at the front of the stage, suddenly starts to sing David Bowie’s “Golden Years”: “Don't let me hear you say life’s taking you nowhere, angel” and puts on dark glasses to hide her tears.

It is unusual to see a modern-dress Chekhov in London. Productions may not always stick rigorously to the plays’ original 1890s/1900s settings, but the lure of linen jackets and long dresses often proves irresistible. The Young Vic’s brand new “Three Sisters” abandons the traditional grammar of Chekhovian parasols and antique furniture in favor of tattoos and tracksuits, handbags and high heels. Electric samovars and shot glasses are still in evidence, just as they are (sometimes) in modern Russia, but the final Lermontov-style duel sits uneasily in a world of iphones and digital cameras.

The props and costumes are not the only things that have been modernized. Andrews’ rewriting of the translation updates Chekhov’s language to convey its often pessimistic message. One of the soldiers jokes, when Olga starts to cry, “Why did God give women orgasms? So they’ve got something else to moan about.” The three sisters’ brother Andrey asks at the end of the play: “Why – when we’ve only just begun to live – do we turn into boring, grey, banal, apathetic, useless, miserable sacks of shit – why?” Our children, he complains, “end up the same as their god forsaken, inter-fucking-changeable, zombie mothers and fathers.”

In one crucial scene, the soldiers try to imagine the future and one of them suggests (in Chekhov’s original) flying in balloons, new jackets and perhaps the development of a sixth sense. In Andrews’ version, this becomes “quantum teleportation” and “special climate intelligent clothes, probably with bio-interfaces to allow direct thought communication,” underlining the basic idea that “life itself will be exactly the same as today – difficult, mysterious and full of happiness.”

Vershinin, the philosophical lieutenant colonel whose affair with Masha forms the play’s emotional kernel, insists, conversely, that happiness is a mirage, the preserve of future generations in a “better world.” William Houston, playing Vershinin, has been having a one-man Chekhov festival recently, having starred as a sympathetic Astrov in the Print Room’s “Uncle Vanya” earlier this year.

Vanessa Kirby (Masha) said of the role, in a recent interview with the Telegraph, “She is the person most invested in life that I’ve ever played. She wants so much, and has so much to give. I love her temper as well.” She described Benedict’s production as “totally contemporary, set in a metaphorical Russia.”

Kirby’s interpretation of Masha, a role that Chekhov originally wrote for his wife Olga Knipper, is one of the most compelling performances among a strong cast. Like many of the characters, male and female, she lives on the verge of tears, but in Masha’s case there is a psychotic edge. Still dressed in lacy black for her father, she kisses Vershinin with a desperate intensity, feeling she is forced to “snatch at happiness”; she drinks heavily, dances wildly and is – finally - utterly distraught when the regiment leaves. The sisters are left standing on a large heap of fresh earth that is one of the stranger features of the minimalist set by celebrated German designer, Johannes Schütz.

Most plays at the Young Vic, including last year’s delightful “Government Inspector,” are kept firmly behind the proscenium arch. For “Three Sisters,” Schütz has demolished rows of seats and created a versatile thrust stage from dozens of identical, square tables. The tables become increasingly disordered and then gradually disappear, leaving the bare stage with only splashes of vodka and fragments of heirloom porcelain to suggest the emotional turmoil it has seen.

Andrews uncompromising work as a director has inspired both adulation and criticism. He staged an earlier version of “Three Sisters” in his native Australia, where, he told the Sydney Morning Herald, "one gentleman said my production of “Three Sisters” was like pouring a bottle of fine malt whiskey into a vat of Coca-Cola." Andrews said he does not set out to shock or “disrespect the text”: "I would rather my work polarized audiences than anaesthetized them. My theater plays to a lively, engaged audience. There is no room for nostalgia."

“Three Sisters” is on at the Young Vic until October 13.