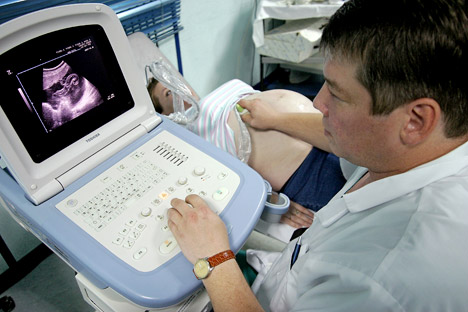 In Moscow there are currently around 2,500 couples on the waiting list for IVF treatment in 2013, according to experts. Source: RIA Novosti / Sergey Venyavsky

The authorities will finance one round of in vitro fertilization (IVF) treatment for each of the 2,500 Moscow families awaiting the procedure in 2013.

Starting in 2013, in vitro fertilization (IVF) patients will receive free treatment as part of the basic compulsory health insurance program (CHI). Izvestia was informed of this decision by Moscow’s deputy mayor for social issues, Leonid Pechatnikov. In this way, Muscovites will be able to resolve their fertility problems for free, with the option of undergoing treatment in commercial clinics that are covered by Moscow’s CHI system.

The vice mayor was not able to specify the exact amount of budgetary funds that would be put toward IVF treatment. He says that treatments will only be partially financed by the fund, and some of the cost will be covered by the Moscow budget.

Oksana Starkova, head of the Doctor Medical Center and specialist in IVF treatment, notes that the waiting time for these treatments will be significantly reduced, if CHI finances IVF and if private companies are given access to these funds.

“Muscovites will be able to choose which clinic to go to for IVF treatment and which doctor they want to put their trust in,” said Starkova.

She also says that, at the moment, are only two state-run healthcare clinics offering free IVF treatment in Moscow as part of the Healthcare Department’s program: the Academician V.I. Kulakov Research Center of Obstetrics, Gynecology and Perinatology under the Ministry of Health and Social Development of Russia; and also the Family Planning and Reproduction Center under the Moscow Healthcare Department.

The main doctor at the latter institution is actually the capital’s main OB/GYN, Mark Kurtser. In October 2012, his Mother and Child chain of clinics was floated on the stock exchange with an IPO of $900 million.

As Izvestia was informed by Andrei Akopyan, the general director of the Republican Center for Human Reproduction, the private clinics offering IVF are still not included in Moscow’s CHI system.

“This is the aim, negotiations are being held; but it is very hard to break into this market,” said Akopyan.

Out of Moscow’s 660 medical institutions covered by CHI, there are only a few commercial ones; however, these are mainly multidisciplinary, dental and ophthalmologic clinics.

According to medical lawyer Alexei Tikhomirov, the main problem with the plans to finance IVF from budgetary funds is the fact that families will only be given one attempt.

“However, only a small number of women get pregnant after the first round of treatment, and usually families have to go through two or often three attempts,” said Tikhomirov. “This is why families will still end up paying for expensive treatment out of their own pocket.

At the same time, according to Pechatnikov, the Moscow government is still not planning to simplify the procedure for receiving the IVF quota from the budget. The strict procedure was worked out back in 2007. Only families who have been officially registered and who do not have any children of their own can qualify for financial support for treatment, in both state-run and private clinics.

The woman needs to be between 22 and 38 years of age, and she must have been diagnosed as having tubal infertility. If a couple are not able to conceive for other reasons, they can only qualify for state support if the problem continues for more than two years and cannot be resolved by other means (by way of operation, for example).

Oksana Starkova drew attention to the fact that, in the U.S. and Israel, couples are given funding for IVF even if they want to have a second or third child.

“Bearing in mind the demographic situation in Russia, we also need to do something about this,” said Starkova. “The problem of infertility, especially in large cities, is becoming more and more pronounced. Both economic and ecological factors play a role in this.”

Starkova thinks that Moscow doctors could make it easier for families to qualify for funding, but only if they increase the overall funding that is currently available from the budget.