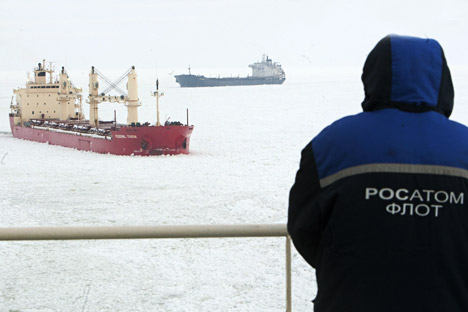 Many countries are eyeing the Arctic with interest. The region is where those in dire need of new energy resources will soon go to exploit the Earth's fabulously rich northern extremity. As such, icebreakers will be a vital tool in the future production and transportation of energy resources from the North.

Judging by the scale of Russia's icebreaker program, by 2017, the Arctic will be under new management. Under a contract between Russia’s state-owned Atomflot and the Baltic Shipyard in St. Petersburg, construction of the largest and most powerful icebreaker in the world will begin in November 2013.

One of the main advantages of the new icebreaker will be its versatility. Despite the huge size (more than 557 feet long and 111 feet wide), the ship will be able to ply the mouths of Siberia's rivers and the Northern Sea Route (NSR) equally well. As the deputy director of Atomflot, Konstantin Knyazevsky, said in a recent interview with Voice of Russia, such capability will come from the new design.

Arctech Helsinki Shipyard specializes in the construction of ice-class vessels, such as icebreakers and special-purpose ships. It is a joint venture between STX Finland Oy and Russia's USC. An agreement to set up the joint venture was signed in December 2010.

“We currently operate two icebreakers with a shallow draft,” Knyazevsky said. “We call them small-draft icebreakers: they are the ‘Taimyr’ and the ‘Vaigach’; plus two-reactor icebreakers that operate along the NSR in open sea, such as the ‘Arctic.’ They have a draft of up to 11 meters [36 feet]. And the versatility of the new vessel will allow it to work as an icebreaker in both shallow and deep waters. Liquid ballast means the draft can be altered within a wide range.”

“The icebreaker will be equipped with a RITM-200 reactor unit, which will significantly increase the safety level,” said nuclear scientist Igor Ostretsov.

"Russia is essentially a monopoly in the field of nuclear transport systems. The reactors have been improved and employ new technologies; there is no doubt that the reactor unit inside this icebreaker represents a marked improvement in terms of safety,” Ostretsov said.

The main task of the icebreaker is to guide large-tonnage vessels along the NSR. Moreover, the vessel will take part in rescue missions in the Arctic basin and assist in making oil production facilities operational. However, according to Ostretsov, there is another important task. “Current research is primarily directed at the Arctic continental shelf. One of the main tasks is to prove Russia's pre-eminence in the region, both scientifically and practically,” he said.

Meanwhile, Russia is looking to engage foreign companies in its icebreaker program. At the end of December, a contract was signed between Russia's Federal Agency of Sea and River Transport and Finland's Arctech Helsinki Shipyard to build the Project 21900M icebreaker.

The Finns will manufacture and assemble the hull, install and fine-tune the onboard equipment, lower the vessel into the water, conduct tests, and hand the ship over to the customer.

"There is no doubt that this order represents an important step in the development of cooperation between Vyborg Shipyard and Arctech Helsinki Shipyard. Furthermore, the construction of such a vessel gives both companies an opportunity to reassert themselves as capable of producing top-of-the-range icebreakers," said Alexander Solovyov, CEO of Vyborg Shipyard.

"This order is very important for Arctech Helsinki. It will utilize a good deal of shipyard capacity for the next two years," said Esko Mustamäki, managing director of Arctech Helsinki Shipyard.

The icebreaker will be able to grind through ice up to 1.5 meters (5 feet). Its main purpose is to independently guide large-tonnage vessels, as well as to tow, firefight on floating platforms and other facilities, respond to SOS calls, and transport payloads. Construction is already underway; work on the ship frame began in the last week of 2012.

The ship is the third of its kind to be built by Vyborg Shipyard. Work on the first two began on Oct. 17 and Dec. 12 in 2012. The delivery deadlines for the two vessels are May and October 2015.