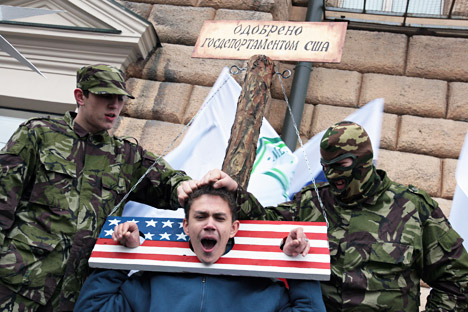 The Magnitsky Act and the Dima Yakovlev Law indicate that U.S.-Russian relations have been worsening. This sparks a new round of anti-American rhetoric in Russian society.

Recent developments in U.S.-Russian relations seem to have sparked a new round of anti-American rhetoric in Russian society.

The U.S. adopted the Magnitsky bill, establishing a list of people in Russia who are allegedly connected with the 2009 death of a young lawyer in a Russian prison and with violations of human rights in general. Russia saw the legislation as interference in its domestic affairs.

The government aimed to retaliate by adopting a similar list and even forbidding the adoption of Russian orphans by U.S. parents. One aspect that attracted many observers’ attention was that, according to FOM polls, over 50 percent of Russians supported the adoption initiative. What stands behind the anti-Americanism in Russia?

The Magnitsky list was not very well understood by most Russians, either. According to VTsIOM, only 10 percent have a very basic understanding of what the list means. Eighty-six percent of respondents had either never heard about it or had heard the term but did not know what it referred to.

Yet, after a pollster’s explanation, 29 percent believed that the real reason behind the Magnitsky list was to exercise pressure on Russia. Nineteen percent of respondents said that the true reasons behind the passing of the legislation were probably disguised, and 12 percent thought that the U.S. is provoking a conflict with Russia. The widespread public distrust of the U.S. is an obvious conclusion to be derived from the polls.

According to Marina Lebedeva, chair of the World Politics Department of Moscow State University of International Relations, the Magnitsky list, to a large extent, can be explained by the history of U.S.-Russian relations.

“The U.S. and Russia share the Cold War legacy, and the two nations were often compared in terms of their military and economic potential," she said. "The U.S. has remained a superpower, while Russia has not. Since the economic cooperation is not that significant for both sides, the ideological component dominates the relationship.”

Lack of trust on the public level is reinforced by media players and politicians who feel free to gain popularity at the expense of the U.S. as an alleged archrival.

Matthew Baum, Harvard Kennedy School professor of global communications, says the American public, for the most part, is interested in domestic affairs and has very limited interest in foreign policy.

“People get information from the media, and Russia gets relatively little attention given its overall political importance,” said Baum.

A February 2012 U.S. Gallup poll showed that only 2 percent of Americans see Russia as an enemy, while 1 percent believe that the U.S. itself is the nation’s greatest enemy.

Paradoxically, the American public’s lack of interest in Russian affairs also contributes to anti-Americanism. As some American politicians who wished to remain anonymous explain, although there are three million U.S. citizens of Russian origin, they are not consolidated and cannot impact any national election’s outcome.

Other ethnic communities are often more concentrated and electorally impactful when they are located in battleground states. Large parts of campaign budgets and candidates’ time is spent on these constituencies, and politicians often have to criticize Russia to win voters from other Eastern European backgrounds.

Another Russian poll organization, the Levada Center, showed that Russians are cautious about most other nations they have to interact with – not only the United States. Georgia tops the list of countries. In 2012, 41 percent believed Georgia is unfriendly toward Russia (62 percent did in 2009), while the U.S. was second on the list with 35 percent of skeptics wary of it. Russia’s Western neighbors of Latvia, Lithuania and Estonia are also very close to the top of the list.

On a similar note, Russians do not believe their country has a lot of allies. According to the Levada Center, only Belarus and Kazakhstan were mentioned as friends by over 25 percent respondents, with Germany capturing 17 percent and third place.

That lack of trust of the outside world can be partially explained by history and geography. Russia has had territorial disputes or conflicts with almost all of its neighbors. Being surrounded by countries that are seen as potential opponents certainly does not create an atmosphere of trust.

Russian anti-Americanism, however, is not that different from many other countries’ attitudes. According to the BBC Country Rating Poll 2012, only 48 percent of Canadians and 38 percent of Mexicans viewed the influence of the U.S. in the world as positive. That came as an improvement, as negative attitudes dominated in both countries in the year before.

Although the global average across most countries was mainly positive, negative views were more popular in China, Egypt, Germany, Pakistan and some other large countries.

According to Baum, although U.S. foreign policy actions clearly account, in part, for anti-Americanism, the phenomenon is primarily explained by American dominance in world politics.

“As soon as another country starts exercising its influence regionally or globally, it starts facing similar hostile attitudes, as China does now in East Asia,” said Baum.

The rapidness of changes in public attitudes shows that anti-Americanism is, in most cases, not something that has a deep, long-term impact.

Fluctuations in national attitudes can be rather sharp. American political scientist Joseph Nye gives the example of Indonesia: the attitude of its population was 61 percent favorable to the U.S. in 2002; it dropped to 15 percent in 2003, after the invasion in Iraq, and then it rose again to 38 percent in 2005, after the U.S.-led tsunami relief operation in South East Asia.

“Russian attitudes are also a function of the current state of U.S.-Russia relations and U.S. policies,” said Marina Lebedeva. “When they are unfavorable toward Russia, they are used by politicians in domestic politics and influential media.”