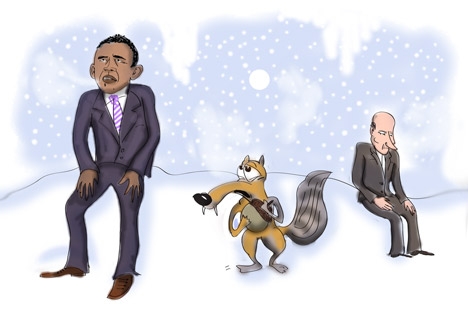 In December 2012, Kommersant daily reported that Russian President Vladimir Putin was presented with a new concept of the foreign policy of the Russian Federation, which had been prepared at his request by the Ministry of Foreign Affairs. The document, which is yet to be made public, is expected to lay out Russia’s international agenda for Putin’s third presidential term.

What stands behind anti-Americanism in Russia?

According to Kommersant, Russia’s major foreign policy objective will be economic and political integration in the post-Soviet space, with the Eurasian Union proposed by Putin a few months ago serving as the principal “glue” for such integration.

Second on the list of priorities was Russia’s relations with the European Union. Russia’s relations with the United States came third. As reportedly stated in the concept, Russia will be insisting that the U.S. provided “formal legal guarantees that the planned missile defense system will not be targeted against Russian nuclear defenses” and that the U.S. “not meddle into domestic affairs of other countries.”

It is fair to say that U.S.-Russia relations enter 2013 in a state of deep uncertainty.

On the one hand, the re-election of Barack Obama to the second term as U.S. president would seem to promise a healthy dose of predictability in the bilateral relationship. Russia too was visibly pleased with the news that the all-important position of U.S. Secretary of State has been offered to Sen. John Kerry (Democrat-Massachusetts), a seasoned foreign policy expert and someone Moscow thinks it can do business with. Although Kerry still faces Senate hearings, he is expected to be confirmed.

On the other hand, the end of 2012 was marred by U.S. Congress’ passing the Magnitsky Act, an amendment to a trade law that bans entry to the U.S. and freezes financial assets there of Russian officials suspected in human rights violations.

In response to the Magnitsky Act, which Moscow considers blatantly anti-Russian, Russia’s parliament promptly passed the Federal Law 272, named after a Russian toddler, Dima Yakovlev, who was adopted by American parents and later died in a tragic accident. At its core, the Dima Yakovlev law mirrors the Magnitsky Act by banning entry to Russia of Americans responsible for the violation of human rights of Russian citizens.

Yet the Russian lawmakers added two provisions that made the law much more than a purely “symmetric” retaliation. First, they made illegal U.S. funding of Russian NGOs allegedly engaged in “political activities.” Second, in a highly controversial move, they put immediate stop to the adoption of Russian orphans by American families.

There is no doubt that both laws will have a chilling effect on U.S.-Russia relations in 2013 and beyond. Yet there is one significant difference between the two pieces of legislation. The adoption of the of the Magnitsky Act reflects the presence of a strong anti-Russian lobby in U.S. Congress eager to have some type of “leverage” against Russia now that the notorious Jackson-Vanik amendment has been finally repealed. At the same time, the White House opposes the Magnitsky Act and has enough tools at its disposal to mitigate its consequences.

In contrast, the Dima Yakovlev law has full support at every level of Russian government: it was reportedly initiated in the presidential administration (deputy head of the administration Vladislav Volodin was named as the principal driving force behind the law) and it was backed by all political forces represented in the State Duma and Federation Council. Characteristically, Putin expressed his support for the bill well before he saw it.

The adoption of Federal Law 272 therefore serves as an unfortunate indication that the anti-American campaign initiated by Putin a year ago was not meant to be a short-term election tool. In fact, anti-Americanism is rapidly becoming the mainstream of Russia’s foreign policy discourse.

Having finally recognized the amount of damage Putin’s return to the Kremlin has caused to Russia’s reputation in the world, Russian political elites have concluded that they had nothing to gain from improvement in U.S.-Russia relations. Rather, they seem to believe that the continued propagation of the “enemy at the gates” image will better serve their needs by slowing down the erosion of public support for the regime.

Nor could the Kremlin miss the fact that its domestic critics by and large supported the Magnitsky Act and opposed the Dima Yakovlev law. This gives the Kremlin an additional reason to toughen Russia’s stance vis-à-vis the United States: the worse Russia’s relations with the U.S., the easier it for the Kremlin to paint the opposition as “paid foreign agents.”

An Ice Age in U.S.-Russia relations might seem as a small price for the Kremlin to pay for maintaining the proverbial stability it is so keen about. There is, however, a profound danger in this approach. The “bunker mentality” characterizing Moscow’s current attitude toward Washington may rapidly spread, as a metastasis, to other aspects of Russia’s foreign policy. Should this happen, no single objective articulated in the new foreign policy concept will be achieved.