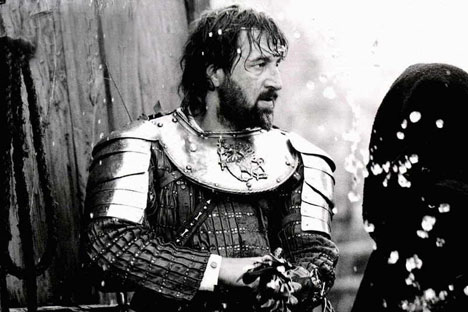 Russian actor Leonid Yarmolnik in “Hard to be a God” by Aleksei German. Source: kinopoisk.ru

2013’s cultural unveilings in Russia include new premieres at the Bolshoi Theatre, a new stage at the Mariinsky Theatre in St. Petersburg, music festivals, and an IMAX blockbuster about the Battle of Stalingrad.

The finest theatrical troupes are gathering in Moscow and, for the guests of some festivals and other events, visas may not even be required.

Aleksei German, the director of the legendary “Trial on the Road” and the gloomy “Khrustalyov, My Car!” has already been filming “Hard to be a God” for two decades now – the screen version of a cult Soviet-era sci-fi novel by the Strugatsky Brothers.

It is the story of an earthling (or scientific observer) who ends up in a feudal society on another planet. On the planet, the earthling gradually loses his ability to remain neutral, along with his human appearance. German promised the movie would appear in 2012, but he became preoccupied with illness and sound editing. A few hand-picked Russian critics have seen a draft edit, and stills have turned up on websites – judging from these, audiences are in for the most wretched, bloodthirsty and obscurantist Middle Ages in the history of cinema.

2. “Stalingrad” – a film from Fyodor Bondarchuk

Fyodor Bondarchuk – a seasoned, successful director and son of the legendary director of “War and Peace,” Sergei Bondarchuk – brings out his new film “Stalingrad” in 2013. It is a tale of love, against the background of one of the most appalling conflicts in humanity’s history. The movie’s budget ($30 million dollars) is a significant amount in the Russian filmmaking industry and went toward financing versions of the movie shot simultaneously in 2-D, 3-D, and IMAX. Bondarchuk offers audiences the hope of a terrifying and poignant film about one the most dreadful and infamous moments of WWII.

Rachmaninoff is widely considered one of the finest pianists of his day and, as a composer, one of the last great representatives of Romanticism in Russian classical music. Source: RIA Novosti.

The 140th anniversary of Russian composer Sergei Rachmaninoff will be marked with concerts in the Tchaikovsky Concert Hall in Moscow on April 1 and April 2, 2013. The Svetlanov State Symphony Orchestra, along with pianist Denis Matsuev, will be playing all of Rachmaninoff’s piano concertos over two days. The concerts will be conducted by the famous American conductor Leonard Slatkin.

The Moscow Easter Festival is an annual event held on the dates of the Orthodox Easter, which fall in late-April this year. It is an event pioneered and curated by Valery Gergiev, the principal conductor of the Mariinsky Theatre in St. Petersburg; it has quickly become one of the centerpieces of the classical music scene in Moscow.

Although the program remains under wraps, listeners can be certain of a grand, main symphonic repertoire, along with many other events to see and hear. The festival is famed for its choral performances, children’s performances, and “ringing week” – a separate sub-festival of bell-ringing, with ringers performing on traditional Russian church bells.

During this week, all visitors need do is walk through Moscow’s lanes, where the striking chimes of bells of different churches will surround them at every side.

5. Inauguration of the new stage of the Mariinsky Theatre

St. Petersburg’s main opera theatre will acquire a new stage in May. By fall 2013, it will be staging some of the most complex and spectacular productions in the world – primarily the operatic blockbusters of Richard Wagner. Construction work has gone on for several years, with top architects vying to win the bid.

Russian dozen: New musical talent that made its debut in the outgoing year

The theatre’s artistic director, Valery Gergiev, actively advocated the project plans that were submitted by Erik Moss. However, these plans were not well-received by the St. Petersburg’s community, as many did not want such an overtly contemporary building located in the center of the museum city.

The design competition in 2003 was won by designs submitted by Dominique Perrault, but these were also later blocked: it was explained that the plans failed to account sufficiently for water supply, ventilation and sanitation. The most recently held competition in 2009 was won by the firm Diamond & Schmitt Architects.

Vladimir Medinsky, Russia’s culture minister, is very happy with the building. “It’s going to be the best theatre building in the world!” Medinsky tweeted.

6. Invasion, Kubana, the Creation of the World, and the Afisha Picnic

Afisha Picnic 2012 held in the late July gathered the most progressive and stylish Moscow youngsters in one of the most ancient city-parks. Source: Daria Donina.

Russia’s open-air rock festivals run all summer long. This year, “Creation of the World” (the enormous world music festival) moves from Perm to the city of Kazan, where it will run in alongside the Universiade (the international student games).“Nashestvie” (“Invasion”) will take place, as usual, at Zavidovo in Tver Region, on the banks of the Volga. This is a festival played mainly by Russian bands, being one of Russia’s main open-air events to run over several days.

“Kubana” (the nickname for the region on the Black Sea coast) will be welcoming its festival headliners, Guano Apes. The event is the most cutting-edge of Russia’s large-scale festivals, staged by the Black Sea coast in Krasnodar Region. The pun is that Krasnodar Region is also known as “Kuban” in Russian – so it’s Cuba that is the interloper here.

On Jul. 13, at the grounds of the Kolomenskoe historic mansion in Moscow, the “Afisha Picnic” is set to take place. The festival is organized by Moscow’s leading listings magazine, Afisha. The Picnic is well-known for presenting high-end pop, and Blur are its Brit-pop headliners this year. One unusual aspect of this gig is that it is a completely dry event – not even beer is permitted – so audiences will be savoring the kings of classic Brit-pop with sober heads.

7. The Tsar’s Bride – opera production at the Bolshoi Theatre

The Bolshoi Theatre will be presenting a production of Rimsky-Korsakov’s opera “The Tsar’s Bride” in the manner in which it was staged during the 1960s. In these modern times, it is normal for advanced opera directors to stage fashionable, updated productions; yet these modern renditions often provoke extreme dislike from conservative-minded opera audiences.

The Bolshoi Theatre has taken a step in favor of aggrieved audiences by reviving its legacy production of the opera: lavish costumes and traditional stagecraft will put the “grand” back into “grand opera.” Israeli director Julia Pevzner, well known for her work in the United States and Europe, comes in to revive the production, and the Bolshoi Theatre’s music director, Vassily Sinaisky, supervises in the pit.