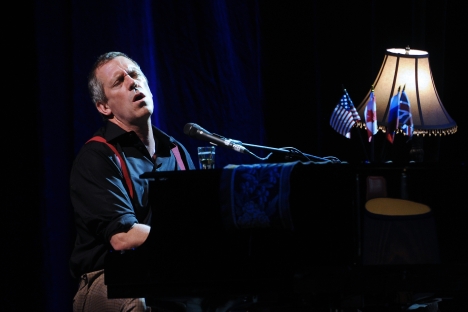 Pussy Riot and Madonna, Cossacks and Hugh Laurie's visit to Moscow, the "Innocence of Muslims" ban and the Chapman Brothers' exhibition in Hermitage – 2012 was a tough year, but at same time very interesting.

Hugh Laurie appeared in both Moscow and St. Petersburg on Jun. 25 with his blues show. Tickets sold out in just a few days, and it turned out to be one of the best and most popular concerts of the year. Laurie downed a shot glass of vodka onstage, went down on one knee before the audience, chatted in Russian with the crowd, and played some rather nervous mainstream blues. Tickets cost an arm and a leg, but they were apparently worth it.

On August 9, 2012, Madonna performed a major gig in St. Petersburg. During the show, she gave her support to Russia's gay and lesbian community (the city had just passed a law prohibiting the promotion of homosexuality among minors) and to the arrested members of Pussy Riot.

A number of protest groups took Madonna to court, intending to bring her to justice for the promotion of homosexuality among minors – they claimed there had been children in the audience. They attempted to secure damages for moral outrage totaling some 333 million rubles (about $11 million).

On Nov. 22, a St. Petersburg court threw out the case, citing an “adults only” warning on the concert tickets; the event had clearly not been for minors. As usual, the show itself went off in spectacular style.

The Chapman Brothers in Hermitage Gallery

On Oct. 20, the Chapman Brothers had an exhibition in Russia’s foremost art gallery – St. Petersburg's Hermitage Gallery. The British artists’ show, titled “The End of Fun,” was a modification of their show “Hell,” which features a number of aquariums and ranks of toy soldiers torturing and executing each other.

By the fall, Cossack detachments had already mobilized in most Russian cities to protest different kinds of contemporary art; they were particularly displeased by the clown on the crucifix who forms part of an “End of Fun” exhibit. The Hermitage checked in advance with city prosecutors against allegations of extremism and came out clean.

In any case, Jake and Dinos Chapman apologized to Russians, saying they were “extremely sorry,” and promised never to bother bringing their work to Russia again.

The Icons exhibition that was shut down by Cossacks

The art exhibition “Icons” in Krasnodar – a city in southern Russia near the Black Sea – was shut down by Cossacks. The exhibition was assembled by Marat Gelman, an influential gallery owner and contemporary art curator who took the exhibition to Krasnodar.

The exhibition presented a new perspective on religious artifacts by contemporary artists. The exhibition prompted fury in the region and priests came out against it; the region's prominent contingent of Cossacks formed picket lines outside the entrance to the venue, with fights ensuing. The exhibition failed to open and Gelman claimed he had been assaulted.

An extensive retrospective of Russian contemporary art opened on Jun. 14 in Barcelona, displaying the work of Kandinsky Prize winners over the past several years.

“When we examine the works that were submitted for display, we conclude that artists who are involved in theoretical explanations of their own output are creating a kind of ‘alternative program’ – they are heavily ideological. Their idea of art is not so much related to life, or people's mentality and the ways they communicate, but rather with an ideological agenda that's developing in the political arena” said the exhibition's curator, Andrei Yerofeyev.

A footage from "The Horde" film. Source: Kinopoisk.ru

The new film “The Horde” premiered on Jun. 23 at the Moscow International Film Festival. The plot is the painful story of medieval Russian Archbishop Alexey and his journey to the Mongolian khan – the ruler of both Tatars and Russians. The archbishop was charged with curing the eye disease of the khan's mother.

The terrifying film that resulted won for best director at the Moscow Film Festival, along with numerous other awards. Although the film went down well with priests, it enraged historians and foundered at the box office.

Muslims living in Russia took to the streets to protest against the controversial film "Innocence of Muslims." Source: ITAR-TASS

The film “Innocence of Muslims” by Nakoula Basseley Nakoula (a degrading account of the life of the Prophet Mohamed) was declared to be “extremist” by the Tverskaya District Court in Moscow, after extensive campaigning and a report from the general procurator's office. The ruling made the film's distribution in Russia illegal. The event prompted furious Internet discussion about the legitimacy of Russia's laws on extremism.

During the Red Square Screenings held Oct. 15-20 in Moscow, the Russian Film Foundation invited foreign movie distributors to see new Russian films and “works in progress.” It marked the first systemic attempt to promote Russian filmmaking abroad, in both art-house and mainstream genres.

The screenings were held in the movie hall of the GUM – Moscow's venerable shopping mall, opposite the Kremlin. The event promoters believe that the showing was worthwhile and that movie distributors from America and Europe took an interest in Russian films. The event is scheduled to be repeated annually.

Russia's TV channels will have to comply with the requirements imposed by the federal law that aims at "protecting children from information detrimental to their health and development.” Source: Getty Images / Fotobank

On Sept. 1, a new law came into force to protect children from harmful information. The law imposes age-category ratings of 0+, 6+, 12+, 16+ and 18+ on all cultural material: books, films, computer games, websites, and publications.

First to be hit by the law were classic Soviet-era films and cartoons, which feature a number of antisocial characters who drink, smoke, and are prone to aggression.

Even so, it remains the first working attempt since the Soviet era to impose mandatory ratings, and it is gaining pace on the fly.

A footage from "The Far side of the Moon." Source: Kinopoisk

The Russian TV series “The Far Side of the Moon” (based on the British “Life on Mars,” which also had a U.S. version) premiered on Channel 1 television in November 2012. It emerged as the best of many adaptations of Western TV series.

In the show, policeman Mikhail Soloviev returns to the year 1979 after an accident and finds himself inside his father's body – incidentally, also a policeman. Where British and American cops may have writhed against the policing norms of the past – interrogations and bent evidence – the Russian series came out rather differently, with the police captain struggling against a world of socialist legal systems.