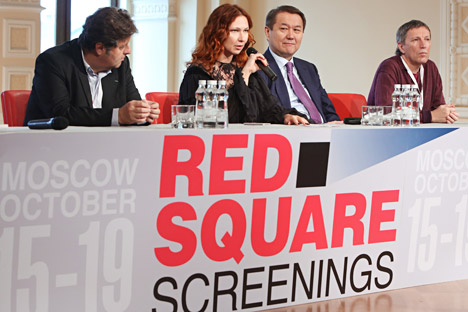 Moscow recently played host to Red Square Screenings – the first full-scale film fair to promote Russian movies internationally. The event was attended by foreign buyers, who shared their ideas about Russian movies with our RBTH correspondents.

After opening ceremonies on Oct. 22, the inaugural edition of Red Square Screenings came to an end this week in Moscow. The event, designed to sell Russian movies to foreign distributors and festivals, was organized by the Russian Cinema Fund, which finances and promotes Russian films and Russian film companies. The film fair kicked off in the GUM department store on Red Square, directly opposite the Kremlin.

As befits any Russian event, the opening ceremony – which included breakfast for guests – was delayed by one hour. Afterward, without further ado, an announcement was made about the fact that Red Square Screenings had been organized with support of Marché du Film of Cannes – one of the most important and reputable film markets in the world. This, indeed, was quite a triumph.

The second important announcement revealed that some of the applicants would receive grants from the German-Russian Co-Development Fund, which supports the early development of German-Russian film productions.

Of the eight projects that applied for the awards, three were successful: Aleksandr Mindadze’s “Lieber Hans, Dorogoy Peter,” Sergei Melkumov and Alexander Rodnyansky’s “Antaliagrad,” and Aleksei Uchitel’s “Comrades.” The German-Russian Co-Development Fund granted each of the projects $15,500 to facilitate further development of their films.

“Lieber Hans, Dorogoy Peter” tells the story of a German engineer who comes to the Soviet Union before the war and finds love and friendship. “Antaliagrad” is a film about a confrontation between two tourists at a Turkish resort: one tourist is Russian (played by Fyodor Bondarchuk), the other is German (played by Til Schweiger).

“Comrades,” on the other hand, is a movie about people who get past the iron curtain by travelling forward in time from stagnation-era Soviet Union to contemporary Berlin. Each of the three films is a real co-production that is financed by Russian and German investors. The modest contribution of the Co-Development Fund will serve mainly as an indication for real investors.

Once the opening ceremony had concluded, it was down to business. Foreign buyers were treated to dozens of films, including Russian hits, festival films and blockbusters (both in terms of costs and box office, as the two are different in Russia).  A number of other unfinished projects were also showcased. Some of these “works in progress,” such as the movie “Viy,” have been in production for far too long.

I’m very glad that I attended the debut Red Square Screenings. It is high time Russia started exporting its films. The Russian Cinema Fund and Roskino have been doing this for two years now. The organization of the event was top notch, and I think that the foreigners who came were very impressed. I’ve seen many of the movies already, while screening films for Cannes. But I managed to fill in some gaps here – I saw films by Balabanov and Lopushansky, and then we had private viewings beyond the framework of Red Square Screenings. It has been a very helpful trip.

We are a small, totally independent company. We have a small portfolio of carefully selected, high-quality films. Some Russian directors are extremely popular in Greece. Sokurov, Klimov, Paradzhanov and Serebryannikov are a few examples. I have to think about the commercial potential of films, but it is hard to make money on movies in Greece right now. Cinemas are often empty; people are short of money and generally not in very good spirits.

The Greeks prefer Hollywood movies with visual effects – something that doesn’t require any effort from the viewer. But there is a small group of people – the real film buffs – who love discovering new movies and new directors. It’s all about them, and about us, of course.

I have been distributing Russian films for 40 years. I have brought more than 60 Russian movies to France. My company, Pyrine Films, had a contract with Sovexportfilm. They took two French movies to Russia and provided one Russian film for France. But we had a place to screen the films back then. We didn’t make much money, but our showcases helped increase sales of Russian films on French television fivefold.

Squaring the Circle of Lige on film

Russia's hope in win in Venice

I’m currently working with Nikita Mikhalkov; my French partner, Wild Bunch, invested $1.5 million in his “Burnt By the Sun 2.” The film ran well, although it was not very successful here. In Cannes, it received 15 minutes of applause, which is a precious award from the public. I’m releasing Pavel Lungin’s “Tsar in Eastern Europe.” I also had Bodrov’s “Mongol” and Mikhalkov’s “12.”

I’m here now to buy films from Central Partnership. They have good projects here – the mini-series “Chapayev,” for example. I want to buy it for Eastern Europe. They don’t know “Chapayev” in France, but they know him well in Bulgaria. I saw a very good movie here, “The Horde.” But I can’t buy it. It is a very dark, obscure movie, with people being decapitated. People are tired of this; they can see it on the news every day. They need a comedy that takes it easy.

I saw Shakhnazarov’s White Tiger, which is a very good film about WWII and tanks. But it would be hard for me to show this movie to my public. They won’t understand the movie in France – where is the tank, what about it? And they have a blond Hitler in the film.

It is good that the Russian government invests in movies, but it should also invest in promotion and distribution.

As soon as they came to Europe, the Americans started buying up cinemas so they could show their movies. That’s what needs to be done. We need to open cinemas in Paris, Rome, Berlin, Sofia and in the former socialist bloc. Russian movies used to be number one in Sofia. There are none today – I only buy films for television.

In March, I brought Konchalovsky’s “The Nutcracker,” which failed. Socialist Bulgaria had 3,600 cinemas; now it has 60, and they are all controlled by Americans. When I brought “The Nutcracker,” they said they could only run it at 10 a.m. and 10 p.m. Who goes to the movies at 10 o’clock in the morning? This would kill the film! If Russia wants to enter the global market, it needs to showcase its films.

The Red Square Screenings is a very good first step. I suggested it to them five years ago. In France, the state set up uniFrance, and sales of French movies went up.

It’s hard to say whether or not audiences will want to watch Russian films. I’ve already distributed Russian movies in the United States: “Hipsters” and Khrzhanovsky’s “4” are two examples. Critics praised the films, but not so many people...