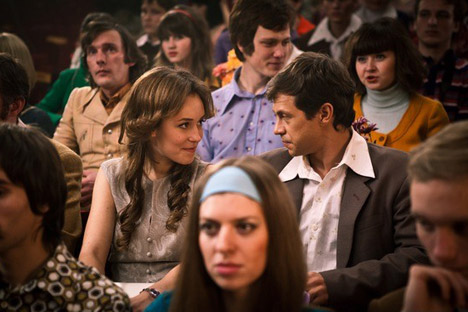 On Nov. 5 Channel One aired the first of 16 episodes of “The Far Side of the Moon” – a Russian remake of the British series “Life on Mars.” The Russian version was filmed by Russian director and screenwriter, Alexander Kott. Source: Kinopoisk.ru

Russia’s Channel One has begun airing its new time-traveling comedic drama, “The Far Side of the Moon.”

A modern-day wild car chase ends when the criminal being pursued hits police Capt. Mikhail Mikhailovich Solovyov and then crashes into a truck. By the time Solovyov regains consciousness, he is in a hospital. Solovyov cannot find his mobile phone and the nurses fail to understand what it is for which he is searching.

One of the doctors is busy typing up a samizdat (self-published) copy of Boris Pasternak’s “Doctor Zhivago.” All three television channels are broadcasting a live speech by General Secretary Leonid Brezhnev. A pretty nurse comes in with Solovyov’s street clothes: instead of his jacket and jeans, she hands him the uniform of a senior police lieutenant. Affixed to the uniform is the badge of his father, Mikhail Ivanovich Solovyov, whom he has not seen in over 30 years and whose place he has evidently now taken.

The year is 1979, or thereabouts: the Soviet Union has not yet collapsed and, in place of the Cathedral of Christ the Savior, there is a gigantic outdoor swimming pool.

Mikhail tries to figure out what is happening and how he can get back to where he was, but events are unfolding too fast. His boss in this place, Maj. Kotov, uses the situation as an excuse to fire Solovyov, whom he considers to be an inconvenient subordinate. A foreigner Solovyov meets in passing only laughs when asked whether or not current the American president is a black man – he must be hearing voices. Meanwhile, colleagues attribute Solovyov’s bizarre behavior to the car accident. He also has (or rather, his father has) a house where his wife and son live: Mikhail’s mother and his younger self.

On Monday, Nov. 5, Channel One aired the first of 16 episodes of “The Far Side of the Moon” – a Russian remake of the British series “Life on Mars.” The Russian version was filmed by Russian director and screenwriter, Alexander Kott.

In the British version, police officer Sam Taylor is hit by a car and wakes up in 1973, the year David Bowie released his surrealistic single “Life on Mars?” The BBC named the series after the song by Bowie, whose music is also used throughout the soundtrack.

Stories of time travel, particularly in which the hero suddenly finds himself in the thick of historical events and changes their outcome for the greater good of his country, are all the rage in Russia right now. It must be acknowledged that enthusiasm for this genre came to Russia from the West.

Russian fictional time-travelers are constantly meeting with comrade Stalin so they can finish building the new T-34 tank ahead of schedule and win the Great Patriotic War (as WWII is known in Russia) on June 23, 1941; or, they are replaying Russia’s war with Japan, or averting the murders of czars Paul I and Nicholas II, or preventing False Dmitry, Leonid Brezhnev and Mikhail Gorbachev from coming to power.

There is no need to go into detail, but the choice of turning points in Russian history is great.

The hero of the BBC’s “Life on Mars” does not try to create a second future; for him this is a senseless idea, since he is convinced that everything that happens is the product of his imagination. Nevertheless, in the final episode, Taylor ends up choosing the past over the future.

The ads for “The Far Side of the Moon” suggest that the hero of the Russian version chooses the future; but this is not the only difference between the two versions. The Russian remake seems more like an original series in which it is very hard to recognize the British inspiration – and this is not just a matter of outward differences.

England has changed very little since the 1970s, whereas the hero of “The Far Side of the Moon” finds himself in a completely different world – seemingly familiar, yet utterly foreign.

So much has happened in Russia in the last 30 years that what seemed natural then is seen in a very different way today. In the 1980s, people were more open and ready to help each other out of the goodness of their hearts, kopecks bought what rubles do now, the policemen were different and so were the “hooligans” – by today’s standards, they seem less like real hooligans and more like the heroes of Soviet-era comedies.

Solovyov’s acclimation to these new-old circumstances is truly comic. “Why is everything so old?” he asks, pointing to the television screen where Brezhnev is reading a speech from notes. He tries to explain to people that “deeveedee” is not a town in the Soviet republic of Georgia. He fumbles with a Soviet pen and ends by splattering a photograph of the boss with ink.

Still, the comic element is not all there is to this new series. Late at night, after his first hard day at work, Solovyov comes home and the tragedy begins: a thick overlay of melodrama promises to include both love and attempts at altering the future.