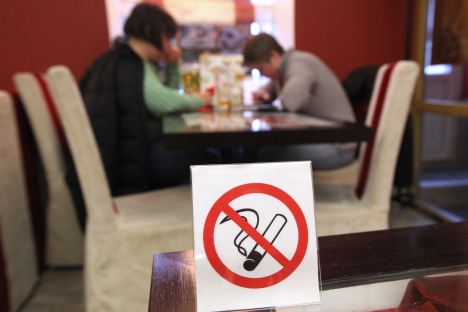 Russian authorities will impose the near total ban on smoking in public places. Source: ITAR-TASS

In 2013, Russia will pass a tobacco control law with the aim of reducing the number of tobacco sales outlets by 10 percent.

The provisions of the Ministry of Health's new law were first leaked to the Russian media in August 2011. The disclosure of the forthcoming ban caused a stir in Russia, dividing society into ardent supporters and no less ardent opponents of the bill. The latter claim it is "not a law against smoking, but against smokers" and its adoption will ruin tens of thousands of small businesses.

The novelties of the law that will have the most repercussions include the near total ban on smoking in public places starting in 2015. Furthermore, cigarettes will be outlawed not only in cafés, restaurants, night clubs, etc., but also, for instance, on board long-distance trains and passenger ships. Given the distances in Russia (Moscow to Vladivostok by train takes 6.5 days), it seems doubtful that such a provision can be enforced.

Not only will smokers be unable to light up in the standing sections between compartments, but stops along the way will also be smoke-free, since smoking at train stations (and airports) will be off-limits.

Also controversial are the proposed bans on the sale of cigarettes at small outlets (less than 540 square feet in area) and on the open display of tobacco products. Legislators assert that the initiative is intended to protect minors from smoking and to increase the government's ability to monitor compliance with the law prohibiting the sale of cigarettes to children at all points of sale.

Small businesses resolutely oppose such legislation. They estimate that cigarette sales generate up to 50 percent of their cash flow. According to small retail associations, the loss of cigarettes will force many to close down shop and lay off employees.

As for the restriction on floor space, kiosk owners point the finger at major retailers, which today account for just under 10 percent of all cigarette sales. Given that tobacco retail in Russia is estimated to be worth $12 billion a year, major retailers would certainly welcome a larger slice of the market.

Due to the large number of objections raised under the relevant interdepartmental agreement, then Health Minister Tatiana Golikova repeatedly asked the government to postpone the deadline for the bill's submission to the Cabinet of Ministers. The parties, however, failed to reach a compromise.

Where Golikova fell short, the new health minister, Veronika Skvortsova, succeeded. With the support of the newly appointed (and non-smoking) Prime Minister Dmitry Medvedev, Skvortsova wasted no time in taking all compromise off the table.

"If small business lives off beer and cigarettes, Russia does not need it," she said upon taking office.

The new government approved the tobacco control law without further ado, and on October 31, 2012, it was introduced by the government to the State Duma. Shortly before New Year’s, parliament passed the new law on its first reading, but the culmination of events is expected to take place in 2013.

A set of basic amendments will be made ahead of the second reading, and Prime Minister Medvedev has already made it clear that the government is ready to soften some of the provisions.

Statistics show that Russia has one of the highest rates of smoking in the world. Russia's position in the smoking per capita rating ranges from first to fifth place, depending on the method of research. In any event, the fact that tobacco consumption in Russia is a huge problem is not disputed by anyone.

According to Rospotrebnadzor (Russia's Consumer Rights Protection Agency), Russia is home to more than 40 million smokers. The habit afflicts 65 percent of men and 30 percent of women. Russia's Ministry of Health reports that more than 700 people die as a result of smoking-related illness every day, adding up to 260,000 victims per year. Former Health Minister Tatiana Golikova once said that smoking accounted for 17 percent of all deaths in Russia.

However, many experts cast doubt on such figures: in addition to smokers who die of lung cancer (which is often caused by smoking), smokers who die prematurely of cardiovascular disease, for example, are also tallied by the Ministry of Health as casualties of smoking.

Currently, the main regulatory instrument limiting smoking in Russia is the federal law "On Restriction of Tobacco Smoking," which was adopted in 2001. By and large, the statute is very lenient on smokers and cigarette producers.

The law stipulates that warning labels be placed on packs, establishes a maximum retail price, and prohibits smoking in many public places (offices, medical institutions, government buildings, etc.); it also allows smoking rooms to be installed in those same public places.

Clearly, the law lags far behind much tougher measures introduced by other countries. Russia is part of the global anti-smoking process, having ratified the World Health Organization (WHO) Framework Convention on Tobacco Control in 2008. The framework was adopted in 2003 and now underpins the worldwide offensive against smoking.

The Framework Convention is a declarative document, and many of the provisions are voluntary. Almost every clause of the document stresses that signatories to the convention should be guided by national legislation in the adoption of measures to reduce tobacco consumption. There are strict directives only regarding cigarette advertising, the sale of cigarettes to minors, tobacco company sponsorship, etc.

On signing the Framework Convention, Russia proceeded to toughen its own advertising law and introduce larger warning labels. However, anti-smoking public organizations in receipt of international funds – such as the Bloomberg Initiative and the Bill Gates Foundation – continue to press for a fundamentally new federal law to tackle smoking.