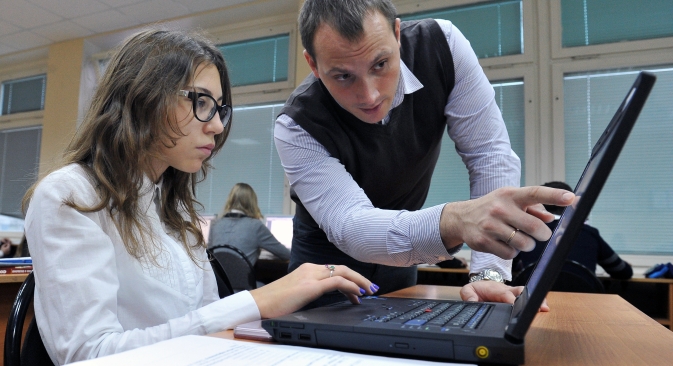 A completely new practice has been introduced to Russian education: responsibility for poor performance and second-rate teaching will lie with pupils and teachers. Source: RIA Novosti / Vladimir Pesnya

Last December Russian President Vladimir Putin signed a new law entitled “On Education.” The law, which will enter into force on Sept. 1, 2013, has become one of the most talked-about and complicated statutes in Russian legal practice.

Until now, state educational establishments had followed a law adopted in 1992. In 1996, the law “On Higher and Post-University Education” also entered into force. For the past 20 years, these two documents have formed the basis for the entire Russian education system.

Gradually, however, these were padded with an ever-increasing number of subordinate legal acts that introduced new regulations and stamped out the old ones. Once these revisions numbered in the hundreds it became very difficult to actually apply educational laws. Thus, legislators recently decided that the time had come to bring in a new document to cover all levels of education and answer the demands of modern times.

The new draft bill was first published in 2010, and the initial version was met with an onslaught of criticism. Experts picked up on small details (grammatical errors, for example) and also criticized the document for its general vagueness.

The current version of the law is the seventh to have been released. Even as it was being examined by the State Duma, it was clear that the bill’s fundamental norms concerning salaries, grants and benefits for rural teachers were the sources of the uproar in the professional community.

By the second reading, the social guarantees were returned. As a result, the final text of the bill establishes standards for the salaries of teachers, who will now be paid no less than the overall average salary for their respective regions. It also sets out special benefits for rural teachers, standardizes educational grants and guarantees cheap rates for student accommodations.

As before, critics of the law say it is highly conservative and will end up changing very little.

“Nothing is clear about who the reforms will concern, where they will be implemented, and how much the state is willing to pay. At the behest of our government and representatives of the Ministry of Education and Science, many of the most important decisions have been delegated to representatives of the regional authorities and the municipalities," said Oleg Smolin, deputy chairman of the State Duma Education Committee.

"The law includes more than 150 reference rules, and, in actual fact, it ends up distributing powers amongst government officials,” he added.

More pro-government education experts believe that, first and foremost, the document will create the conditions necessary for the further development of education – now, much depends on the actual education providers themselves.

“The law by itself will not make a positive difference: it’s the people themselves who will contribute to the quality of education," said Efim Rachevsky, member of the Russian Civic Chamber. "The main point of the law is not to interfere, but to form a framework that can be made whole by best professional practice."

"This law will not prevent innovative development: it will create the most beneficial legal conditions, it will mean all children in Russia start out with equal opportunities, it will make it possible to offer the best standards of education, regardless of the school’s name or the status of the university,” Rachevsky argues.

Some of the principal issues surrounding this law have still not been addressed: for example, the issue of separating schools from the church, which is enforced by the constitution.

The law allows Russia’s best-represented religious denominations to contribute to the preparation of the curriculum and material for the course known as “The basics of religious culture and secular ethics,” which will replace religious education. Previously, this was done within the framework of a by-law controlled by the Ministry of Education.

The new law covers all levels of education, from preschool to doctoral studies, as well as support for special needs children.

“Preschool education has become an official stage in general education,” said Rachevsky. “It is very important because it ensures the continuity of educational methods, and, in this respect, we have been lagging behind the rest of the world.”

Compulsory learning standards are being introduced for preschool pupils, and the process itself is divided into two component parts – learning and supervised care. Services for supervision and care will be financed by the budget and parental contributions, and the educational programs will be fully financed by the state.

There have been important new introductions on the elementary school level, too: home education received legal status, as did long-distance learning and online collaboration between schools.

“Online collaboration between educational establishments is very important both for schools in remote locations and for schools within the region,” said Irina Abankina, director of the Institute of Developing Education at the National Research University – Higher School of Economics. “It allows them to pool their experience and advanced teaching methods. And what is important here is that it will be financed separately.”

An inclusive educational policy has been enshrined in law, which will allow children with disabilities to receive their education in normal schools. Moreover, a completely new practice has been introduced to Russian education: responsibility for poor performance and second-rate teaching will lie with pupils and teachers, respectively.

“At last, pupils are being obliged to study: the law formalized the possibility of expulsion, and, at the same time, someone bears responsibility for the children studying well,” Abankina said.

The law permits paid educational activities to take place within the school. The school is entitled to take payment for all subjects individual pupils may wish to receive over and above the school curriculum. However, the compulsory core curriculum is still very extensive, so most of the subjects will remain free.

The economic models for education have also undergone a fundamental change.

“Schools can be financed from the federal and municipal budgets, which use completely different funding programs. The difference between the systems is laid out clearly and thoroughly in the new law. For example, rural and ungraded schools will be financed according to separate procedures; but there is a minimum amount of funding that all schools are guaranteed to receive, which ensures the schools will meet the required educational standards,” Abankina said.

This is an important reform. A few years ago, a capitation payment method was introduced, whereby the amount of money the state allotted to a school depended on the number of pupils studying there. This system forced many rural schools to close. The new law does not only guarantee a minimum funding level, but it also does not allow for a school in a village to be closed unless the village council agrees to it.

The average level of professional education has become even more accessible, as well. Now everyone has a chance to get into college without having to take entry exams.

Higher education will remain as it was before: the baccalaureate, the specialist system and the master’s degree (all of which has been in existence in Russian universities for years) will finally be officially enshrined in law. Baccalaureate studies last four years, and the master’s program is another two.

The “European” system was introduced more than 10 years ago, but it was not written into federal law. Throughout these years, a “specialist” system has been in place at the same time – a five-year, full-time university course that was left over from Soviet times. This situation has also been preserved by law.

For those planning to continue their studies after university, a new, separate education level will be instated – “Preparing Highly-Qualified Staff.” This new course will include traineeship and assistantship programs, internships, and training for academic and teaching staff.