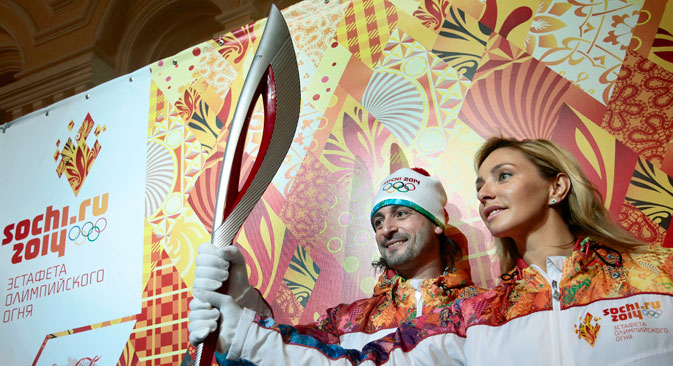 Preparations have stepped up for the Sochi 2014 Olympic Games. In mid-January, the Olympic and Paralympic relay torches were unveiled at the GUM shopping center in Moscow. The torch relays are expected to be the most ambitious to date.

The Sochi 2014 torch designers were tasked with conveying the concept of the Olympics Games, based on the idea of the convergence of Russian traditions and contemporary trends.

The torch resembles of a firebird feather, which is traditionally used in Russian fairytales to light the way; this “feather,” however, is made of cast aluminum alloy. The handle and central insert are molded from high-strength polymer. The torch weighs 1.8 kilograms (4 pounds) and is 0.95 meters (3 feet) in length. Its center of balance is perfectly positioned to make it easier for torchbearers to carry. The torch is designed to withstand adverse weather conditions, especially high winds and frosts.

Click to enlarge the infographics. Drawing by Alena Repkina.

Olympic figure skating champion Tatiana Navka was the first to hold the brand new torch. “I think it’s so beautiful – red and silvery. I hope it will bring us luck in Sochi,” she said.

Sochi Olympics ticket scalpers to face fines of up to $33,000

A total of 14,000 Olympic torches will be produced. A competition will decide who gets to carry the torch and wear the uniforms, which were especially designed for the participants of the Olympic relay.

“There will be no special terms for people who want to take part in the relay,” said Sochi 2014 Organizing Committee director, Dmitry Chernyshenko. “Anyone can take part.”

“The Sochi 2014 Olympic relay will involve more people and more locations than any other relay in the history of the Olympic movement,” Chernyshenko said. “It will run through 2,900 residential areas; we are designing the route so that 90 percent of the population will be able to come out and see the torch. The flame will be delivered to Elbrus, Lake Baikal and the North Pole. We also hope that it will travel to outer space.”

The Olympic torch relay: The facts

The lighting ceremony will take place in Greece, home of the Olympics. The torch will then be transported to Moscow in a special plane on October 7, 2013.

The Olympic relay will run through 2,900 residential areas, 83 Russian regions and all nine time-zones of the country – from Vladivostok to Kaliningrad.

More than 30,000 volunteers will be involved. Each torchbearer will run between 200 and 300 meters (656-984 feet). The flame will travel 534 kilometers (330 miles) per day on average. The torches will be transported by air, train, road vehicles, traditional Russian troika and reindeer. The relay will finish in Sochi on February 2, 2014.