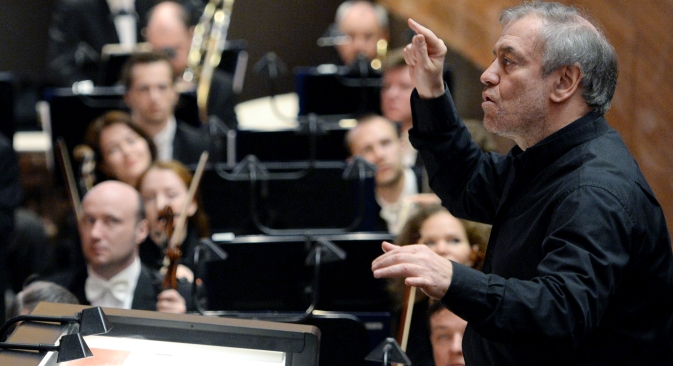 The new stage of the Mariinsky Theatre will open on May 2. Source: PhotoXPress

The ambitious project to build a new stage at the Mariinsky Theatre is almost complete. Valery Gergiev, artistic director of the Mariinsky Theatre, carried out an acoustic test on the new theatre’s main stage and showed journalists the inside of the building this week.

The theatre’s new building has separate rehearsal areas for the chorus, orchestra and ballet, three small halls for chamber concerts and a huge, 262-foot main stage, fitted with the most advanced, hi-tech equipment. The hope is that the interior of the new theatre will be far less controversial than its façade, which was the subject of dispute before anyone had even managed to get inside.

Architect Jack Diamond believes, however, that all the attacks of St. Petersburg residents on the external appearance of the building are due to the trite rejection of anything new, which can be found in any era.

“You know what the critics said about St. Isaac’s Cathedral, which is now one of the main sights in the city, after it was built? That it was too bland and grey. This is a natural process, which is repeated after every major construction project,” the architect told journalists on the tour.

New stage of the Mariinsky Theater

He also emphasized that, while he was working on the project, he took his cue from St. Petersburg’s architectural traditions and tried to make the building blend in with the surrounding landscape.

“All the people who criticize the theatre simply haven’t been inside. Someone has even said that the theatre’s foyer is too small. Look at it,” said Diamond, with a wave of his hand. “Do you really think it’s small?”

The foyer is decorated with glowing, honey-yellow onyx and studded with chandeliers made from Swarovski diamonds, boasting a cascade of glass staircases rising into the air. It does indeed make a strong impression. The theatre’s staff promises that, in the evenings, when daylight will not counteract the lighting of the expensive stone, the sense of luxury will be even greater.

Acoustic engineer Jurgen Reinhold, who was previously involved in the refurbishment of the Bolshoi Theatre’s historic building and has now built the main auditorium for the Mariinsky’s second building, told Izvestia that audiences will be able to hear all sounds excellently in any part of the auditorium.

“This theatre provides a maximum distribution of sound to every seat. The auditorium is designed in such a way that the sound is reflected from each level of the ceiling onto each row of seats. The floor covering follows the classical tradition of theatre construction – it’s completely made of wood, with no concrete. This is the approach I used in the Bolshoi Theatre. The orchestra pit here is very mobile and, if required, special platforms can be used to emphasize individual groups of instruments,” said the engineer, who is confident about the project.

During the acoustic test, however, the retractable platforms were not used. The orchestra, conducted by Gergiev, performed excerpts from Verdi’s “Requiem,” Mahler’s “Fifth Symphony,” “Eugene Onegin,” “Khovanshchina” and other works.

Reinhold’s estimation was fully justified: The auditorium has been designed in such a way that it has virtually no “dead zones,” and the sound travels evenly around the whole room. The occurrence of a distinct echo can be attributed to the fact that the auditorium is empty.

The only negative in the way the new Mariinsky sounds is the excessive volume of the orchestra, which constantly drowned out the soloists ­– and the soloists were not even turning their backs to the audience or walking to the back of the stage. It may be possible to solve this problem, however, by adjusting the orchestra pit.

“On the whole, I am very pleased,” said Gergiev after the acoustic test. “Today, we didn’t experiment with a different seating arrangement for the orchestra, and that makes a striking difference to the sound. I think, today, we got as full an impression as we can of how the theatre will sound. The stage here has enormous wing areas, which, apart from their technical potential – instant scenery changes – offer acoustic riches. The more air and space there is, the more interesting the sound.”

The building is now being cleared up and the finishing touches are being put to the stage equipment and the technical building services. The new stage will open on May 2. Maestro Gergiev has promised to invite the main critics of the building’s architecture – film director Alexander Sokurov and Hermitage director Mikhail Piotrovsky – to the ceremony.

Tickets for the new stage will go on sale a week from today.