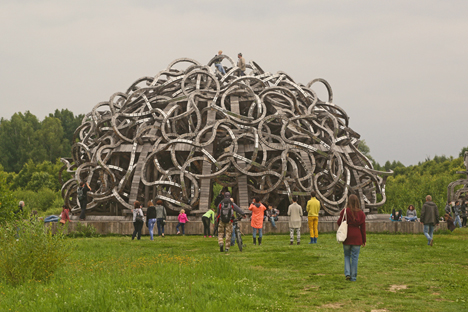 Land-art installations dot the picturesque countryside around the village of Nikola-Lenivets, which has been transformed into an artists' colony over the last decade. Source: Yaroslava Kiryukhina / RBTH

Acoustic installations of all kinds, a breathtaking performance by naked Russian artist Fyodor Andreevich Pavlov, and modern poetry all came together at ArchStoyanie — a three-day festival of architecture and art at Nikola-Lenivets, four hours outside of Moscow.

The heart of the festival was a piece of art called “Two Spheres” by German multimedia artist Julius von Bismarck: A metal sphere fell from a height of 46 feet and crashed to the ground, causing a mini earthquake. It “throbbed” both audibly and visually every half hour, throwing mud all over the place.

Held for the eighth year running, the ArchStoyanie summer festival attracts both fans of contemporary art and people who simply feel like taking a trip to the outdoors.

The name of the festival translates as "Archaic Standing," in reference to the historic event that took place here more than five centuries ago: the Great Standing on the Ugra River.

This was a bloodless standoff between the Khan of the Golden Horde, Akhmat, and Grand Duke Ivan III of Russia. The two leaders were on opposite sides of the Ugra River, a tributary of the Oka River, along which ran the border of the Duchy of Moscow.  In autumn 1480, this standoff marked the final fall of the Tatars’ Golden Horde yoke.

No such thing as Russian land art

Land-art installations dot the picturesque countryside around the village of Nikola-Lenivets, which translates as “Lazy Nick” and has been transformed into an artists' colony over the last decade.

Most of the outdoor installations were created by Nikolai Polissky, an artist who moved to Nikola-Lenivets in 1989. He revealed to RBTH that there is no such concept as Russian land-art.

“It’s a great pity, considering that we have vast territories. However, during Soviet times it was forbidden and little has changed so far,” he said, adding that he was the first who tried to create real “land-art” in this place.

Traditional land-art is a form of art that uses materials from the natural environment, such as hay, logs, soil and clay.

According to Polissky, a former member of the underground Soviet art collective known as Mitki, it does not require a viewer; instead, land art is created only for self-expression, being a so-called pure art.

Even Nikola-Lenivets, in his view, represents rather “public art.” To install “Bobur” (an object inspired by The Centre Pompidou), he was required to ask permission from a new owner of the land  — Maksim Nogotkov, who bought Nikola-Lenivets in 2011.

Land art has already existed in the U.K. and in the U.S. for over half a century; in Russia, it started just nine years ago. Currently, Polissky and his team of “peasants” — local farmers from the neighboring villages who help him with construction of his objects — are the only Russians invited to display their land-art works at major shows beyond Russia; they have shown at the Venice Biennale in 2008 and Art Basel in Miami.

Even the Kremlin’s “Grey Cardinal” Vladislav Surkov once wrote an essay on Polissky’s art as an expression of the Russian spirit.

This time there were no new installations, even though ArchStoyanie had previously showcased the most recent land-art objects each year.

“A Moscow-based curator organized a media event for Muscovites, and they traveled about 200 kilometers [124 miles] to get there,” said Nikolai Polissky, known affectionately to locals as “Uncle Kolya.”

This time, newly appointed curator Katerina Bochvar decided to focus on various performances and installations. ArchStoyanie organizers claimed that these performances would only be available for the festival’s visitors and would not be repeated anywhere else.

“Out of the Forest,” masterminded by Valentin Tszin of Poema Theatre, gave its name to the whole festival. The 12-hour-long performance showed the inextricable link between an artist and his creation, metaphorically described as a dark forest. Around 100 people wearing graphic black-and-white outfits took part in his performance, looking more like zombies than real people.

One of the shows involved more than a dozen poets reading their poems for an hour to one solitary listener in Alexander Brodsky's Rotunda, which was located in the middle of an empty field.

For those who cannot part with books even while in nature’s lap, architect Boris Sverdlov and publisher Boris Kupriyanov (one of the initiators and developers of Moscow libraries reform) organized nine field reading-rooms.

One of the most impressive parts of the festival was the acoustic installations. Have you ever thought that “talking” vegetables do exist in reality? The group Iced Architects decided that real vegetables could communicate with their artificial mates — pumpkin, watermelon and eggplant — reading pieces of literature “aloud” for most of the day.

Bored of classical music? And what if the piano could have produced animal voices instead of musical notes, playing Beethoven’s “Moonlight Sonata” through tiger roar. Just such an art object was created by the Electroboutique art group and played by a man dressed as a “leshy”— a male spirit in Slavic mythology who protects wild animals and forests.

A pair of nude performances and a poetry recital on Sunday night were the high point of ArchStoyanie. A young, long-haired girl with a marble skin, lying in a straw-lined “grave” under the glass, looked more like a fairy creature than anything else.

The other nude performer — Moscow artist Fyodor Andreevich Pavlov — decided to roll himself up in a twine net and hang mid-air in Boris Bernaskoni’s Arch, which resembled a portal or a well from inside.