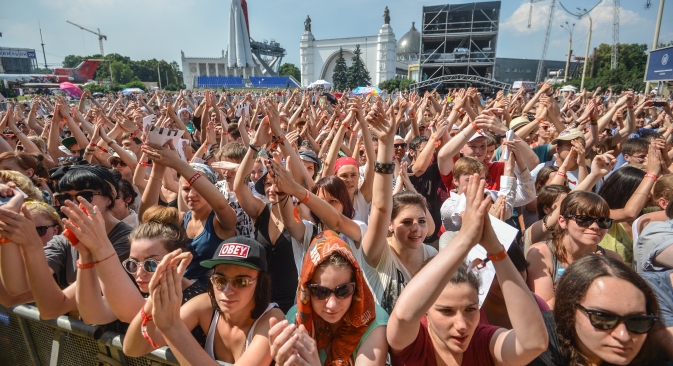 Open-air festivals are booming in Russia, with superstars visiting not only Moscow, but more remote corners of the country too.

Having pulled up the iron curtain and opened up to foreign (especially Western) influence, Russia has become quite used to foreign superstars. Concert tickets go on sale well in advance and disappear rapidly, much like they do in Europe —only with considerably higher prices.

Until recently, foreign performers mostly played in Moscow, sometimes stopping by St. Petersburg and occasionally venturing along the Volga and into Siberia. Full-scale tours of provincial Russia used to be the lot of more marginal stars (Nazareth, Uriah Heep), or pop and rock veterans of the 1980s, including such household names in Russia as A-ha, Scorpions, and Modern Talking.

The last five years, however, have witnessed a complete turnaround. Places far from the capital or any large city are now hosting music festivals, and they never fail to attract audiences in the tens of thousands, or the hottest pop, rock, alternative and electronic music acts.

On the last weekend of June, Moscow hosted the large-scale Park Live Festival. The three-day event’s title appears to be a tribute to the British band Blur’s breakthrough record, “Parklife.” Despite its quintessentially Soviet venue—the All-Russia Exhibition Center (formerly the Soviet Exhibition of Achievements of the National Economy, built on Stalin’s orders)—the event had no Soviet vibes. Performances of folk rock discoveries like Anna Pingina were punctuated by those of giants of Russian rock like Zemfira.

But the festival's calling card was, of course, the presence of Western rock stars, with The Killers as the undisputed headliner; the band’s performance at Stalin’s former exhibition was its Russian debut.

The event’s program also featured nu-metal group Limp Bizkit, which has a strong fan-base among Russian youth. Having performed in Russia already, the band could count on a sure success, and expectations proved true: Despite torrential rain, the enormous crowds were ecstatic.

Incidentally, Blur is planning their second trip to Russia. In the 1990s, only avid Anglophiles knew about them here. Only a small group of young Muscovites—mostly arts and humanities students—were able to really "dig" the first wave of Britpop, which included Suede, Blur, Pulp, and others.

However, in the early 2000s, the release of "Song #2" made Blur hugely popular countrywide. And after the West's tepid reception of Damon Albarn's side project, Gorillaz, was offset by an enthusiastic one in Japan and Russia, he became a true legend here.

Surprisingly enough, given so many Russian fans, Blur had only two concerts in Russia in the 2000s, and Gorillaz had none. The highly anticipated Blur concert will be held on July 13 at the Afisha Picnic (which featured Pet Shop Boys last year and the British ska band Madness before them).

In the Northern Capital

On July 13-14, St. Petersburg will host its annual Stereoleto festival on Yelagin Island, with fresh and trendy music from local and foreign performers.

The festival was created and has been organized for many years by music industry veteran and experienced concert promoter Ilya Bortnyuk.

He began by importing young electronic and alternative music performers according to his own taste; then he gradually ventured to invite bigger stars like Nick Cave.

Through Bortnyuk’s efforts, it took Stereoleto almost no time to become both an established event and a brand, making St. Petersburg's summer festivals even more exciting than Moscow's.

This summer, even though the Northern Capital will not see any superstars, it will host the frontline Canadian Ninja Tune label's DJ Kid Koala, the once-hot disco-punk duet La Roux, Sweden’s Slagsmålsklubben, and others.

On Aug. 1–7, the town of Anapa in Krasnodar region will host Kubana. The festival’s name is oddly suggestive of both Kuban, where it is held, and Cuba, which, apart from flamenco and tango, brings extreme leftist and anarchist rock, punk and aggressive hip-hop to a Russian fan’s mind.

Listen to the best Russian music in the Balalike it podcast!

This made for an appropriate lineup: from Russia’s Leningrad, Basta, and Kirpichi, to U.S. neo-punk legends Antiflag and punk veteran Marky Ramone (who will be performing at Kubana for the second year in a row).

The event attracts concertgoers from all over the country with its unique atmosphere of brother- and sisterhood and wild camping life—though the organizers did announce that the new festival grounds this year will be bigger and better equipped.

One thing is for sure: Every time the festival flies by, its hard-hitting music and dancing start at about 3:00 a.m. and continue well into the night, with a hippie-like spirit of peace and love, which hard rock somehow strengthens rather than weighs down.

This year’s diverse lineup of foreign stars invites comparison to European festivals: System of a Down, Wu-Tang Clan, Bloodhound Gang, Misfits, The Prodigy, Guano Apes and Die Ärtzte (Germany). Euro pop will be represented by Scooter (who are deplorably popular with Russians), the emo band Bullet For My Valentine, intellectual Swedish pop rock band The Sounds, and many others.

In the Volga region

A festival with the unique title of “Rock over the Volga” is held in early June on the banks of the Volga River, near the city of Samara. Tens of thousands of people come to an open field to listen to rock—and only rock—under the scorching sun.

In 2009, only Russian rock stars played here; the lineup included Alisa, a band born in the St. Petersburg underground. The very next year, however, the festival invited foreign headliner Deep Purple, which is well-loved not only by current Prime Minister Dmitry Medvedev, but also by at least four generations of Russians. Ian Gillan found that the band's hit, “Smoke on the Water,” could easily be changed into “Smoke on the Volga” for the occasion.

Wild mint festival in KalugaAt the crossroads of cultures

White Nights festival in Perm brougth together Africa and the Balkans

This year’s foreign headliner was Rammstein. For nearly an hour and a half, the band blasted out their hits and trademark fireworks. The performance also produced something of a trademark scandal, as certain tendentious Russian politicians interpreted the band’s kitsch aesthetics as flirting with Third Reich imagery and pornography.

However, this did not spoil the festival (the audience totaled a record 600,000 people this year) or the reputation of Rammstein as a "people’s" band in Russia.

Rammstein’s Paul Landers was born in Belarus, and the band likes to entertain the Russian public with their own cover of the old Soviet propaganda chant about young communists.

In the wake of the Volga fest, Rammstein wrote on their official web site: “This year about 700,000 followers of harder pop music could be counted at the Rock on the Volga Festival in the Russian city of Samara. Rammstein headlined the festival, which took place for the fifth time. Before heading home, the band brought its trip to Russia to a close with a boat tour on the Volga.”