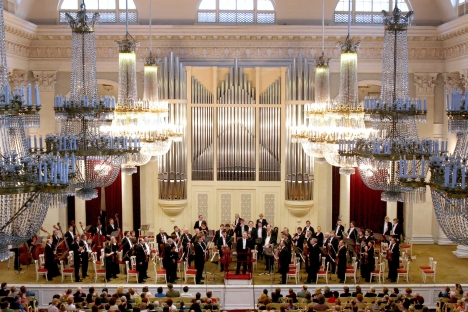 Foreigners may know the Bolshoi or Mariinsky, but the St. Petersburg Philharmonic is a singular treasure of sound. Source: Press photo

Starting from February 12, the St. Petersburg Philharmonic will be touring the United States.

During February and March, the St. Petersburg Philharmonic will be touring the United States with Maestro Yuri Temirkanov to present what it plays best: a repertoire of Russian music with works by Prokofiev, Tchaikovsky, Rachmaninoff, Rimsky-Korsakov, and contemporary composer Gya Kancheli.

The group is a singular one. As Boston Globe critic Matthew Guerrieri remarked on its 2011 tour, “The St. Petersburg Philharmonic is a magnificent musical machine, one in which the engineering is of such precision that it becomes expressive in and of itself.” Or, as concertmaster Lev Klychkov said, “We play with our hearts.”

While the orchestra may not be well know to U.S. audiences, Temirkanov is familiar to concertgoers throughout the world from his affiliations with London’s Royal Philharmonic Orchestra, the Danish National Symphony, and the Teatro Regio di Parma in Italy, among others. In the United States, particularly in the Baltimore and Washington, D.C., areas, he is remembered fondly for his tenure as music director of the Baltimore Symphony from 2000 to 2006.

In St. Petersburg, Temirkanov oversees the International Arts Square Winter Festival, held every December. Many artists have made their Russian debut at this festival, including Leif Ove Andsnes, Lang Lang, and Julia Fisher. Each June and July, Temirkanov directs the “Musical Collection International Festival” with such luminaries as Thomas Hampson, and Helene Grimaud.

This festival was actually my introduction to the St. Petersburg Philharmonic, which I first heard in 2001. Although I’d been traveling to Russia since 1973, I had never been in the winter. An American friend was organizing the 2001 festival. The first time I walked into the Philharmonic Hall, it was clear this was a very special place, and that the orchestra and the audience revealed a deep respect for each other.

The orchestra’s home is the D.D. Shostakovich Philharmonic Hall. Under the auspices of Carlo Rossi, architect Paul Jacob designed the hall in the early 19th century as an assembly hall for the nobility with special emphasis on acoustics. The hall, subtly altered since its construction, has been witness to much history, from Tsar Nicholas I addressing the nobility, to a distraught Rachmaninoff after the premiere of his first symphony, which failed not because of the power of the piece, but underrehearsal.

Under happier circumstances, the first ball of Grand Duchess Olga, the eldest daughter of Tsar Nicholas II, was held in the hall shortly before the beginning of World War I.

Perhaps the most famous event held there was the performance by a skeletal group of musicians of Shostakovich’s Leningrad Symphony during the horrific 900-day siege of the city during World War II. Although the hall was renovated in 2007 to install much-needed air conditioning, the acoustics are still among the finest in the world. Today, the hall is also home to the St. Petersburg Academic Symphony Orchestra and also hosts a variety of musical events.

Founded in 1882 by order of Tsar Alexander III, the orchestra is the oldest in Russia. After the 1917 Revolution, it became known as the Leningrad Philharmonic and from 1938 to 1988 the venerated conductor Yevgeny Mravinsky was at the helm. Because of his friendship with Shostakovich, the orchestra premiered many of the composer’s greatest works.

The orchestra also toured in Europe, Japan and the United States. When Mravinsky died in 1988, Yuri Temirkanov, the director of the Kirov (Mariinsky) Theatre, began his tenure. In 1992 the orchestra took the name St. Petersburg Philharmonic.

It is a fitting tribute to the esteemed conductor who through his orchestra and the Maestro Temirkanov Foundation for Cultural Initiatives does so much to ensure that music is brought to people of all ages.

The orchestra is famous for its resplendent strings. Concertmaster Lev Klychkov, an award-winning graduate of the Leningrad Conservatory, was selected by Conducter Yevgeny Mravinsky to join the orchestra in 1982.

His first tour to the United States was in 1990. “I was only 29 years old. My wife had just given birth to our son while I was away. I remember going to the A&P store in New York City and buying boxes of Pampers to take back. No one in Russia had seen these. It was a difficult time for my country, and meeting Americans was like an injection of energy for me. I have been to America more than 15 times, and I love the American people and their open hearts.”

These warm sentiments are felt by many of the orchestra’s musicians including Pavel Popov, the associate concertmaster, who joined the orchestra in 2004. “I feel wonderful about the countryside of America, the small cities and nature which is so different. I love Carnegie Hall and to perform in that great place.”

They rehearse almost daily and often in sections before and after rehearsals or at a special time, to prepare for their concerts. On their off hours, most teach at the Conservatory and participate in chamber groups, adding much to the rich musical life of the city.