Mystical emblem: The secrets of the hammer and sickle 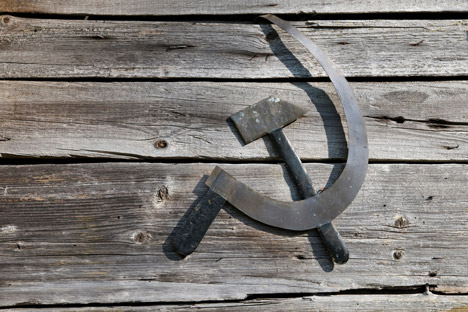 The hammer and sickle on the coat of arms of the USSR is one of the most recognized symbols of Soviet power. The history of its origin is full of secrets and mysteries. Freemasonry, Hinduism, and ancient Aryan and Slavic mythology are all found in the two crossed implements on the Soviet emblem.

The hammer and sickle that decorated the coat of arms of the USSR is probably the most recognizable symbol both of Soviet power and of the ideology of the state represented, as well as the entire history of the country.

The origin of the Soviet coat of arms is ambiguous. Several variants were initially worked out: a hammer and sickle, a hammer and rakes, a hammer and pitchforks, and a hammer and plow. The hammer was chosen for its traditional association with workers in European countries.

Together with an agricultural tool, it was supposed to illustrate Lenin’s famous slogan about the unity of the proletariat and peasants.

In April 1918 the final version of the emblem was approved – a design by the Moscow artist Yevgeny Kamzolkin. In summer 1918 the Fifth Session of Soviets officially adopted the symbol.

It is interesting to note that Kamzolkin was not even a communist and, furthermore, he was a deeply religious man from a wealthy family. The artist was a member of the mystical artistic Society of Leonardo da Vinci for more than 10 years and perfectly understood the meaning of the symbols.

The thunder gods Svarog (Slavic) and Thor (Norse) wielded it in their hands. In China and it is the symbol of the destructive triumph of the forces of evil.

It is now difficult to say what meanings Kamzolkin insinuated into his drawing. Was he solely carrying out the order to create an image for the alliance of peasants and workers, or did he infuse into this symbol his attitude towards revolutionary power, choosing symbols for death, war, and the triumph of evil?

The Russian philosopher Alexei Losev gave the following assessment of the crest: “It is a symbol that propels the masses and is not merely a symbol but is a constructive-technical principle for human actions and volitions … Here we see the symbol of the unity of the workers and peasants, the symbol of the Soviet state.”

The historian and academician Yury Gauthier wrote in 1921 in his diary: “A sharpness has pervaded Moscow for several days: How will it end? The answer will be in the words “hammer, sickle” read in reverse!” The fact is that it sounds like “with a throne” [put together and inversed, the words for hammer () and sickle () create the word , meaning literally “with a throne”] – this is how Muscovites hinted at the dictatorial methods of the Bolsheviks.

In various religions, the sickle is interpreted as a symbol of death. In Christianity, the sheaves and the harvest are equated with the human souls that the Harvester, i.e. the Lord, will gather after the end of the world. It is interesting to note that during the Middle Ages death was depicted not with a scythe but specifically with a sickle.

Curiously, the eagle on the coat of arms of revolutionary Austria also holds a sickle in its left claw and the sickle is likewise placed on that side on the Soviet crest.

The name “Hammer and Sickle” has been given to numerous settlements, villages, and railway platforms on the territory of modern Russia, Ukraine, Belarus, and of the largest steelmaking and metallurgical factories in Moscow, which had belonged to the French merchant Jules Goujon prior to the revolution, was renamed the Hammer and Sickle plant.

There even used to be a special medal called the Hammer and Sickle, which was developed by Stalin’s personal architect and designer, Miron Merzhanov. The medal was awarded to heroes of socialist labor and knights of the Order of Lenin and was considered the highest medal in the USSR. It was awarded to a total of 19,000 people.