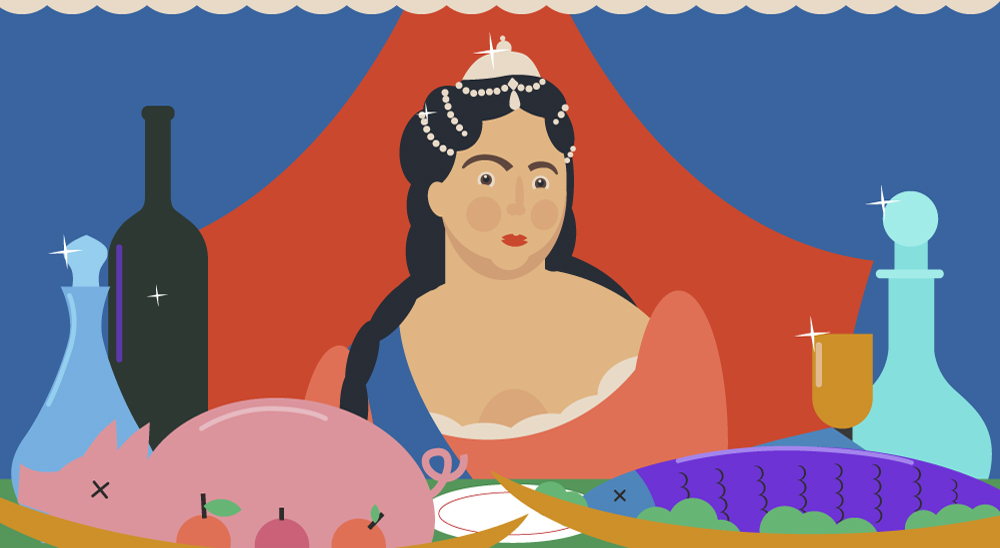 Russian dinners were famous far beyond the country’s borders.

Alena Repkina
In Russia, it was traditionally thought that women should be fleshy and that thinness was attributed to ill health. The same rule applied to men. Catherine I was even forced to gain weight before her wedding with Peter the Great. Russian dinners were famous far beyond the country’s borders, as guests were treated to the finest dishes in enormous quantities. However, there are numerous practices in Russian culture to help you stay thin.

Thinness was a natural state among peasants resulting from constant physical work and a frequent lack of food. Additionally, in mid-spring, the peasants went into the field and spent almost all of their time there, even staying overnight. They did not take much food with them, just some bread and a jug of sour milk – anything else would have been spoiled due to the heat. Kvas, a lightly fermented bread-based drink and sour milk were peasant Russia's favorite drinks.

Peasants also ate what grew in the garden and the forest: cabbage, turnips, sorrel (a sour grass that resembles spinach), berries and mushrooms – all of these summer treats are very low in calories. Sweets were unavailable to common peasants: sugar was very expensive and honey was only used on holidays and as a medicine. So, jam was a rare treat, too.

Orthodox traditions have also contributed to the natural thinness of the common people. According to the church, every Wednesday and Friday are considered fast days. On these days, you should avoid eating meat and dairy products including eggs, but also generally restrict one’s intake of food.

Additionally, long fasts are observed four times a year. Lent, or the Great Fast, in the spring and the Christmas Fast in the winter last 49 days and a few weeks more depending on the date of Easter; the Apostles' Fast and the Dormition Fast are two others. During fasts, especially strict ones, it was recommended not only avoiding the consumption of animal protein, but even vegetable oil. Before confession and communion that people had to attend regularly, fasting for at least three days was also required.

In pre-revolutionary Russia, an effective means of preventing weight gain and battling many diseases was a steam bath. Every Saturday was bath day and it was believed that water and steam washed away not only dirt but also impure thoughts and sins.

As modern physiologists explain, high temperatures followed by the quenching of one’s thirst result in the body being relieved of excess fluid, while at the same time metabolic processes accelerate. Back in the day no one went to a bathhouse deliberately to lose weight, although today it is a very popular technique.

4. The diet of the emperor

Unlike the common people, the elite of Russian society could afford to eat anything and only had to think about controlling their consumption so as not to overdo it. For example, Peter the Great is remembered as a handsome, dapper ruler, who paid great attention to his diet. He would get up before 5 a.m. and eat his breakfast quickly, in order to have time to do all the things he wanted.

The tsar would lunch no later than noon. The menu usually consisted of thick sour “shchi” – cabbage soup, meat or poultry – cold roast duck or cold piglet roasted in sour cream, as well as ham or cheese. Peter the Great was also very fond of fruits picked from the imperial gardens. Overall, tsars preferred a protein and vegetable diet in combination with fresh fruit.

In the Russian Empire, many belonging to the upper class also skipped dinner in order to maintain a healthy weight. This was even noted by Russian writer Ivan Goncharov in "A Common Story."

One of his characters, a high-ranking person in St. Petersburg society, considered the habit of eating dinner to belong to peasants and yokels. Many tsars also skipped a big evening meal. For example, Nicholas I never ate dinner, but then again lunch in St. Petersburg was served quite late– around 5-6 p.m.