When a mermaid does the splits: The stupidest Russian jokes 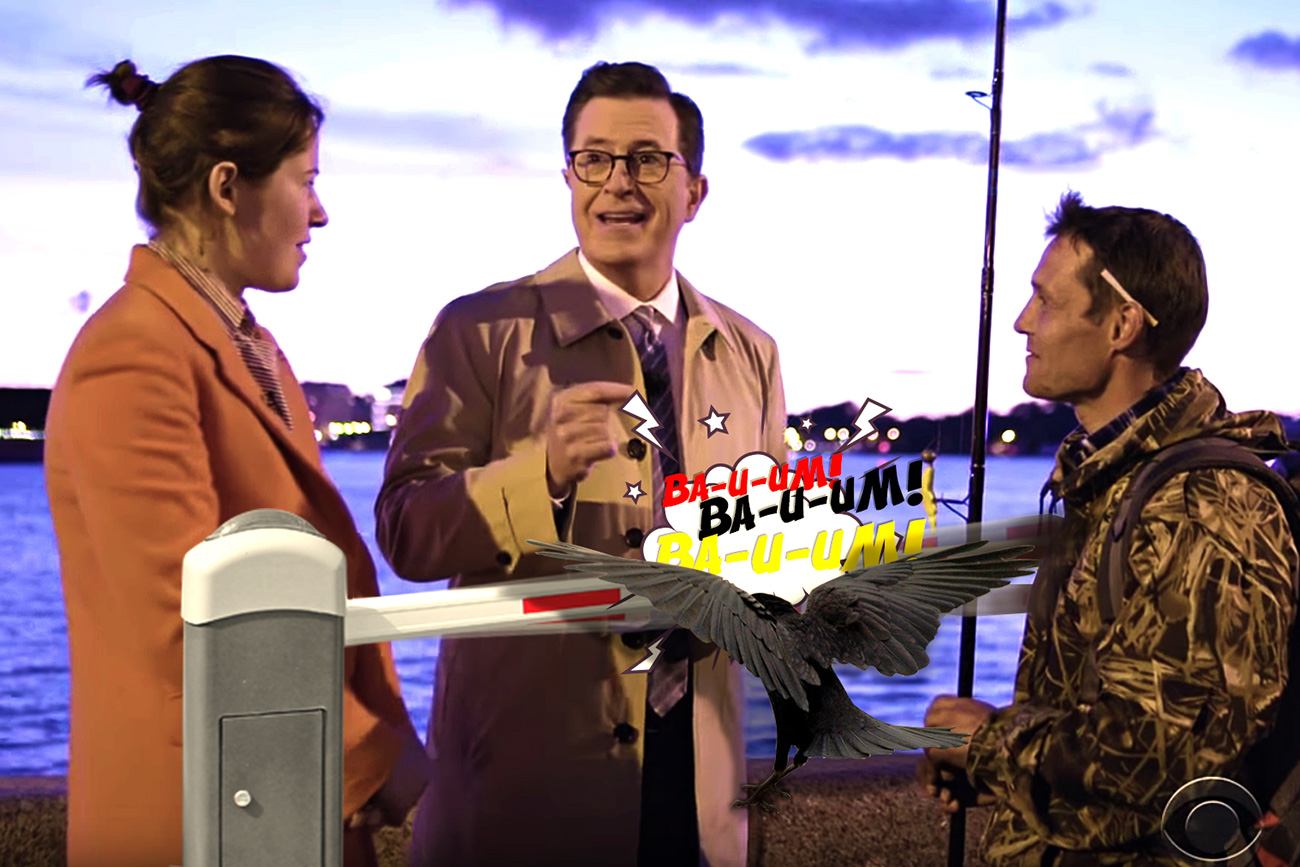 The Late Show with Stephen Colbert.

Screenshot from The Late Show with Stephen Colbert
Did you see Stephen Colbert’s “Late Show Russia Week” in July? Well, if you did you’ll remember a terrible joke told by a fisherman in St. Petersburg - a wonderful example of how the country loves to laugh at the worst one-liners.

This summer American comedian and CBS News TV host Stephen Colbert visited Moscow and St. Petersburg to shoot some material for his “Late Show.” As you can probably imagine, Colbert took in some of the sights like Red Square, spoke to an oligarch, and had a few laughs at the expense of Russian TV. Also, in a bid to understand the country’s humor, the comedian spoke to a fisherman while walking along the Neva River’s waterfront in St. Petersburg, asking him to tell a “classic Russian joke”...

"A crow is flying and suddenly collides into a boom barrier (shlagbaum in Russian). Then it says: shlagbaum-baum-baum-baum," said the fisherman, laughing slyly. Colbert appeals to his translator, but struggles to see the funny side - the incredibly dumb joke remained, well, incredibly dumb.

Actually, Russia is the home of stupid jokes. The quips kids learn in school stay with them for life and adults continue to laugh at them - sometimes rather moronically - for decades to come.

Why? No one can say. It’s something irrational.

So if you hear one of these ridiculous jokes, perhaps do your best to crack an awkward smile - even if you don’t understand it. If you are lucky (or simple enough) you will be impressed, but don’t count on it.

Disclaimer: The following jokes may induce painful cringing, crying, and even vomiting.

And now, take a deep breath…

Dumb, and fortunately, short jokes about fairytale characters have held strong over the centuries:

"Kolobok (a hot, round piece of dough with just a face - yes, you read it correctly...) hanged itself; Buratino (the Russian Pinocchio) drowned; the mermaid did the splits; Kolobok goes to the bathhouse, comes out and says: ‘Damn, forgot to wash my head!’ "

There is one about a bear - this one is a venerated classic. An inexplicable combination of magic and the absurd, compelling Russians to endlessly crack up.

"A bear is driving through the forest. He sees a burning car. He gets in… and burns!"

"The canned food is called ‘The Bear In His Car’."

Like all countries, Russians love a good old gag about mother-in-laws, who are mocked just as much as the “alcoholic husband,” “the rowdy neighbor,” and the stereotypical “housewife.” The image of the wicked mother-in-law, whom no one pities, has been immortalized. Often people (usually irate husbands) want to send her somewhere far away, or even wish death upon her. It’s difficult to explain, but in Russia such thoughts are not considered cruel. People laugh at this, and very loudly.

"The mother-in-law was buried. Two accordions were broken (meaning, from happiness)"

"The mother-in-law was buried. Two Pokémon were caught."

"There’s a burial procession. A bull ambles behind the coffin, and behind him a crowd of people.

- Who are you burying?

- He was the one who gored her to death.

- Good, he deserves it: Let that bastard see what he's done! The mother-in-law was surely a good woman so many people came to bid their farewell!

It is consoling that, despite all the jibes, everyone actually knows that mother-in-laws are indestructible:

"If suddenly there is a nuclear war, I am convinced that among the survivors there will be cockroaches and my mother-in-law…"

"An ad: Full-time DJ needed at the department for the war on drugs."

"A drug addict is sitting on the stairs, chewing seeds. One falls and he says to it, 'Come here!' The seed is quiet. He repeats, 'Come here, come back, quickly!' The seed is quiet. Then, enraged, he throws the rest of the seeds on the ground and says, 'Bring her to me!'" (You really do have to be Russian to understand this one - there’s simply no way to explain it)

"Two crocodiles are flying in the sky - a blue one and a red one, especially the red one."

"Two drug addicts are riding on a trolleybus. One approaches the driver and asks, 'Will this trolleybus take me to the station? - ‘No,’ the driver replies. The second drug addict: ‘And me?’ "

There is also no shortage of Russian memes on the Internet taking digs at addicts. Take a look:

There are also scores of jokes that flirt with folk wisdom while evoking the feeling of giving up on life. They are short, popular, and you can tell them one after the other - quickfire, for more laughs.

"So tell me, what have you achieved in life?  - The bottom."

"Simple instructions for creating a forever moving engine: Me and a rake."

And if you win a Russian's trust, they will surely give you a taste of some "toilet" humor. These jokes can often border on the incredibly offensive side of things - they’re not always politically correct:

"Maria Ivanovna, I don't have a ruchka (in Russian the word ruchka means both hand and pen)."

Vitya, how long will you keep babbling on about Vietnam!"