How the USSR and the U.S. saw the future on Earth and in space 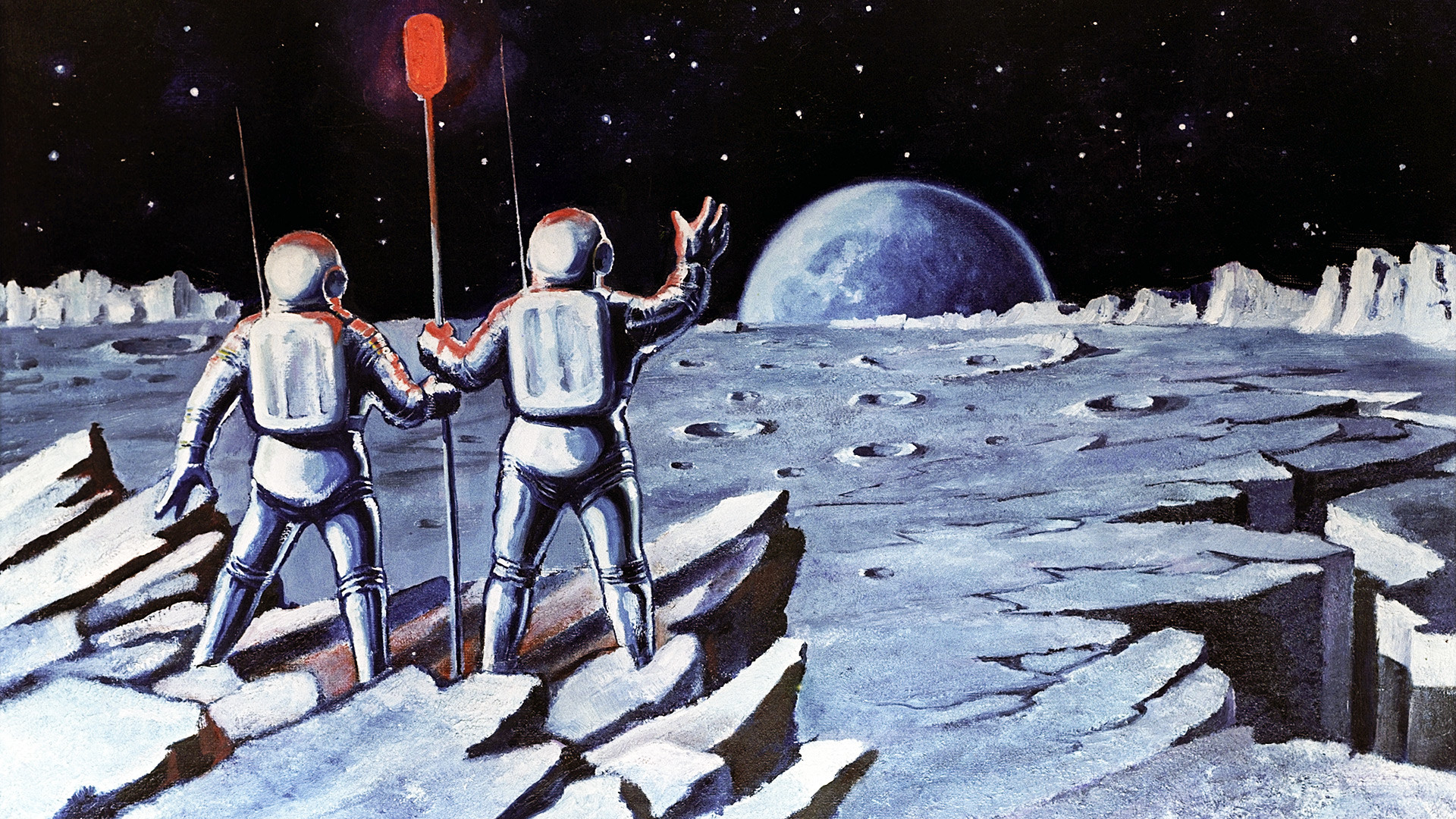 The artwork "Humans on the Moon" by Alexei Leonov, science fiction artist and Soviet cosmonaut.

Pavel Balabanov / RIA Novosti
Which parts of sci-fi films have become reality, and which still haven’t?

In the early days of the Soviet Union, science fiction films were not very popular. The primary subject matter at that time was revolution and five-year industrial development plans, not to mention World War II. Only starting in the late 1950s, when the space race between the USSR and the U.S. began, did the subject of space and thoughts of the future enter into the minds of film producers.

In the 1980s, works by science fiction writers such as Alexander Belyaev, the Strugatsky and Kir Bulychov were adapted to the screen. Today, these films are watched over and over by children and adults alike. In the 1960s-1980s many films in the U.S. were made about space and the life of future generations. What kind of life did the directors of that period predict for Soviet and American citizens? Let’s make a comparison.

Soviet people dreamt of space travel long before it became a reality. One of the first films in the country about the future, the silent film, Cosmic Voyage (1935), predicted a flight to the Moon in the summer of 1946. The flight is organized by the Tsiolkovsky Institute of Interplanetary Communication, (the scientist was a consultant on the film). Members of the first expedition to the Moon land on the dark side of the moon, where the terrain is rocky. 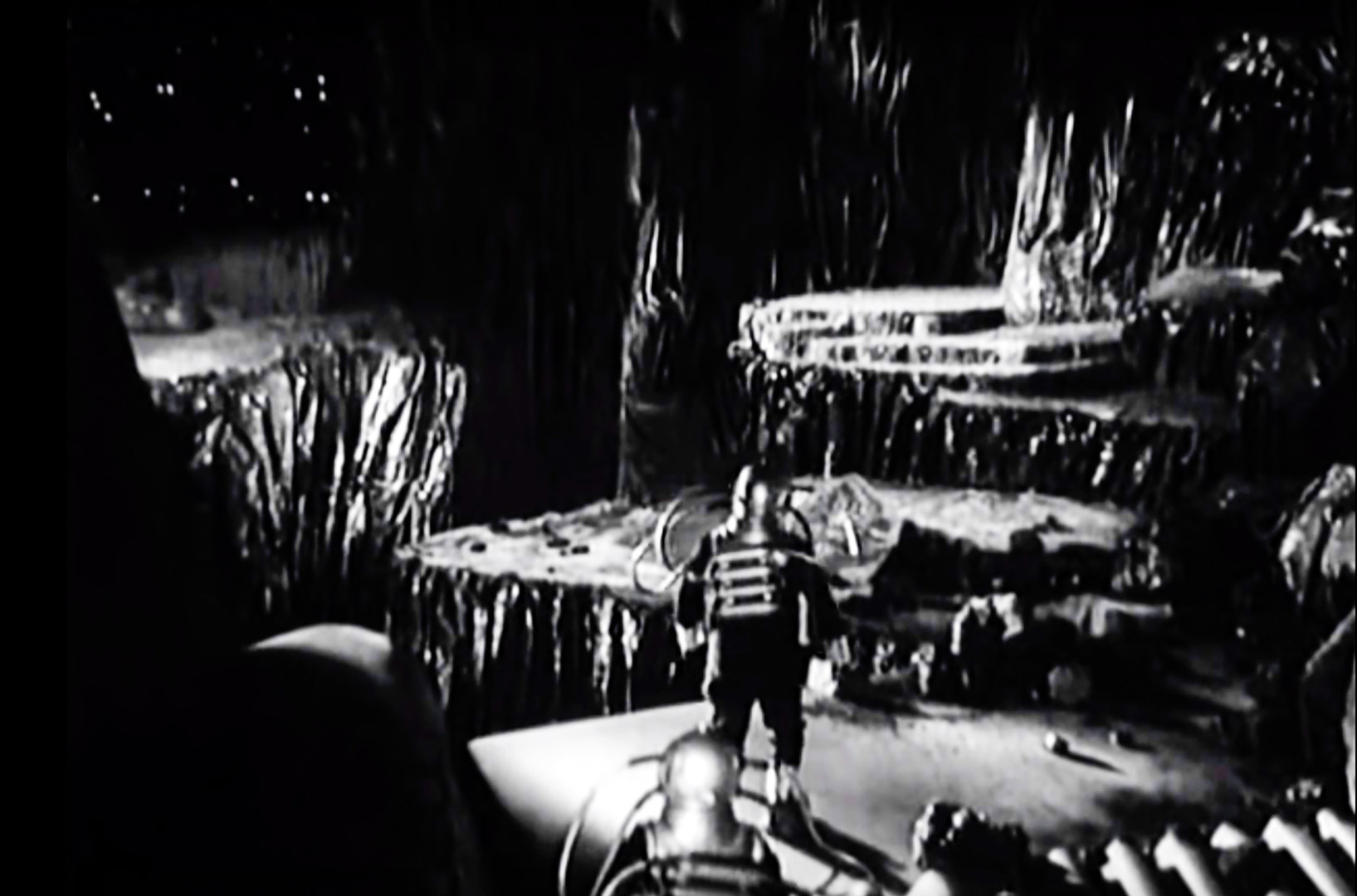 In the story, the protagonists lack oxygen, but they find “frozen remains of the lunar atmosphere” with which they solve the problem. A white cat, which was a passenger on a previous experimental flight, returns with them back home.

In 1950, the film, Destination Moon, came out in the U.S. This was the first color sci-fi film in the country. The main drama occurs during the attempt to return to Earth when the crew notices that the rocket is too heavy to take off. 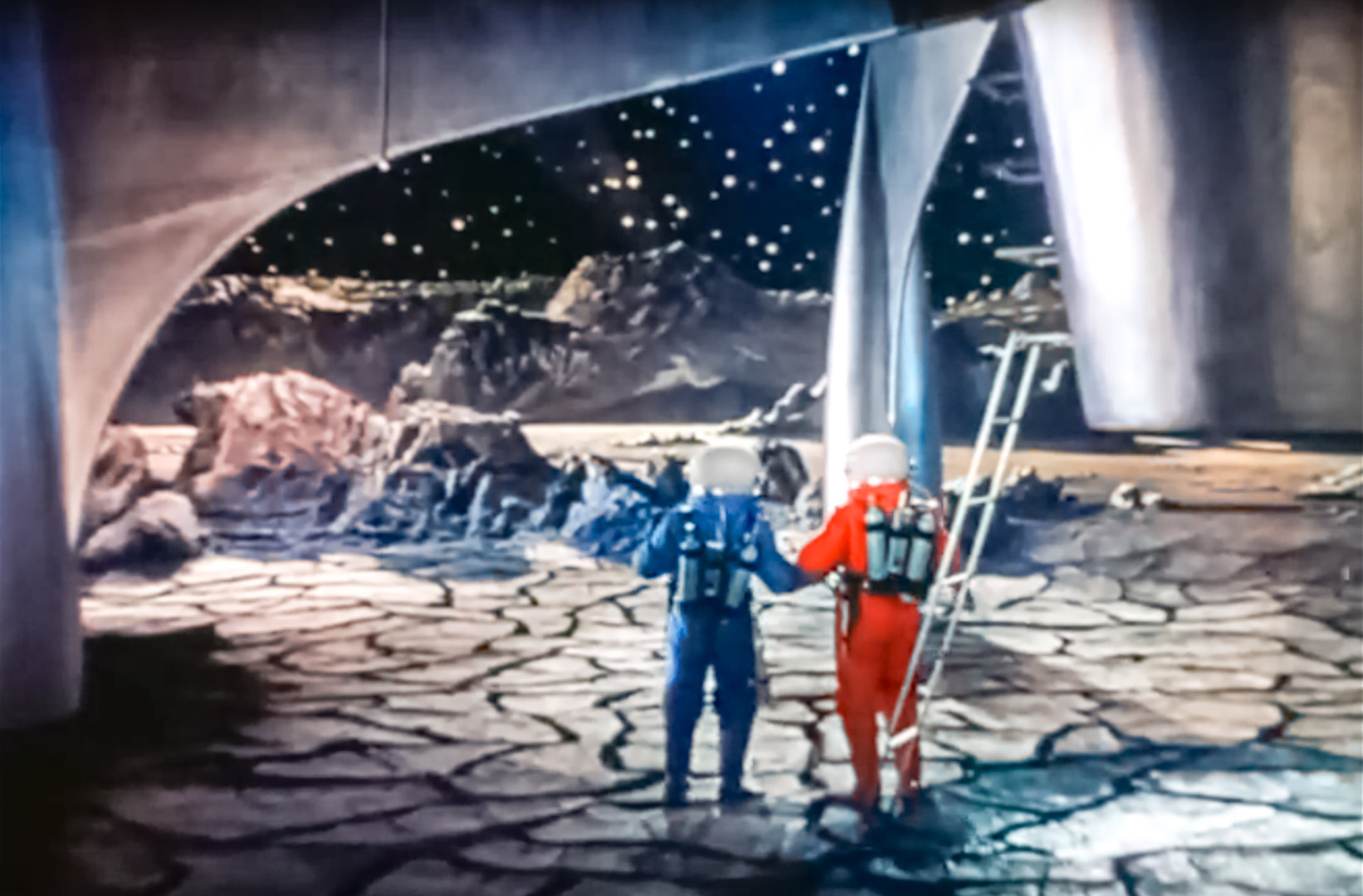 Unlike these films, which positively depicted space, First Men in the Moon (1964) is one of the first to depict human conflict with aliens, the Moon inhabitants, the Selenites.

Did it come true? Partially. The first humans landed on the Moon in 1969, and over the next three 12 U.S. astronauts followed. The last Moon mission was in December 1972, and no one ever found anyone or anything living there.

The space race between the USSR and the U.S. was the main topic in science fiction films in the 1960s. Scripts often copied each other. Thus, in 1962 the USSR produced Planet Bur, which was a joint U.S.-Soviet space expedition to Venus. The crew is forced to land on this planet, which is full of horrible dinosaur-like creatures. It was not very popular in the Soviet Union, yet 28 countries bought the distribution rights. In 1965, the U.S. produced a re-edited copy of this film, Voyage to a Prehistoric Planet. 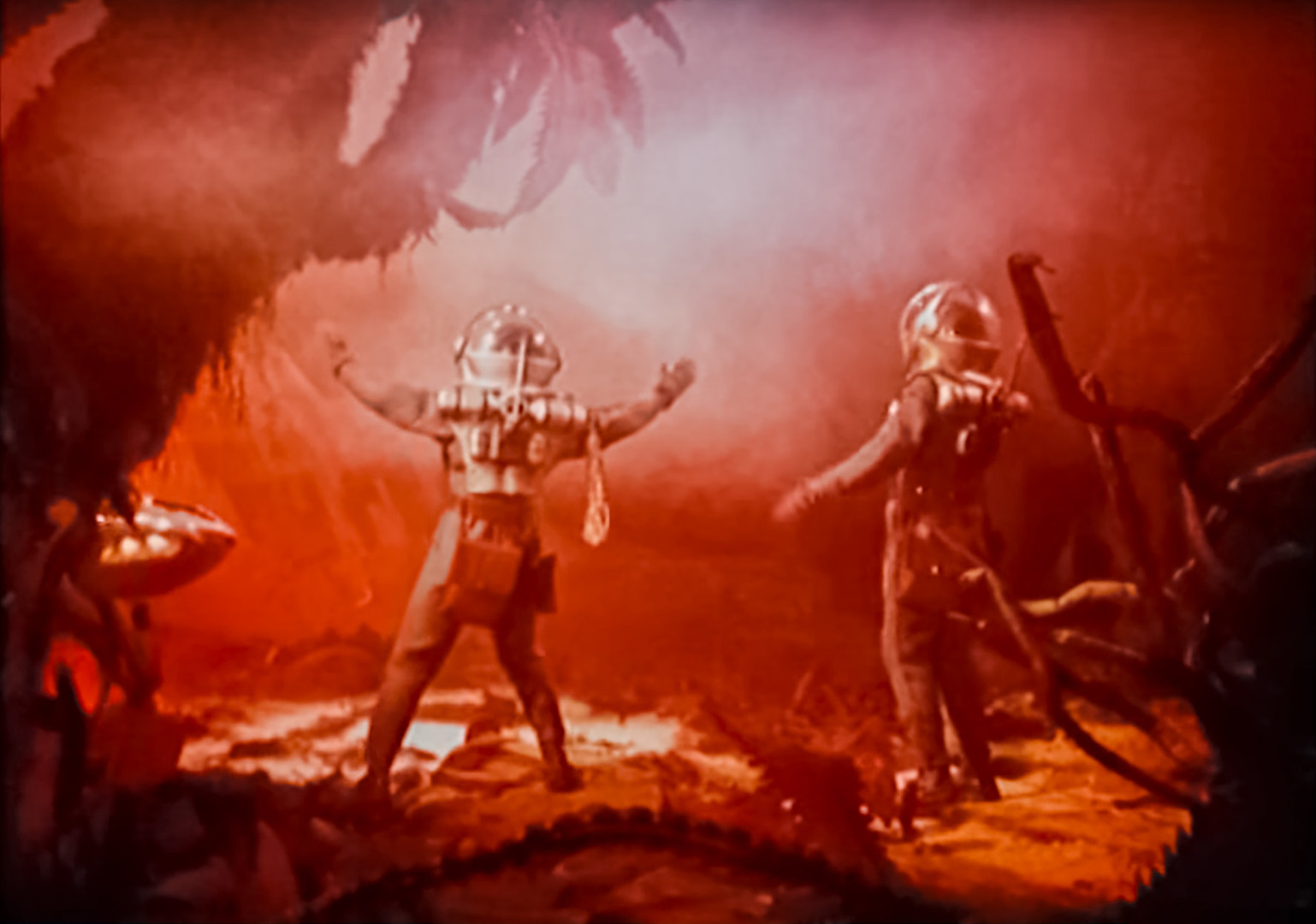 In addition to Venus, sci-fi filmmakers “sent” Russians and Americans to Mars, Uranus and other unexplored galaxies. In the 1967 Soviet film, The Andromeda Nebula, which is about the distant future, a spaceship becomes trapped by a star’s gravitational field. Some interesting details can be seen on the spaceship, such as a pool with a springboard.

Andrei Tarkovsky’s film Solaris (1972), based on Stanislaw Lem’s novel, presents a horrible vision of the future. The action takes place on a half-deserted space station, which is studying the planet Solaris and its ocean, capable of materializing man’s most terrible recollections, and the expedition’s participants lose their minds. In 2002, Steven Soderbergh shot his version of the story, revisiting Tarkovsky’s film.

Has it come true? For now, no. Roscosmos, and ESA plan to launch a piloted flight to Mars. In 2015, Russia held an imitation of flight Mars-500. In the U.S., several private organizations – Mars One, Space X, Inspiration Mars Foundation and – are promoting their initiatives for a Mars flight.

People in the 23rd century will not be amazed by cloning. A person, however, who can read thoughts and move objects at a distance, will certainly raise some eyebrows. At least this is what happens in the Soviet two-part film, Per Aspera Ad Astra (1980), for which Kir Bulychov wrote the screenplay.

Niiya, a girl who is found in one of the battered spaceships, can read people’s minds and also move about in space and live without oxygen on other planets. She does not remember who she is and where she is from. She only remembers that she has a mission – to save Planet Dess. 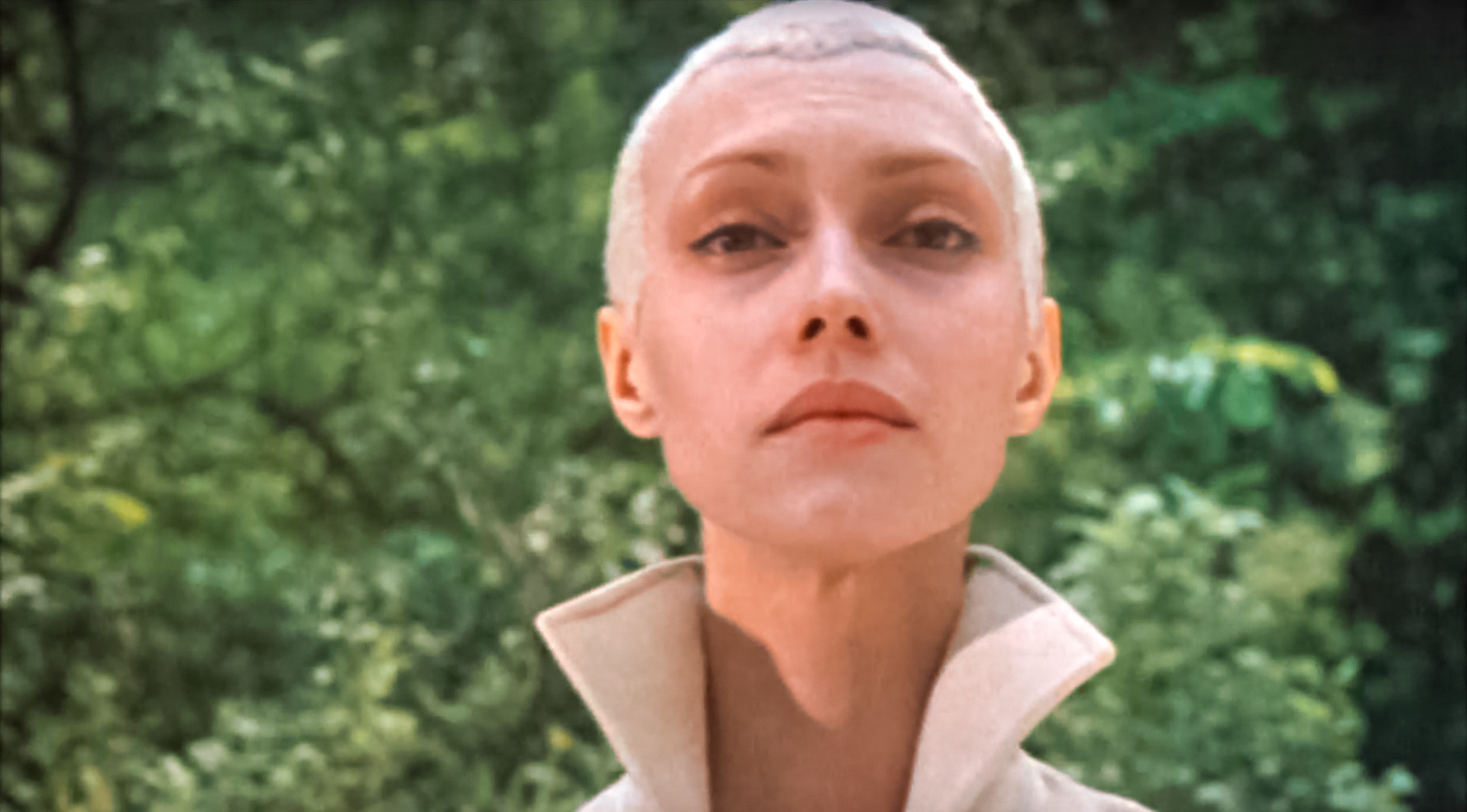 In Guest from the Future (1985) the protagonist is a teenage girl named Alisa Seleznyova from 2084. She reads people’s thoughts with the help of a special device, the , which space pirates are trying to steal from her. In 1992, a TV series was made in Australia with a similar storyline, The Girl from Tomorrow.

Has it come true? No. Cases of telekinesis and mind-reading are still more science fiction than reality.

The use of robotics and artificial intellect is a favorite topic today. However, not all robots were friendly towards mankind.

In the children’s two-part adventure film, Moscow-Cassiopeia/Teens in the Universe (1974), teenage cosmonauts find themselves on a planet inhabited by robots with artificial intellect. The robots realize that human emotions prevent the evolution of civilization and with the help of special procedures deprive all the people on the planet of their emotions. As a result, people stop reproducing and almost go extinct. Some survivors send signals to Earth, which are caught by Soviet schoolchildren.

In Guest from the Future (1985) Soviet schoolboy Kolya Gerasimov finds himself in 2084 and meets robot Werther, who is an administrator in the Institute of Time. Werther helps Kolya see the future, visit a cosmodrome and return to his era. 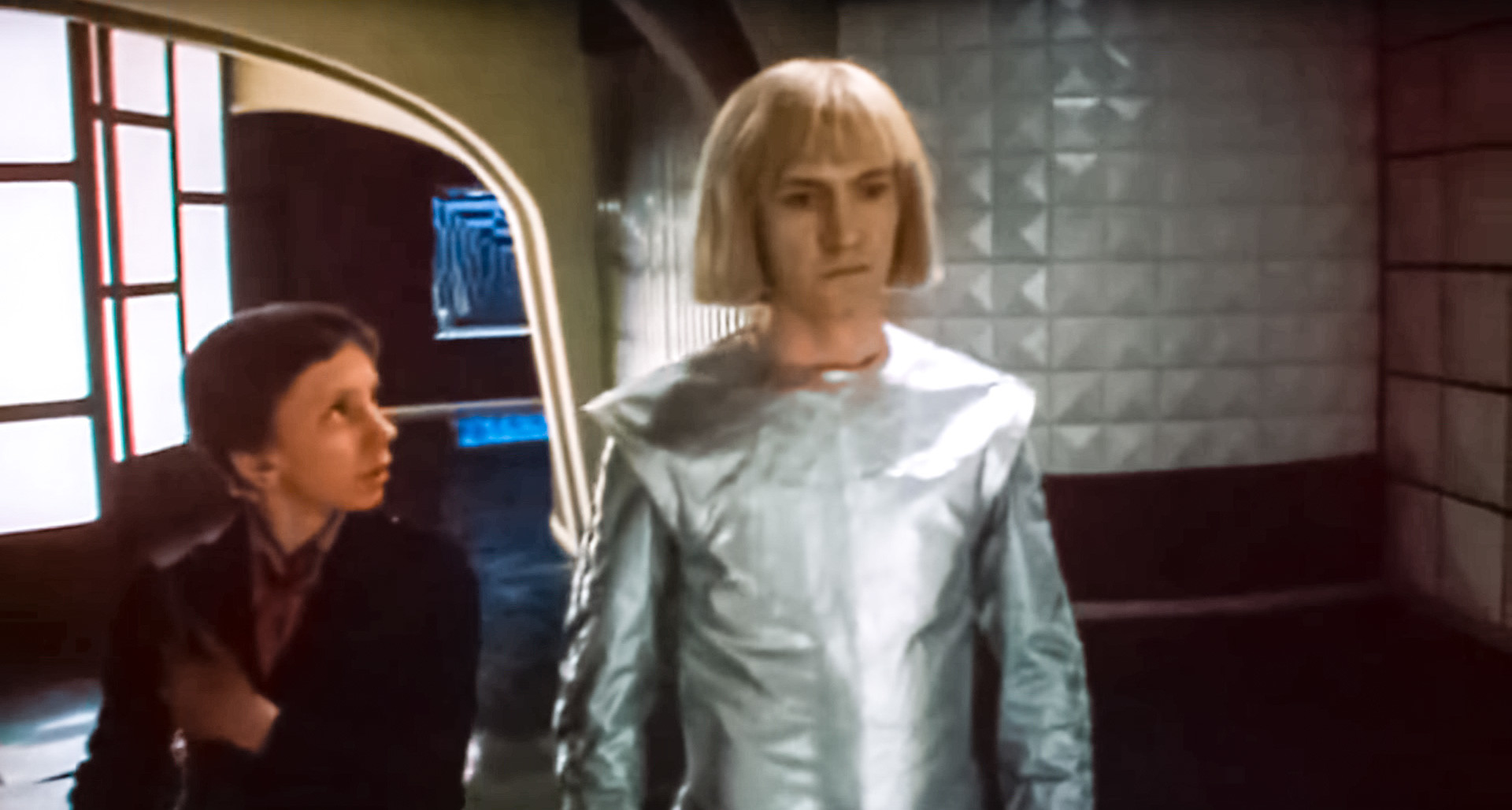 Guest from the Future.

Meanwhile, U.S. viewers watched Terminator (1984) about a different robot, a cyborg that came to 1984 from 2029. His mission is to kill Sara Connor, whose unborn child will win the war between man and machine. In the 1991 the robot changes and becomes good. He even knows how to smile.

Has it come true? Partially. In March 2017, robot-androids in Moscow gave women flowers, read poetry and paid them compliments. Another Russian robot, REDOR (Final Experimental Demonstration Object Research), will fly to space in 2021. In Japan, robots already work as presenters in expositions. Many countries are developing combat robots.

Extensive use of video communication is predicted in practically all Soviet and American sci-fi films. Skype and Facetime prototypes were shown in The Andromeda Nebula (1967), I Was a Satellite of the Sun (1959), 2001: A Space Odyssey (1968), and many others.

In the middle of the computers were cumbersome and were used only at work. Nevertheless, in some sci-fi we can see personal computers, which at that time were inconceivable. On the protagonist’s table in The Andromeda Nebula (1967), we see two cordless devices and something that very much resembles the modern notebook.

In that film there is also a very interesting find – a flight audio diary that appears as a rotating microphone in the form of a ring.

In Per Aspera Ad Astra (1980) you can see another fascinating gadget: a smart watch for communication. Today, something like this will not surprise anyone. Not to mention in the 23rd century. 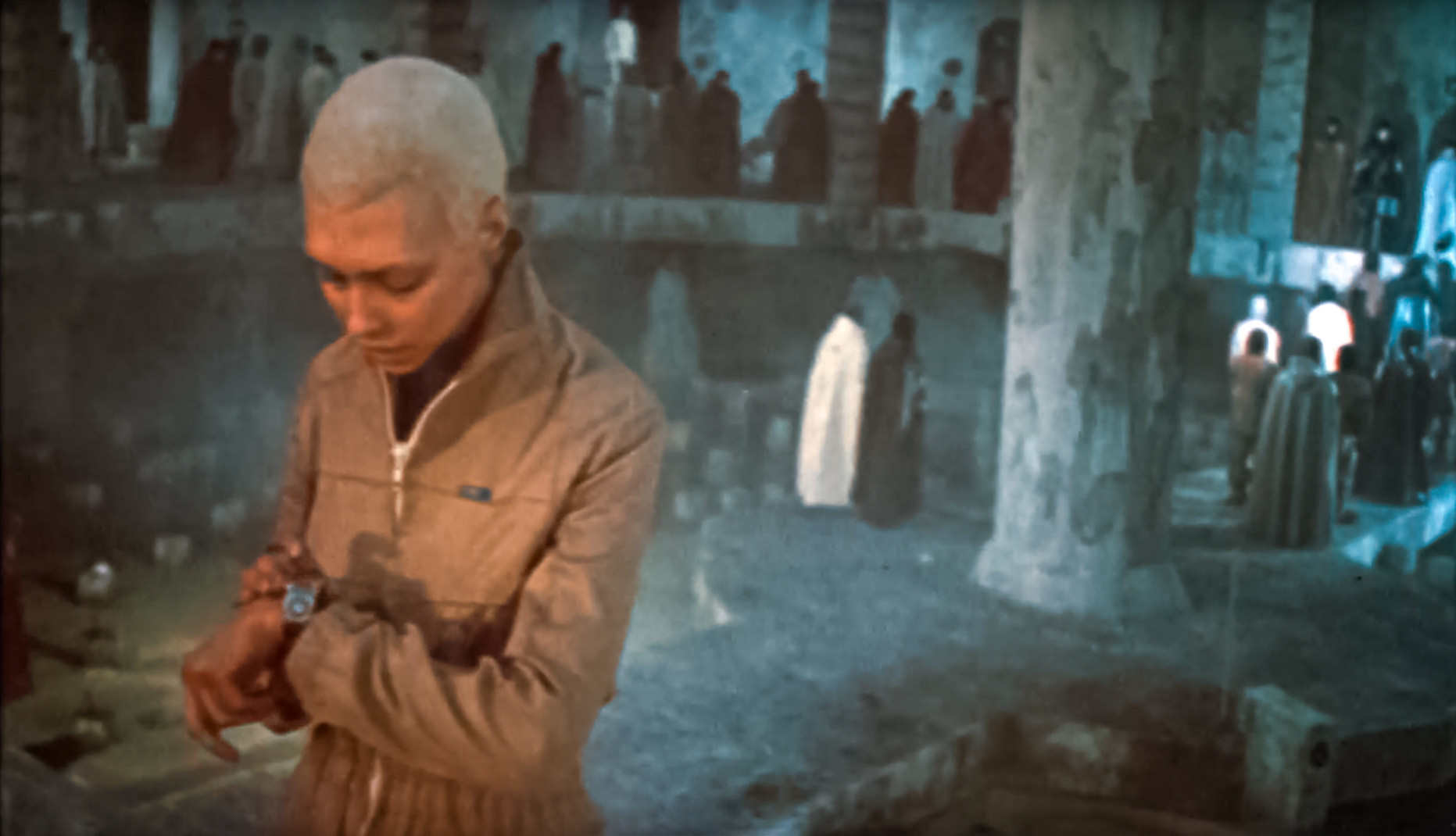 Unlike the USSR, the U.S. dreamt of personal television. The 1949 film, The House of Tomorrow, demonstrated a TV with three personal screens: for housewives, for and for businessmen. Meanwhile, the creators of Back to the Future 2 (1989) believed that by 2015 people would be able not only to watch several TV channels on one but also watch films with the help of virtual vision glasses. And also, the movie predicted the phenomenon of 3D films.

Has it come true? And how. Today everyone eats dinner looking at a smartphone. Soon, Google Glass will be integrated into smartphones.

When making films about the future, screenwriters and directors carefully thought about the environment surrounding the protagonists. Thus, in the we will live in cities full of skyscrapers, complex road and flying automobiles.

In 1935, Soviet citizens saw a monorail in a film. 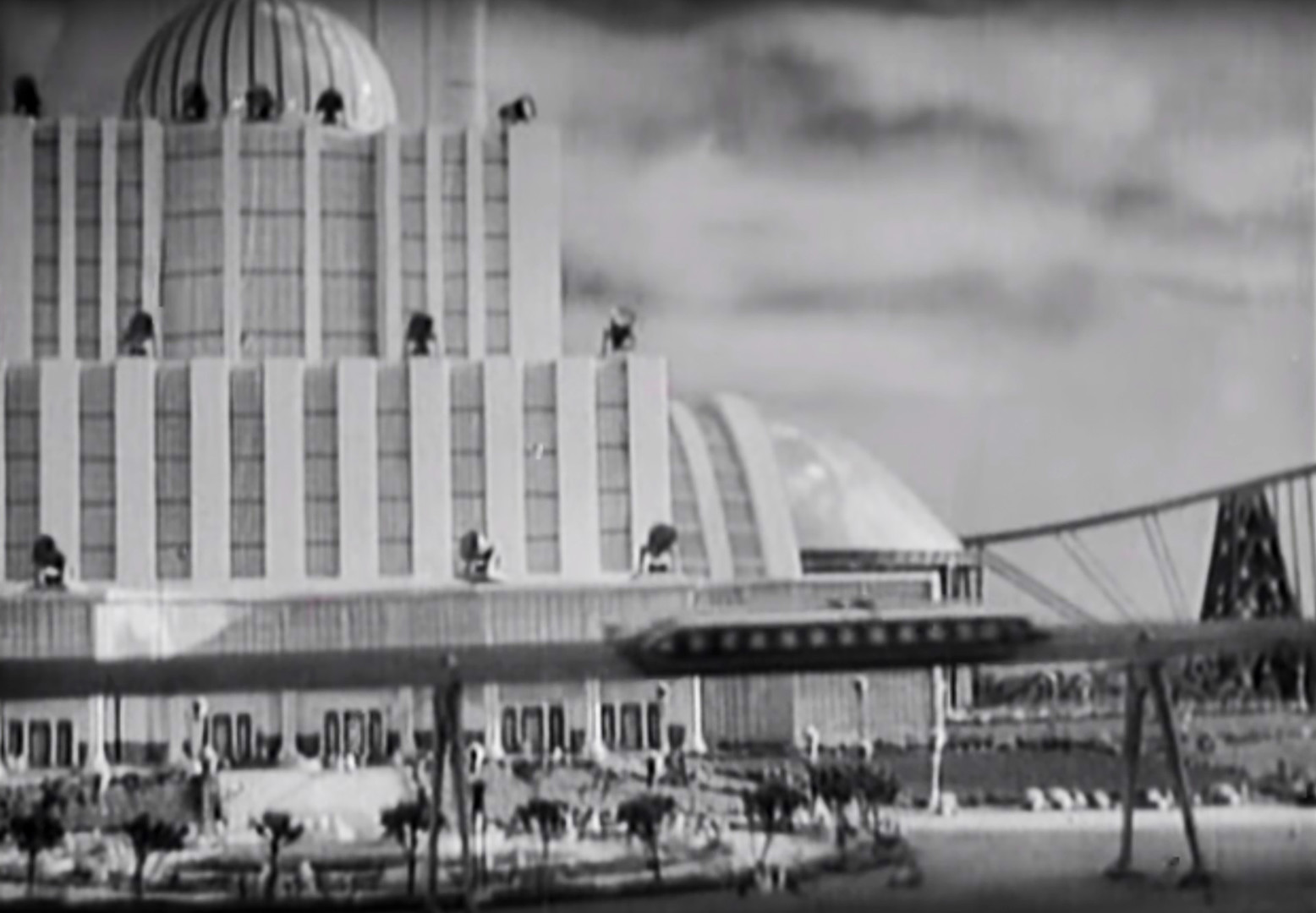 The Soviet film, Planet Bur (1962), shows a car with an anti-gravitational engine, and something like it can be seen in Star Wars, and Back to the Future 2 (1989).

American screenwriters thought that protagonists should have driverless cars. Remember how in Total Recall (1990) Arnold Schwarzenegger tries to explain to the robot taxi driver where to go?

Has it come true? Almost. Many cities have junctions. The monorail has been launched in many cities around the world, including a driverless one. Also, the first driverless cars are being tested by Russian and foreign companies.

Now we just have to wait and see when cars will start flying. Then, people can definitely forget about traffic jams. At least on Earth.