Bears on unicycles and wolf’s milk: How is Russia portrayed in popular American cartoons? 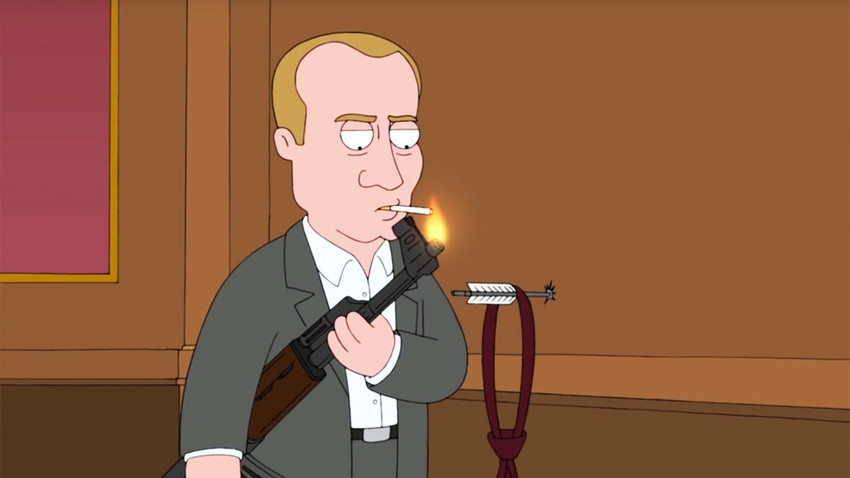 Family Guy Clippings / Screenshot / Youtube.com
Satirical U.S. animations love flogging a good old stereotype. When it comes to Russia, certain episodes leave one wondering just how many KGB and vodka jokes can be crammed into a 20-minute slot. Despite the animated depictions of Russia often being far from real, they can be pretty funny.

Many modern American cartoons Family Guy or South Park more than just entertainment for kids: They offer a satirical take the world, laughing at stereotypes and vices.

Of Russia is no exception: Bears, nuclear weapons, Gorbachev, Putin…they are all fodder for jokes in these programs. We’ve already shown you The Simpsons’ take on Russia - so let’s see how other cartoons portray the country.

For 20 years the show has been mercilessly taking the mickey out of the whole Universe and of it has mentioned Russia in several episodes. One of the most memorable featuring the Motherland is called “Free Willzyx” in which the four iconic kids try to send a whale to the moon.

Kyle calls the Kremlin to ask Vladimir Putin to launch a rocket into space. Putin and his assistants (one in a stereotypical fur hat) are shown deeply embroiled in an economic crisis, with sadness etched on their faces.

They rush to the telephone to speak with a “rich American who wants to fly to space” and happily agree to Kyle’s demands - for $20 million. However, the Russian leader becomes angry after Kyle says he doesn’t have the money, and that he also wants to send a whale into space - Putin shouts “Kiss my ass, George Bush, this is not funny!” and hangs up.

Here is a link to see the whole episode.

This show depicting the life of the Griffin family is famous for its absurd humor and seemingly random jokes that sometimes go on for while having nothing to do with each episode’s plot. The cartoon’s portrayal of Russia is equally bizarre. For example, in one episode Stewie is imagining his life in Siberia, where he is seen drinking wolf’s milk and watching a Russian cartoon called “Shoe and Shoelace” - which sadly doesn’t exist.

In another episode, a dog is sent into space in 1958 - much to the agony of its owner who knows it’s not coming back. But the dog ends up being fine after finding a happy dog planet and promising to “come back to Earth in 50 years and bite everybody.” In reality, Laika (a canine sent into space) died in orbit in 1957 but Belka and Strelka (two more space dogs) returned home in 1960 and lived happily ever after.

But the most Russia has received in Family Guy was in the episode when Stewie and Brian fight an evil Russian agent in Moscow, where they find bears on unicycles (oh God) and meet Putin - who turns out to be a nice guy!

Created by the same people who make Family Guy and similar in style,  American Dad! portrays the life of a yet another American family (the father is a CIA agent and their pet is an alien). In one episode they meet a new neighbor called Sergey who is obviously of Russian origin and an ex-communist...

The Smiths teach Sergey capitalism but this proves to be a hard task - ends up teaching Steve (the son of the family, a dorky teen) to harden his mind and become joyless - “like Russian turnip.” Steve eventually turns into a communist!

It turns out this was Sergey’s plan all along: Disappointed in his son who became an entrepreneur after the collapse of the Soviet system, Sergey plotted his revenge and moved to the U.S. to preach communism. He’s also an alcoholic who eats turnips...

BoJack Horseman, a satirical and tragicomic series, shows a world very close to ours but populated with both humans and anthropomorphic animals (the main character is a horse). Russian spies exist, naturally.

One story follows an agent called Alexander, who wakes up from a 30-year coma. He initially pretends to be friendly but tries to contact fellow KGB agents (who have all returned home by this point). BoJack - the horse - finds out the truth about him but no one believes him.

After accepting his situation, Alexander decides there is no need to fight the Americans: “I don’t need to take down capitalism! Capitalism sows the seeds of its own destruction!” he says and walks away happily.