5 Russian operas that every cultured person should know and see 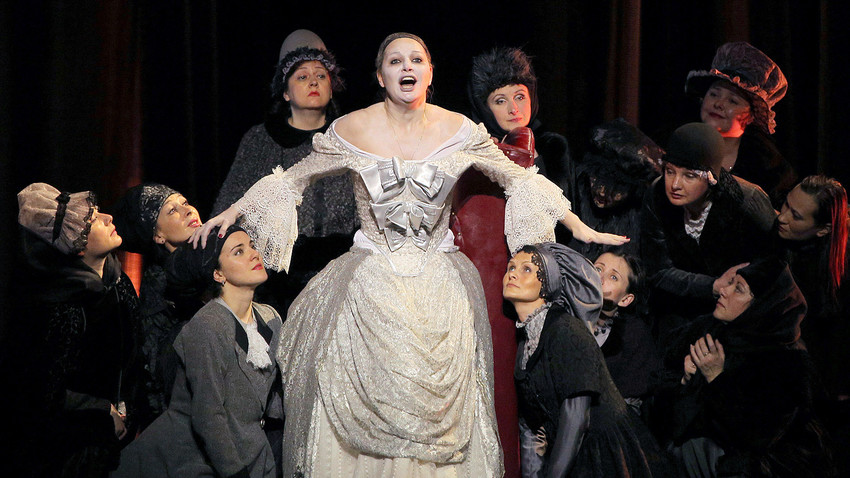 Ruslan Shamukov/TASS
While the Russian ballet has for more than a century enthralled audiences around the globe, the country’s opera heritage has only recently achieved worldwide acclaim.

Russian operas have always been difficult to perform – they require not only command of a difficult language but also powerful voices, nonstandard and a strong dramatic performance. Nevertheless, in the past two they have established themselves on the world stage and their popularity is growing. Russia Beyond chose five operas that are currently performed, or will soon be performed, in different theaters of the world.

In the history of Russian music Glinka is regarded as the first national composer and creator of the first Russian operas. Of course, there is a certain exaggeration in this claim. In the 18th century, music by Dmitry Bortniansky and Yevstigney Fomin were performed even in Italy. But the first Russian composers sought to master foreign traditions. Glinka appropriated it and used it to express the Russian spirit. Poet Alexander Pushkin gave Glinka the idea to write an opera based on his popular poem, and Lyudmila. But Pushkin died soon , and the writing of the libretto took much effort and a lot of time.

Despite the fact that the opera was much awaited, its premiere on the stage of the Bolshoi Kamenny Theater in St. Petersburg in 1842 failed to impress. Only gradually did the public come to appreciate this fairytale about life in Ancient Rus, as well as the elegance and inexhaustible variety of the melodies, the beauty of the orchestral instrumentation and the ingenuity of a large ensemble of soloists.

For more than a century Ruslan and Lyudmila one of the most popular titles in the repertoire of Russian theaters. Nowadays, it’s not only difficult to mount a production of a five-act opera, but it’s not easy to spend five hours sitting and listening to it. Nevertheless, a full house was guaranteed when Valery Gergiev was in charge of the production at the Mariinsky Theater and Anna Netrebko sang the part of Lyudmila, or when Dmitri Tcherniakov's staging of the opera was performed at the gala of the original stage of the Bolshoi Theater after years of renovations.

This opera has had six and many various orchestrations. It reflects the complex fate of Godunov and its creator, composer Modest Mussorgsky, who was inspired by Alexander Pushkin's eponymous poem and passages from History of the Russian State by Nikolay Karamzin. That famous book is devoted to Russia’s first elected tsar who ruled in the late 16th century and early 17th.

Mussorgsky needed a year to compose the four-act opera in 1869, and he was devastated when the Directorate of Imperial Theaters rejected it. Five years later, after numerous changes, Boris Godunov premiered at the Bolshoi Kamenny Theater in St. Petersburg, where it also failed to garner much success.

Godunov had its triumph in 1898 when it was staged at the Solodovnikov private theater in Moscow with legendary singer Feodor Chaliapin in the main role. There was an exceptional harmony between the powerful opera and the brilliant performer. Chaliapin also triumphed in the production of Boris Godunov in Paris when Sergei Diaghilev introduced the Russian theater to Europe for the first time. Since then, Mussorgsky's opera has become a phenomenon not only in Russian music but also in world music.

In June and July 2018, it will again appear on the stage of Opéra Garnier in Paris under the baton of Russian conductor Vladimir Jurowski in a production by Belgian director Ivo van Hove.

Queen of Spades is an astonishing opera primarily just 11 months passed from the moment when the composer penned the first notes to its premiere on stage. The 50-year-old Tchaikovsky wrote it in Florence in a villa rented for him by his benefactor, Nadezhda von Meck, on a wave of general appreciation and love. The source of his inspiration is tangible almost a century and a half later.

The opera was based on the eponymous story by Pushkin. But as was the case with Tchaikovsky's earlier opera, Eugene Onegin, his brother Modest, in writing the libretto, made significant changes to the personalities and motivation of Pushkin's protagonists, and made the conflicts more in line with melodramatic operatic tradition. From a cold and calculating cynic, Herman, the main character, was transformed into an ardent, amorous personality who falls prey to unbridled passion. Also, the setting of The Queen of Spades was transposed from Pushkin's time to the 18th century.

The premiere took place at the Mariinsky Theater in 1890. Almost from the it was acclaimed as a jewel of the Russian repertoire, and its arias and other pieces were played at musical evenings in concert halls and domestic salons. In 1902, Gustav Mahler staged it at the Vienna Court Opera, and in 1904 the young Sergei Rachmaninoff conducted The Queen of Spades at the Bolshoi Theater in Moscow. Since then the opera has scarcely been absent from the playbills of leading Russian theaters, and abroad it has become the most successful and widely-recognized Russian opera.

fate of this opera became a symbol of the relationship between art and authority in the Soviet years. The premiere of Lady Macbeth of the Mtsensk District, which is based on themes from a novel by Nikolai Leskov, was a triumph for the 26-year-old composer. Performances were staged almost simultaneously by Leningrad's Maly Opera Theater (today the Mikhailovsky Theater) and Moscow's Nemirovich-Danchenko Music Theater, with the final tally running to 200 performances.

In 1935, Lady Macbeth was staged in Cleveland, Philadelphia, Zurich, Buenos Aires, New York, London, and Stockholm. The year ended with a premiere at the Bolshoi Theater, which was visited by Joseph Stalin. In January 1936 the country's main party newspaper, Pravda, published an article titled "Muddle Instead of Music," which excoriated Shostakovich's "naturalism." The article was unsigned, but many people detected the style of Stalin.

Although the composer was not arrested or shot, Lady Macbeth disappeared from the Soviet stage for a long time. While performances were held in Venice, Zagreb, and Poznan, in the USSR even Stalin's death could not change anything. Only in 1962 could the Stanislavski and Nemirovich-Danchenko Music Theater stage a second, toned-down and less audacious version. It was renamed Katerina Izmailova.

The original version of Lady Macbeth of the Mtsensk District returned to Russia in 1996 when it was staged by the Mariinsky Theater in St Petersburg. In 2004 the Bolshoi followed suit, catching up with the rest of the world, and today Shostakovich's opera remains one of the most popular in the Russian repertoire and is performed on the most prestigious stages.

Russian stage has always preferred epic historical drama to lyrical intimacy. The inspiration for Sergei Prokofiev's masterpiece was the eponymous novel by Leo Tolstoy, although it also uses other sources, and the libretto incorporates verses by Russian poets of the 18th and 19th centuries.

The composer, who was always noted for his rapid work style, conceived War and Peace in the spring of 1941. In April 1942, the piano score was ready, and in the autumn, as the Second World War raged, work began to stage the mammoth opera at the Bolshoi Theater in 13 scenes.

The topical significance of the subject and the sheer scale of the score led to numerous revisions. The composer suggested to theaters that it be staged over two evenings, and in 1946 the first part premiered at Leningrad's Maly Opera Theater, which was known as the "laboratory of Soviet opera." But a government decree relating to Vano Muradeli's opera, The Great Friendship, blocked the staging of the second part of War and Peace. Although 1947 saw the European premiere of the original version in Prague, the composer himself did not live to see a full-scale stage performance of War and Peace.

The opera was finally staged by the Maly Opera Theater in 1955, by the Stanislavski and Nemirovich-Danchenko Music Theater in Moscow in 1957, and the Bolshoi in 1959. Although Prokofiev's epic requires dozens of solo performers and enormous choirs for the battle scenes, it is staged today the world over – from Florence and to Sydney and Buenos Aires.