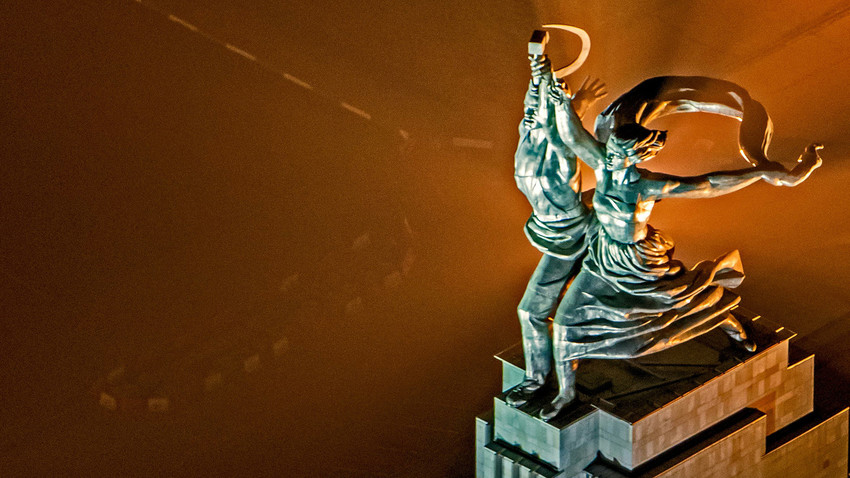 The Worker and Kolkhoz Woman sculpture, designed back in the 1930s, still is among iconic destinations of Moscow

Serguei Fomine/Global Look Press
2017 not only marks a century since the October Revolution, but also 80 years since the creation of one of its most recognizable symbols. The ‘Worker and Kolkhoz Woman’ sculpture was created as a foil to Nazi Germany, but the artwork had a rough ride in Russia before finally cementing its place in VDNKh.

United they stand – a muscular man in overalls and a…well, muscular woman in a sundress, holding a hammer and a sickle in their hands. The Worker and Kolkhoz Woman monument erected to symbolize the eternal union of the working class and peasantry in Soviet Russia.

And, as well as actual workers and peasants of the USSR, this stainless steel couple have been through a lot:

The statue was created by Vera Mukhina, the master of socialist realistic sculpture, for the 1937 World Fair in Paris. It was the first time the Soviets were invited to such an event so the government (namely Joseph Stalin) was keen to make a big splash.

While working on the Soviet pavilion, which Worker and Kolkhoz Woman meant to crown, Mukhina and the architect Boris Iofan were inspired by the sculptural pairing of the tyrannicides Harmodius and Aristogeiton – the Greek duo who murdered a Persian tyrant and brought democracy to Athens. 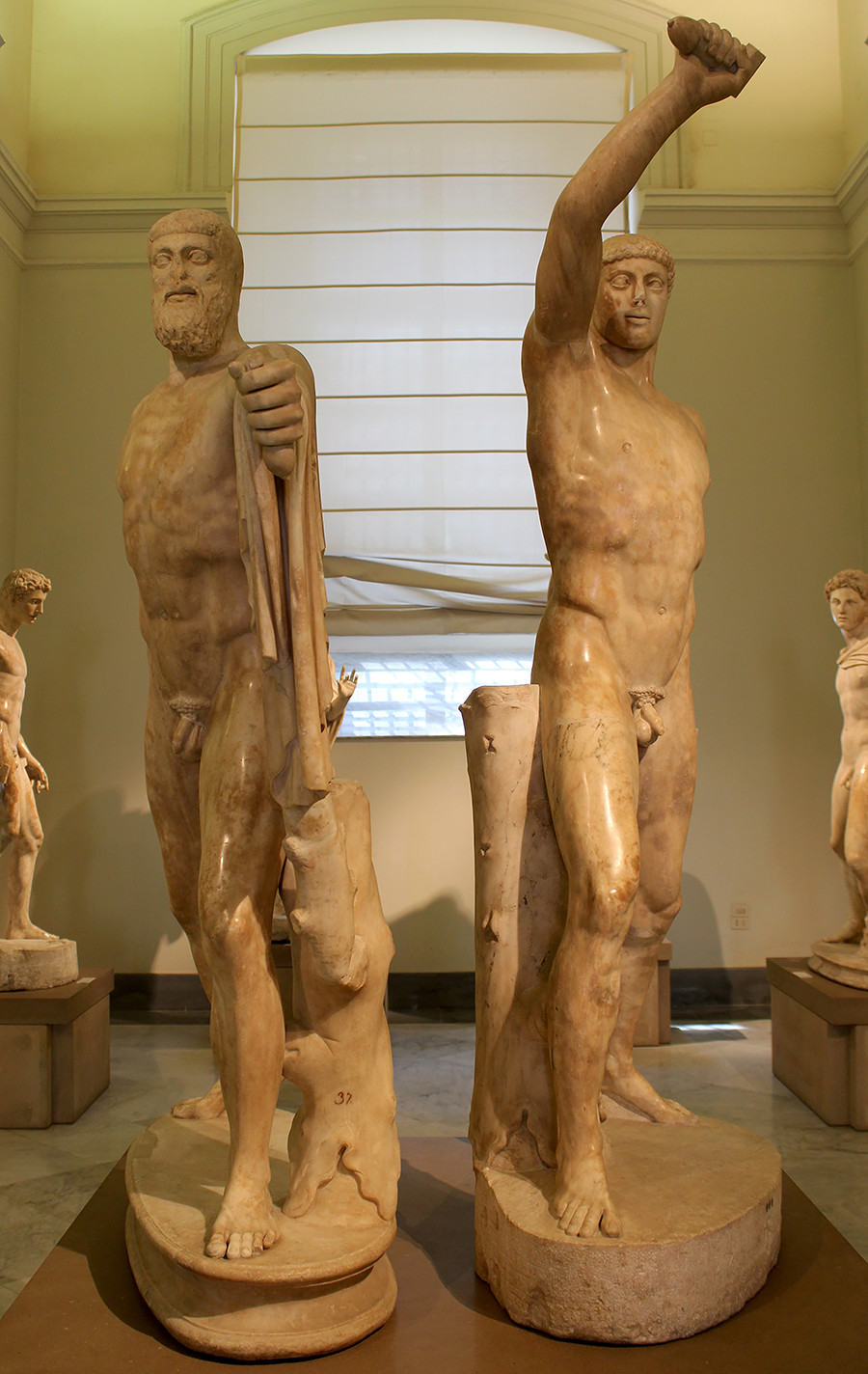 The statue of 'the Tyrannicides' which inspired the creators of Worker and Kolkhoz Woman. Roman copy of the Athenian version.

Worker and Kolkhoz Woman, in turn, should represent the socialist state emerging victorious over the whole planet. As Iofan would later write, the architectural ensemble itself was expected to be the main Soviet exhibit. And so it was.

An almost anecdotic event occurred while Mukhina was working on the monument: A hostile engineer wrote to Stalin, trying to denunciate her, claiming that she had secretly depicted Leon Trotsky’s face somewhere in the gathers of the Kolkhoz Woman’s dress.

Absurd as it sounds, it was a serious claim back then. Stalin’s Great Purge was on the rise in 1937 so Mukhina could have faced serious trouble if this had been true. But it wasn’t. The officials examined the statue meticulously and found no traces of Stalin’s archenemy. Everything turned out fine.

3. Rivaled by the Third Reich monument

During Paris’ World Fair, the main struggle unfolded between the two future enemies of WWII: The USSR and Nazi Germany. The two monumental pavilions of the authoritarian states were placed directly opposite each other on the main pedestrian boulevard at the Trocadéro. It was a stare off! 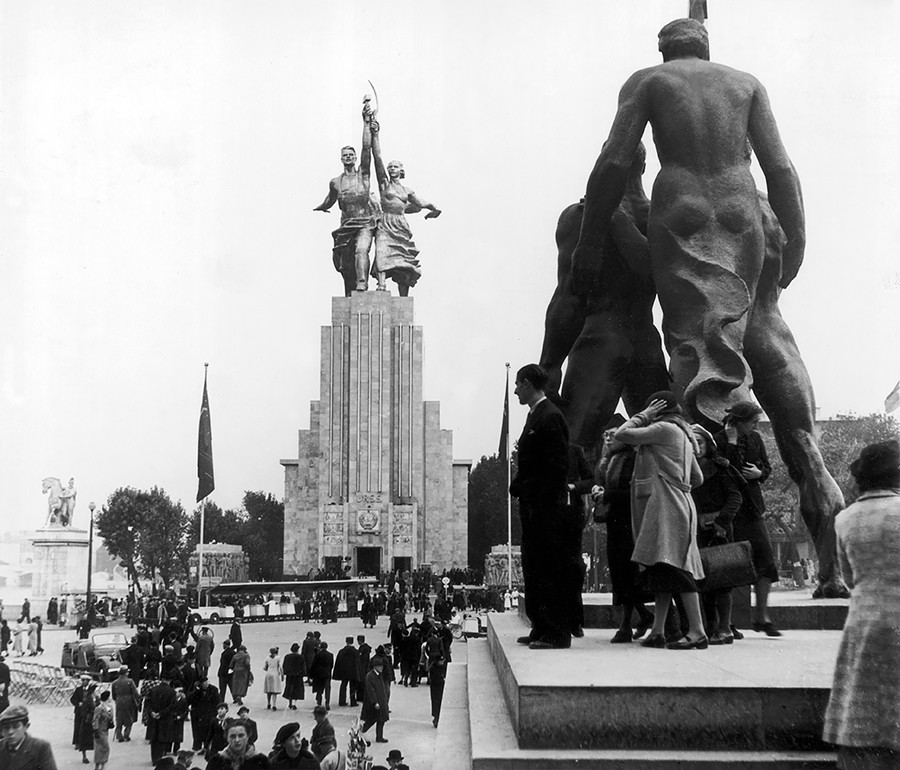 Soviet and German pavilions facing each other directly during the 1937 World Fair in Paris.

The German pavilion, designed by the infamous Nazi architect Albert Speer, resembled a giant “III” (Third Reich) crowned by an eagle with a swastika. Symbols of Soviet Socialism and German Nazism were facing off, literally – a touch of French humor from the World Fair’s administration.

Some critics praised the monumental masterpiece of Mukhina and Iofan, but some were skeptical, calling it “faceless modernism.” Nevertheless, both Soviet and German pavilions won the grand of the Fair – a tie.

4. Placed where it did not belong

After the fair was over, Worker and Kolkhoz Woman went home. But a problem awaited: As they were separated from their gigantic pedestal in France, the Russian government had to find somewhere to place the 24.5-meter tall statue.

Firstly they considered erecting it at the Rybinsk Hydroelectric Station on the Volga River, then thought about Sparrow Hills (Vorobyovy Gory) in Moscow where it could be seen from basically the entire city. But these ideas didn’t work out. 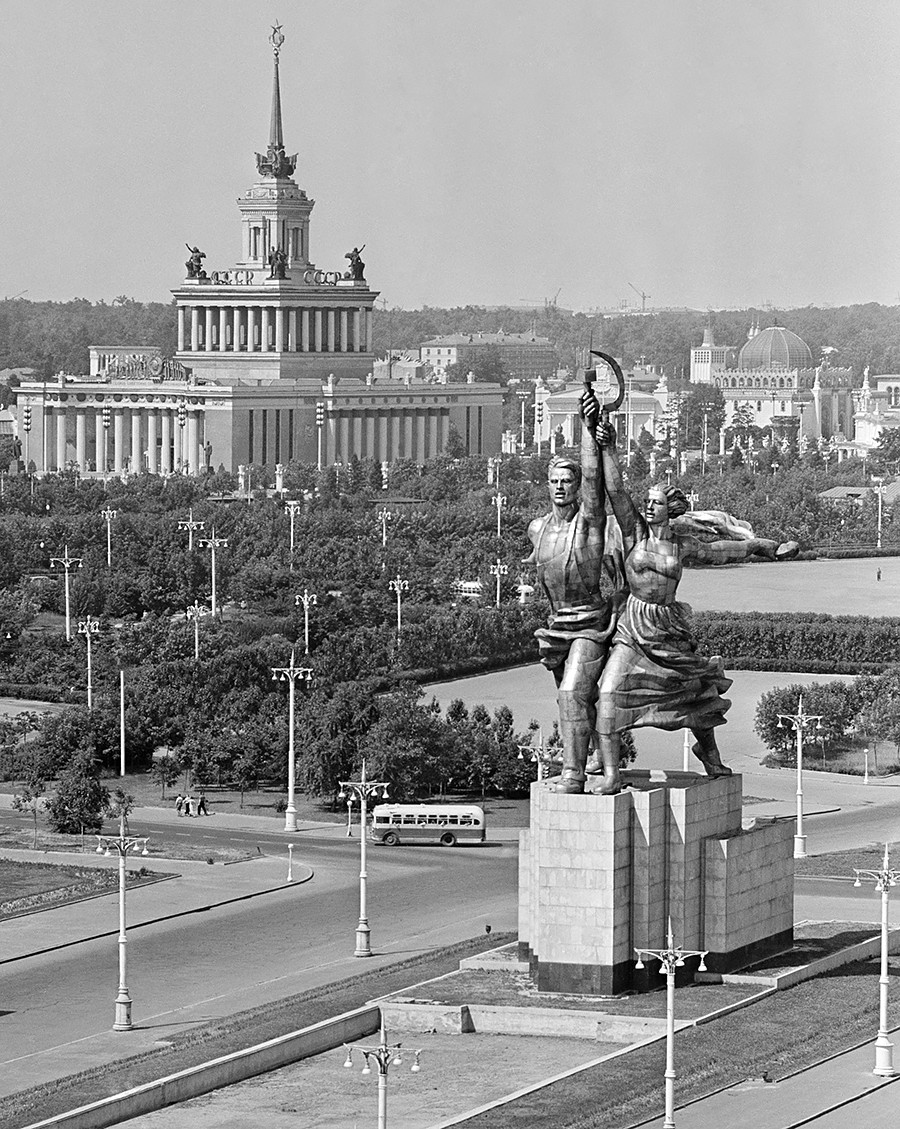 A view of Worker and Kolkhoz Woman monument (front) by Vera Mukhina and Central Pavillion (background) from the side of Mira Avenue, 1959. Mukhina was very displeased with that view.

In 1939, during the opening of VDNKh (Exhibition of Achievements of National Economy) in the Russian capital, the statue was placed in front of entrance, on a relatively small pedestal which was three times lower than the one in Paris. Mukhina was outraged by this decision, calling the new pedestal a “stump” and saying the beauty was such a low level.

5. Became a cinema symbol and got a new pedestal

Though it hardly consoled Mukhina, her sculpture became an official emblem of the Mosfilm cinema studio in 1947. Since then every Soviet film made by this studio is introduced by a logo of a man and woman holding a hammer and sickle. 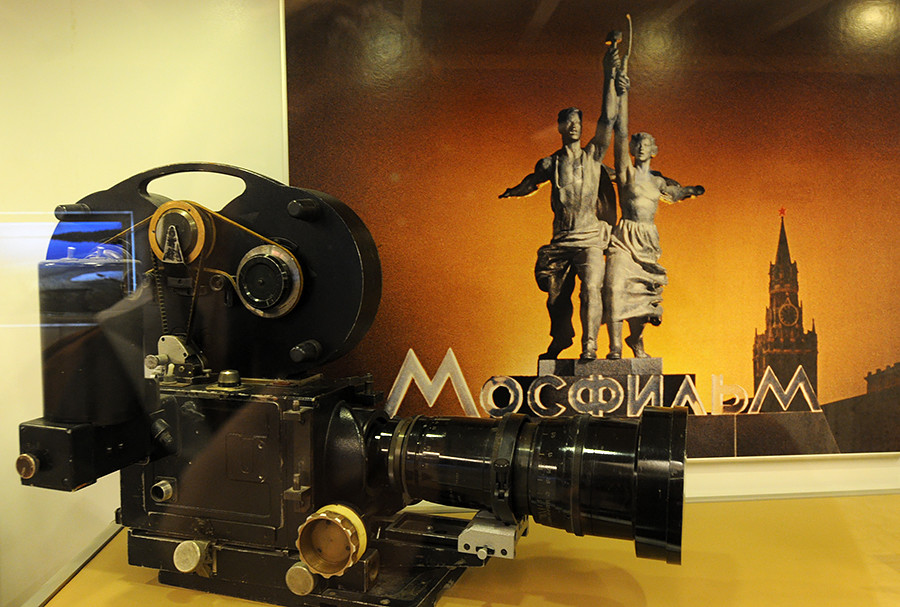 In 2003 the sculpture was cordoned off while repair works took place, and only in 2010 was it unveiled once again – and it finally got a higher pedestal (34.5 meters, 10 meters higher than the previous one), taking the total height to 58 meters: The fifth tallest statue in Russia. Now everyone can enjoy the beauty of this steel couple.