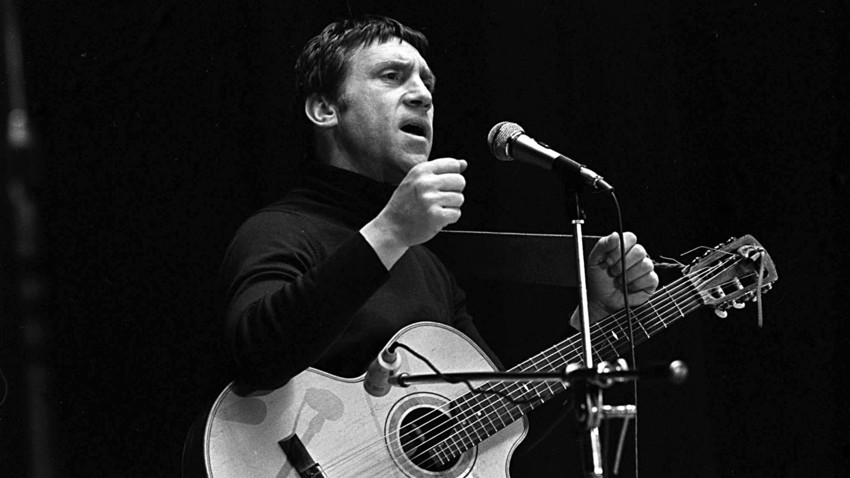 Vladimir Vysotsky performing in Yaroslavl in 1979

TASS
He was a sex symbol, the Soviet Kurt Cobain whose star burned brightly and was soon extinguished. Unique in all ways, you won't confuse Vladimir Vysotsky’s voice with any other: It will sear your soul.

Born into a poor family in Moscow in the turbulent year of 1938, Vladimir Vysotsky went on to become a very talented singer, songwriter actor. Among his best roles in cinema the police captain in the TV series, The Meeting Place Cannot Be Changed; the White Army officer in Two Comrades Were Serving Don Juan in Little Tragedies. His most famous theater role was Hamlet at the Taganka Theater, Moscow's progressive stage in the 1960s-1970s.

Everything Vysotsky did – whether performing in the theater, or singing, or just living - he did with , which is defined as a very strong tension encompassing all of one’s feelings, emotion vital force. He died rather young at the age of 42, at the height of his fame. Sadly, he had a dark side, and his life was marred by alcohol and drugs. On Jan. 25, he would have turned 80.

His life was much like that life of a Hollywood movie star. He always had expensive cars, fashionable leather jackets, and of course, the most beautiful women. His last wife was French actress Marina Vladi – being married to a foreign woman was something that all Soviet men were envious of.

Vysotsky composed nearly 600 songs, which he performed playing his guitar. Here are a few that are still popular and that for sure reflect the mysterious Russian soul.

"Better than all the mountains is the Mount,
Which nobody has mounted yet!"

This phrase is now an aphorism in Russia. It’s a song from the movie Vertical (1967), where Vysotsky played one of the leading roles and performed several songs. He says that every time people leave the mountains, they leave their hearts there. And each time they feel sorrow when leaving the mountains, there’s nothing one can do because " sometimes even gods descended to Earth."

This song is a kind of anthem for Russian alpinists and backpackers. So, next time when you're in the mountains, take a guitar and sing this song when sitting around the campfire. Here’s an English translation of the entire song.

“I don’t like when a stranger reads my letters
Glancing over my shoulder.”

This is an interview with Vladimir Vysotsky, and with this song, I don’t like (1969), he tried to explain to journalists his life credo.

Generally speaking, he doesn’t like the things that a strong and honest man wouldn’t stand for: rumors, extreme self-confidence, when someone stabs you in the back and when someone tries to get inside your soul. He feels anger “when innocents suffer,” and isn’t happy with himself if he acts cowardly.

“But my horses are so wayward, so hard to please,
Leaving no time for a life, for a song...”

This song is an imitation of ancient Russian tunes and contains even motifs from an old gypsy romance. That’s one of the best examples of  with which Vysotsky used to sing. This is the lyric story of a man who feels death is close, and he screams: “run slower, my horses, run slower.” He wants to live a little longer; “Let me stay on the brink”.

Take a look at the episode in the movie, White Nights, where Mikhail Baryshnikov dances to this Vystotsky song.

“If you’re in your apartment,
just lay down on your carpet!
One-two-three! Complete correct movements!”

Alongside serious songs full of anguish, Vysotsky also composed cheerful ones, such as “Why Did the Savages Eat Captain Cook,” or “A letter to ‘Incredible But True’.” “Morning Gymnastics” (1968) is probably one of his most famous funny songs.

Find the song's English translation here, and try a gym workout in the Soviet style.

“So, agree with the heaven hut, what for more,
If the palace is taken by others!”

As a man of deep thought and Vysotsky also wrote romantic songs. This song that the author dedicated to his wife Marina will make you cry. The lyrical hero sings to his lady that he'll take her away even from a magic forest, even if Mother Nature tries to stop him.

Read the full text of the song here.

If you want to know more about the soundtrack to the Russian soul, listen to 11 songs that explain everything.