8 Russian books to help you find the meaning of life 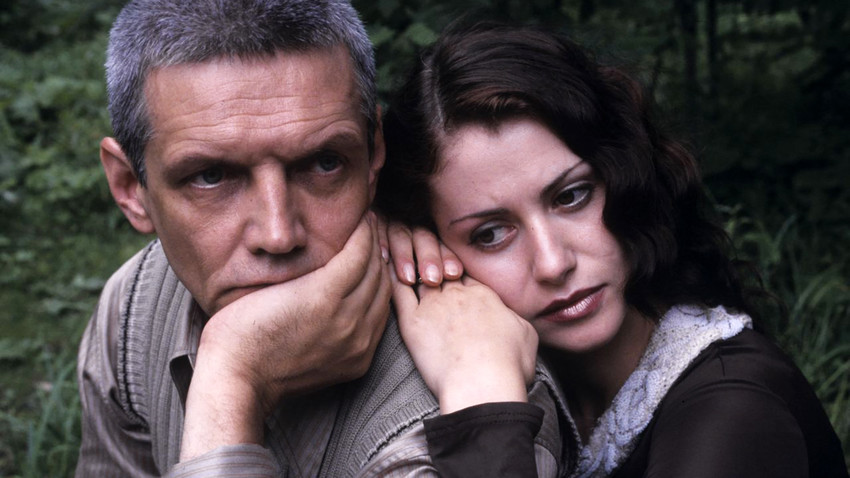 Goskino, Telekanal Rossiya
Russian writers are masters in discussing the big questions of human existence. So if you are looking for answers, take a look at these books. At the very least, you'll find meaning in the process of reading them.

In his book, Man's Search for Meaning, Auschwitz survivor and psychiatrist Viktor Frankl insists that a man can survive any form of suffering if he has in his life. One only has to find this meaning, even if you're alone in the universe.

If you read any classic Russian novel of the 19th century then you'll certainly find characters who think much and are in search of their mission on Earth. Many find meaning in various kinds of service – to God, society or family. 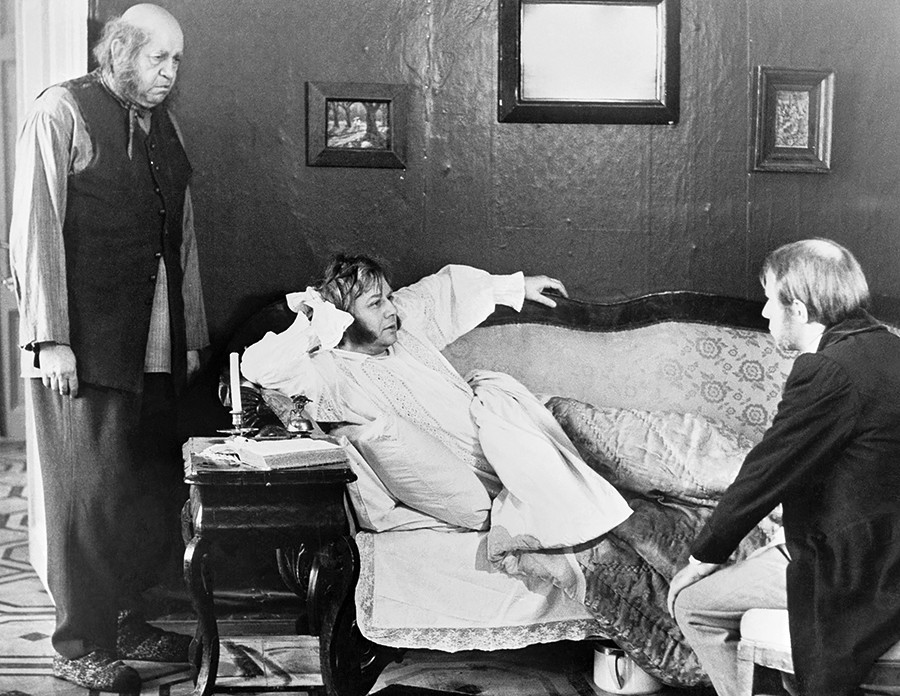 Laziness idleness were Oblomov’s defining traits, and his life was absolutely pointless. Lying on the sofa for many years, he became a metaphor for and even an aphorism. His opponent, Andrey Shtolts, is ambitious and finds meaning in self-improvement and self-realization. But his behavior becomes mechanized, and he can’t feel real love. As a result, in his quest for success and prosperity, Shtolts also lacks fundamental human values.

The only strong and honest person in the novel who can love is Olga, the woman who managed to drag Oblomov out of his comfort zone. And that’s what he eventually says about love and his vision of life: “Poor angel! Why does she care for me so much? And why am I so fond of her? Better that we had never met! It's all Schtoltz’s fault. He shed love us as he might have shed a disease. What sort of life is this? Nothing but anxiety and emotion! How can it ever lead to peaceful happiness and rest?” 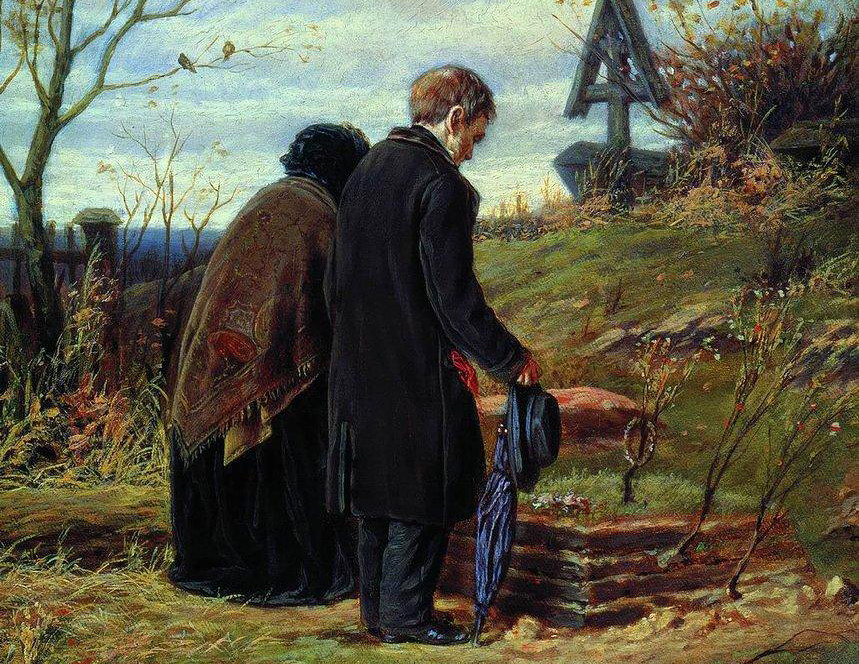 'Old Parents Visiting the Grave of Their Son,' 1874. The painting's plot was probably taken from Turgenev's novel

Turgenev was the first to declare the eternal problem of fathers and sons: the elder generation will never understand the younger. The main issue on which their opinions diverge is a different view on the meaning of life.

The elder generation sees love, happiness, enjoying art and nature among life’s most important facets. Sons reject the “old world,” even reject love and want to devote themselves to something useful. The main character is the nihilist Bazarov who wants to become a doctor. He is ready to give up love to avoid becoming a slave of passion.

When his beloved, Anna Odintsova, asks what future he sees for himself and who he actually is, he only says that he's a doctor. He intentionally doesn’t discuss the greater purpose of life, because you don’t need “these abstractions”... to put a piece of bread into your mouth.” 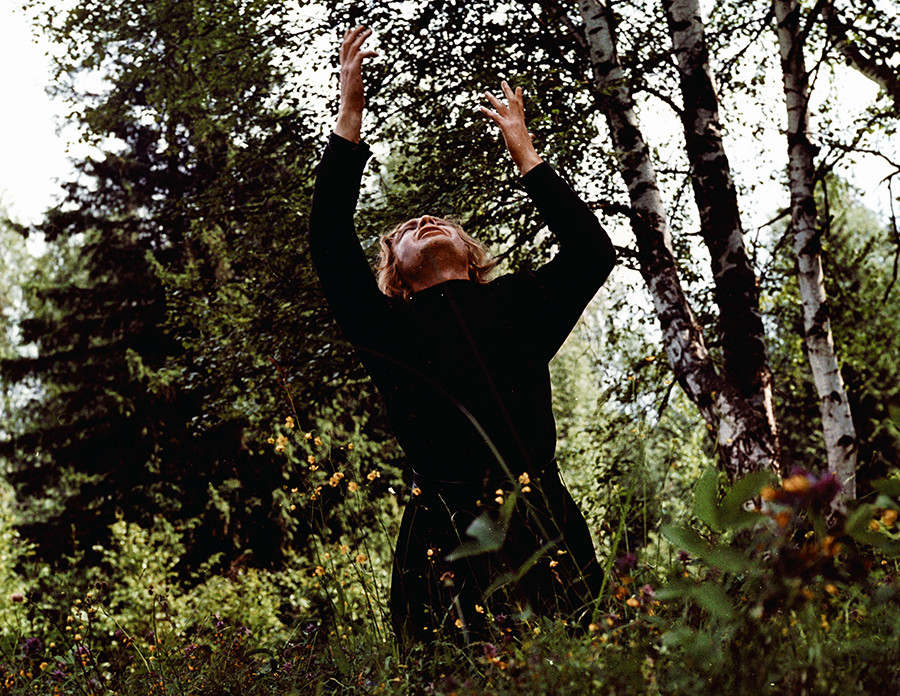 We recently wrote that this novel is one of the leading books about God in Russian literature. In fact, it seems this entire ‘looking-for-meaning’ quest started with Dostoyevsky. He and his St. Petersburg depression led him to reflect much about why and for what do people live. (He had much time in a Siberian prison camp to ponder these questions).

Brothers Alyosha (a monk) and Ivan (an atheist) argue about God and . Which position are you closer to? 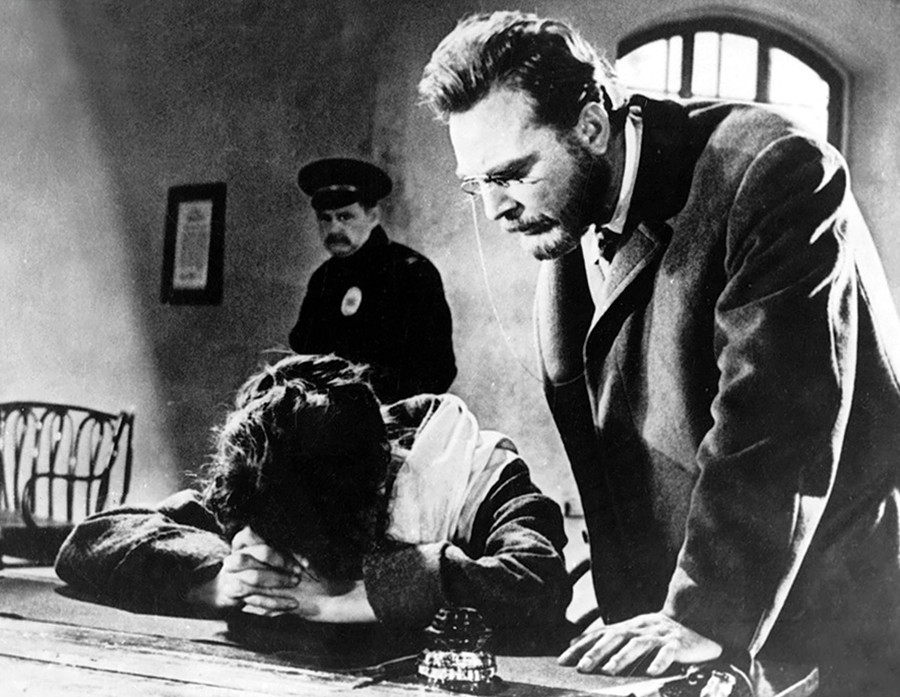 Tolstoy considered this particular novel to be his finest, and he became angry when people praised him only for War and Peace. The writer reflected and worked on it for more than ten years.

A woman was sentenced to a Siberian prison camp by mistake. A member of the jury, Prince Nekhlyudov saw all the and tries to help the woman. It turns out that he had seduced her ten years before, then abandoned her, and now he wants to atone for his sin.

Here, Tolstoy defines one of his main ideas: Do not fight evil with evil.

“And it happened to Nekhludoff, as it often happens to men who are living a spiritual life. The thought that seemed strange at first and paradoxical or even to be only a joke, being confirmed more and more often by life’s experience, suddenly appeared as the simplest, truest certainty. In this way the idea that the only certain means of salvation from the terrible evil from which men were suffering was that they should always acknowledge themselves to be sinning against God, and therefore unable to punish or correct because they were dear to Him. It became clear to him that all the dreadful evil he had been witnessing in prisons and jails, and the quiet self-satisfaction of the perpetrators of this evil were the consequences of men trying to do what was impossible; trying to correct evil while being evil themselves.” 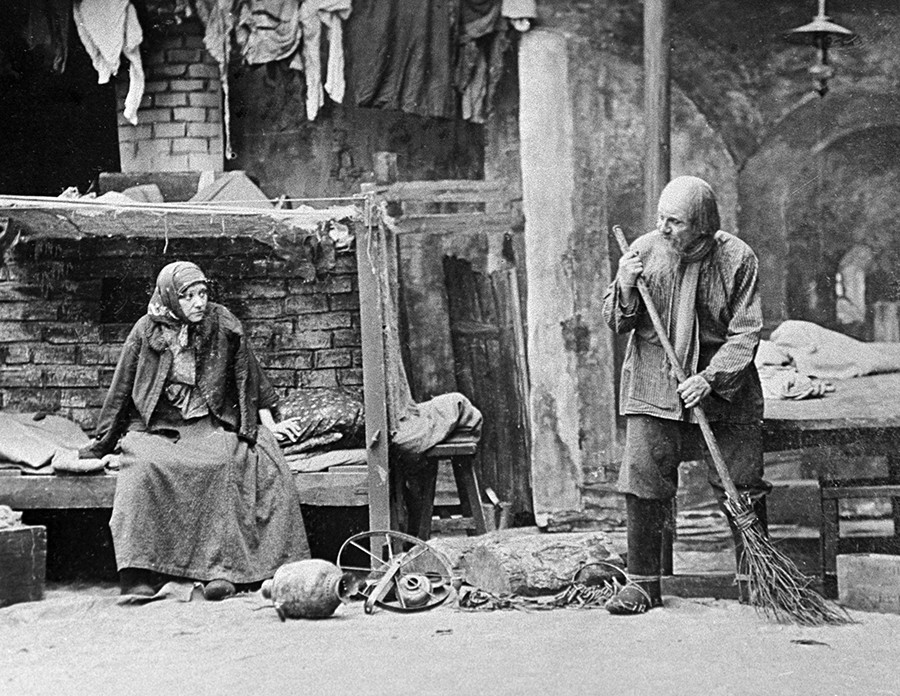 A stranger, Luka, comes to a homeless and sees many different beggars with various life stories. He listens to all of them and tries to offer support. “It’s all the same to me. Crooks – I don’t mind them. For my part there’s no bad flea; they’re all black and they all jump,” he says.

Only in the very lower depths can a person reveal true face. Whoever the person might be, Luka believes that helping those in need is the highest form of morality. “And yet we’re all human beings. Pretend all you want to, put on all the airs you wish, but man you were born, and man you will die. And as I watch I see that the wiser people get the busier they get, and though from bad to worse they still strive to improve.”

Another character, the rude Satin, is Luka’s opponent, and he sometimes tells lies for a good reason. Gorky wrote later that he wanted to raise the question of what’s better: the truth, or compassion and the white lie? What is needed more? A person should rise higher than pity, Gorky thought. 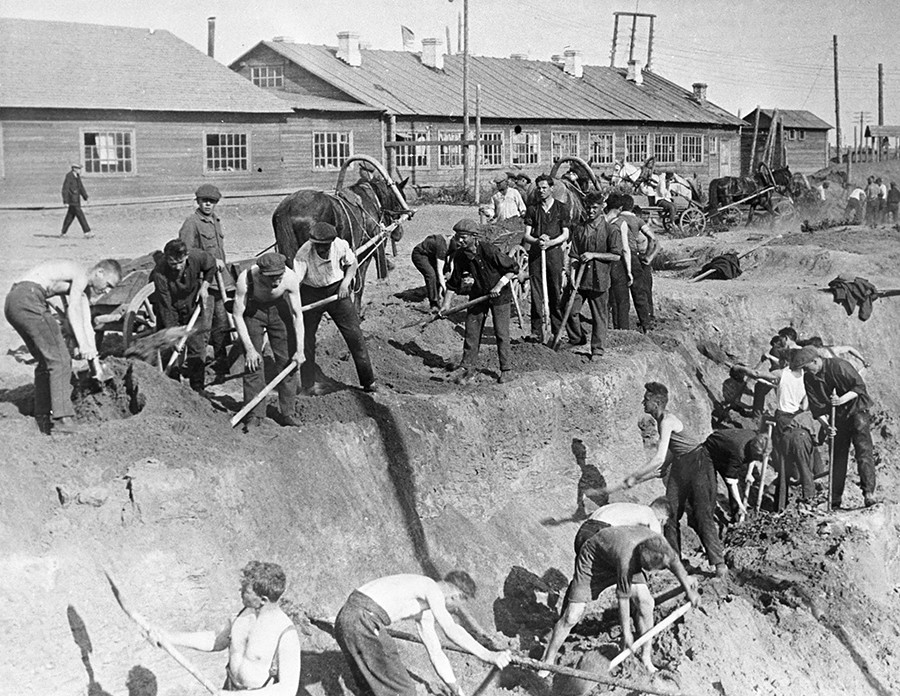 Builders at the Sharikopodshipnik plant digging in the ground, 1930s

This dystopian story favors the pessimistic point of view, that nothing has any meaning. Working people are building a house for the happy proletarian future. Like they only rest for food and and seem not to have any feelings.

Platonov imitates the official Soviet language, and his characters even talk as if they sign those useless documents with exuberant formal vocabulary, even in speeches: “Here, however, rests the substance of creation and the aim and goal of every directive, a small person destined to become the universal element. That’s why it is essential we finish the foundation pit as soon as we can, so that the home may appear more quickly, and childhood personnel may be shielded from ill wind and ailment by a stone wall.”

Well, office plankton can probably learn from this.

7. Mikhail Bulgakov. The Master and Margarita, 1940 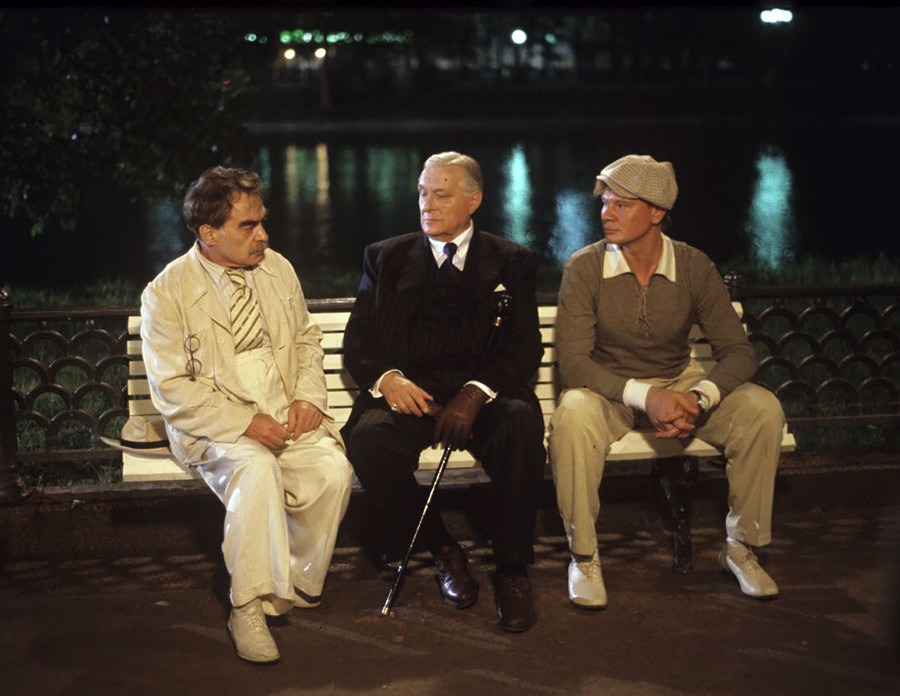 What if a book becomes the purpose of life? If a Master writes something that really matters for himself, then that can be a question of life and death; even when your Margarita signs a contract with the devil to let your book live. “Manuscripts don’t burn,” and characters are than spiritually dead people.

As a result, the eternal powers decide the Master’s destiny, and his labor is rewarded with rest and eternal life.

“‘He [Jesus] has read the master's writings,’ said Matthew the Levite, ‘and asks you to take the master with you and reward him by granting him peace. Would that be hard for you to do, of evil?’ ‘Nothing is hard for me to do,’ replied Woland, ‘as you well know.’ He paused for a while and then ‘Why don’t you take him yourself, to the light?’ ‘He has not earned light, he has earned rest,’ said the Levite sadly.” 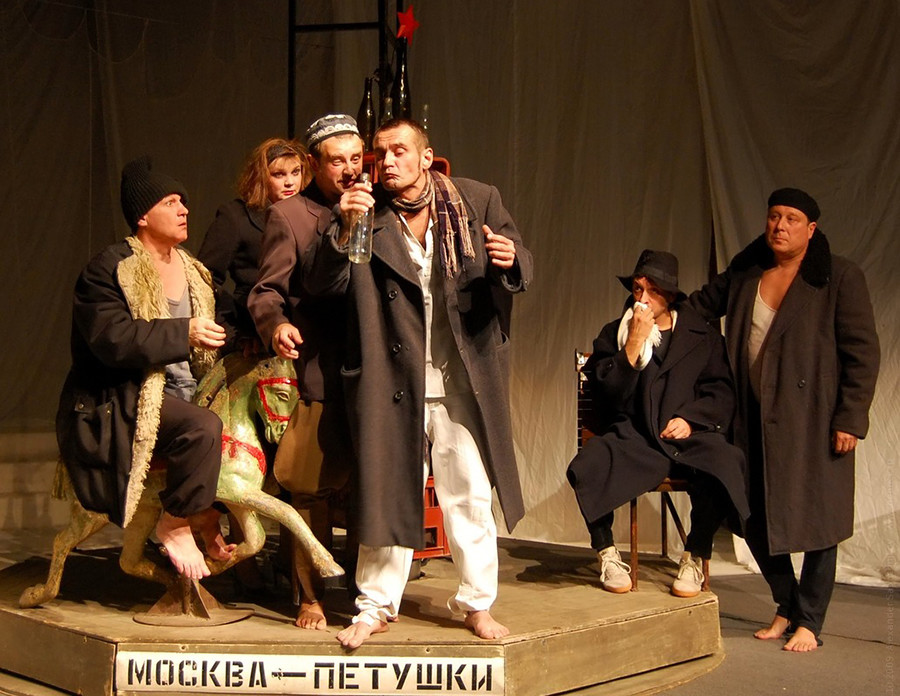 In this cruel world there is no place for the main character, Venichka, and his soul, pure like a newborn. Critics see Venichka as traveling in the (commuter train) not to his beloved woman and child, but to God. He endures suffering just like Jesus Christ, all the while pondering life and death.

“For isn't the life of man a momentary giddiness of the soul? And an eclipse of the soul as well? We are all as if drunk, only everybody in his own way: one person has drunk more, the next less.”

Despite what everyone usually thinks, this novel (or poem, as the author defined it) is not about alcohol consumption. It’s about protesting social rules.

There is a passage that clearly refers to Jesus Christ: “Man should not be lonely – that’s my opinion. should give of himself to people, even if they don’t want to take. But if he is lonely anyway, he should go through the train cars. He should find people and tell them: ‘Look. I’m lonely, I’ll give of myself to the last drop (because I just drank the last drop, ha-ha!) and you give of yourselves to me, and having given, tell me where are we going. From Moscow to Petushki, or from Petushki to Moscow?”

Not sure which Russian books to read? There's so much choice. This quiz will help you figure out which novels best suit your interests.